How to explain one side of Super Earth is smoother than the other side?

A spaceship flew across an unclassified region of the Milky Way galaxy and found a Super Earth in an unnamed system. The planet is almost twice as massive as Earth and is orbiting fairly far away from its parent star. Unfortunately, there is no liquid water and is deemed too cold for settlement. Strangely, one side of the planet has a gigantic flat ice sheet covering half of the planet surface while the other side is ridded with craters some as deep as 20km below global mean surface level. How to explain the finding without magic?

I'm reminded strongly of Iapetus, a moon of Saturn that has a dramatic two-tone coloring. One hemisphere is quite light, while the other is dark. It almost looks like you dunked half of the moon in chocolate: 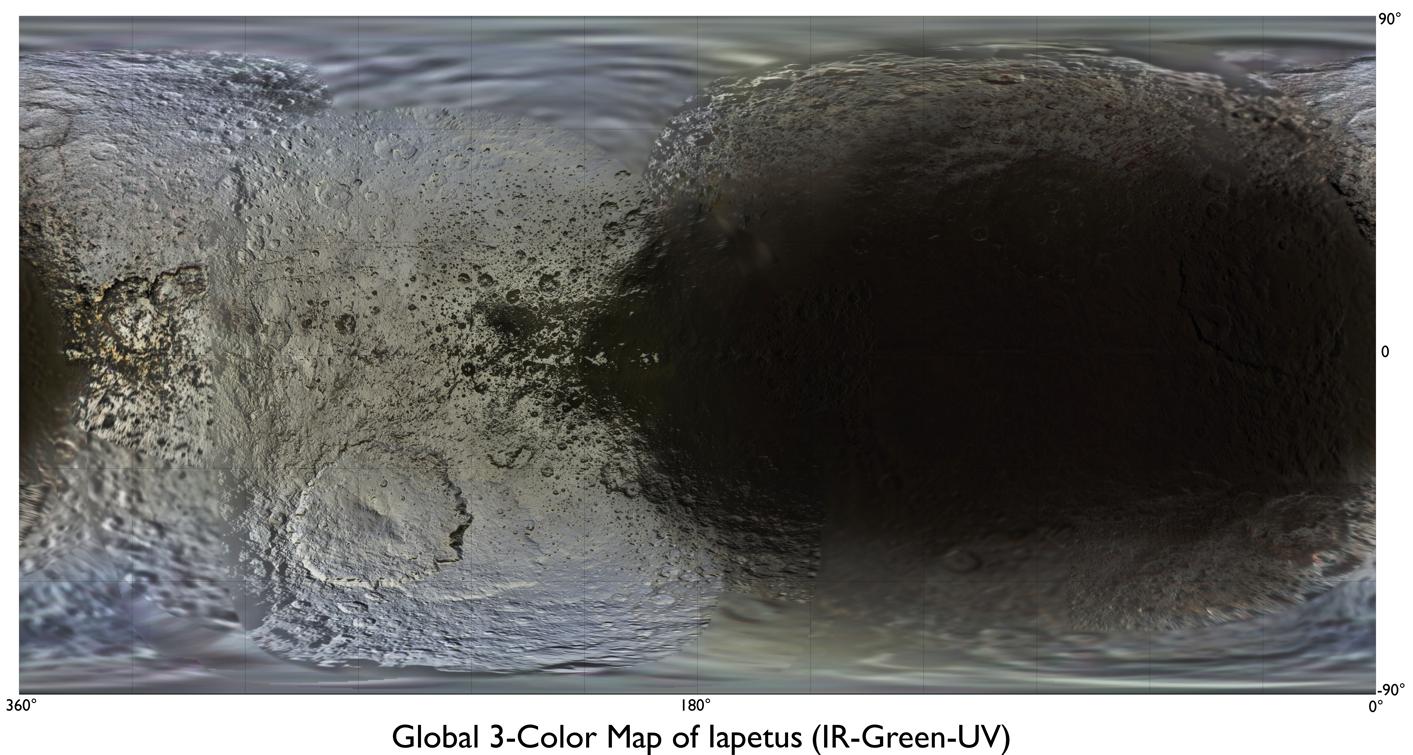 Iapetus is tidally locked, meaning that one side is always the "leading" half of the moon. This means that it easily attracts particles from a giant ring of dust created by the moon Phoebe, which orbits in the opposite direction. One half of Iapetus is dusted by the darker particles, which, a long time ago, kick-started a feedback loop that sublimated ice on one side while keeping it frozen on the other. This self-propagating cycle continued until one hemisphere was dark and one was light.

I can imagine something similar happening here - tidal locking in the past (which would ideally be reversed by some mechanism), and a transfer of material from another planet in a nearby retrograde orbit. It's possible that this transfer could have been a true bombardment, rather than the light dusting Iapetus received. A tight system like TRAPPIST-1 could be useful here, but the retrograde orbit could do weird things with the resonances, so maybe that wouldn't be such a great choice after all. 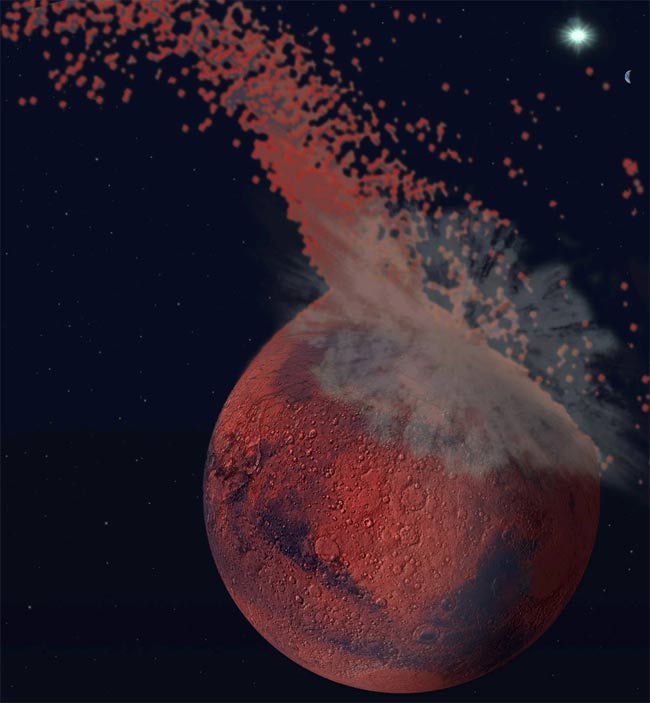 Scientists have been scratching their heads trying to explain the differences between the two sides of Mars for about 30 years. The northern hemisphere of the planet is smooth and low, and some experts think it may have contained a vast ocean long ago. Meanwhile, the southern half of the Martian surface is rough and heavily-cratered, and about 2.5 miles to 5 miles (4 km to 8 km) higher in elevation than the northern basin...

"What we noticed is that the dichotomy boundary around the planet was actually smooth and regular. We tested to see if we could fit this with any shape, and it just so happens that it's almost perfectly fitted by an ellipse. There's only one process that's known to make an elliptical depression like that, and that's a giant impact."

So too your planet. Something big whacked into it hard, flattening out the water side. An impact like that probably softened everything up, and when it equilibrated the new giant hole filled with water, that then froze.

Whatever the big impactor was, it had friends which accounted for the holes on the far side. Or maybe material knocked free from the impact flew out and then eventually back in, digging those craters on the dry side.

Actually, the Moon's far side has much more craters than the near side. You could use this as a starting point: https://www.scientificamerican.com/article/gravity-maps-reveal-why-dark-side-moon-covered-in-craters/

But the latest study suggests that the observed basins do not accurately reflect the size of the initial impact, because as asteroids battered the lunar surface in the early history of the Solar System, the Moon's warmer and softer nearside crust melted like butter, producing giant lava flows that filled the impact craters and transformed them into basins.

Excerpt from the wikipedia article over tidal locking:

In the special case where the orbital eccentricity and obliquity are nearly zero, tidal locking results in one hemisphere of the revolving object constantly facing its partner, an effect known as synchronous rotation. For example, the same side of the Moon always faces the Earth, although there is some libration because the Moon's orbit is not perfectly circular. A tidally locked body in synchronous rotation takes just as long to rotate around its own axis as it does to revolve around its partner.

Just a shot in the dark, but the planet could be tidally locked, similar to our moon, meaning that one side always faces away from the sun. It could be that the side facing away from the sun would have cooled so much as to create a frozen surface of water, while all water from the other side boiled away. The craters on the inner side are caused by meteors, and they show only because there is no frozen ocean covering them, only bare crust.

The best way to get something smooth is to melt it. Tidal locking would do that, as other answers have mentioned, but then you need to spin the thing up again, which is a problem in itself, so it's probably simpler to melt one side of the planet quickly. A massive solar flare or other intense but short-lived increase in the luminosity of the parent star will do this. Dayside melts, smoothing out all of the craters that were there, and then re-freezes. You can decide how far in the past you want this to be to suit your story purposes; you can explain away a lack of re-cratering by having fewer impactors around now than in the past, much as is the case in our own system.

The moon has been slowly breaking apart (was never fully formed) and a lot of its debris hits the planet's surface. Since the moon only ever faces one side of the planet, the other side is unaffected.

Some super-villain had a bad day, and this poor planet stood in his way, so he released his anger on it. This of course assumes that such super-villain exists in your world.

Alternatively this can be result of some short but fierce space battle on planet's orbit, where many shots hit the planet. Everything happened over one side of planet, so another side of it is unaffected.

Earth has been asymmetric in the past

There have been several episodes in earth's geological past when there was only one big continent. The most recent, and most famous, such supercontinent was Pangea. That doesn't give you 20km deep craters, but it does give put all of the visible topography on one side.

There's still an issue with having the ocean remain smooth when it's frozen solid. If you can accept liquid water under a frozen surface, then you still have a smooth surface. Otherwise, maybe you can just stop plate tectonics and have the ocean freeze during a supercontinent episode.

Not the answer you're looking for? Browse other questions tagged planets geology topography or ask your own question.

46
Can a planet be tidally unlocked?

16
How far could a planet be from its star and still be kept habitable by intense greenhouse gases?
2
Could I create a shock on Earth's crust so strong that it would affect the other side of the Earth?
9
How can I find out the length of seasons and solar year on this planet?
11
Humanoids in Super Earth
8
Is this planetary moon's calendar possible?
1
Properties of a planet roughly four times as big as Earth
30
Can there be plants on the dark side of a tidally locked world?
29
How could a planet have one hemisphere way warmer than the other without the planet being tidally locked?
12
Why would one hemisphere of a planet be very mountainous while the other is flat?
7
Giant planet renders one side of its moon deadly, the 'shadow side' habitable. How?