Here is the scenario: A Paleo/Mesozoic mass extinction wiped out 96% of all terrestrial species, and the only plants that survived were as follows:

Once the ashes had cleared, the survivors found more than plenty of room to spread. So each group expanded into four basic forms--tree, shrub, vine and herb. The extinction event happened before the evolution of true angiosperms, so the question is: Could any of the gymnosperm groups independently evolve fruits and flowers like angiosperms?

(Note that the modern view is that extant gymnosperms, the Acrogymospermae, form form a clade; the angiosperms are thought to have evolved from a gymnosperm ancestor; so that the Gymnospermae lato sensu are a paraphyletic grade. Hat tip to Jack Aidley for pointing this out; Wikipedia agrees, quoting M.J.M. Christenhusz, J.L.Reveal, et al. "A new classification and linear sequence of extant gymnosperms", in Phytotaxa 19:55–70, 2011, doi:10.11646/phytotaxa.19.1.3.)

The female reproductive structure of the sago palm Cycas revoluta - from the Montreal Botanical Gardens. Photograph by Nadia Prigoda, available on Wikimedia under the CC BY 2.0 Generic license. 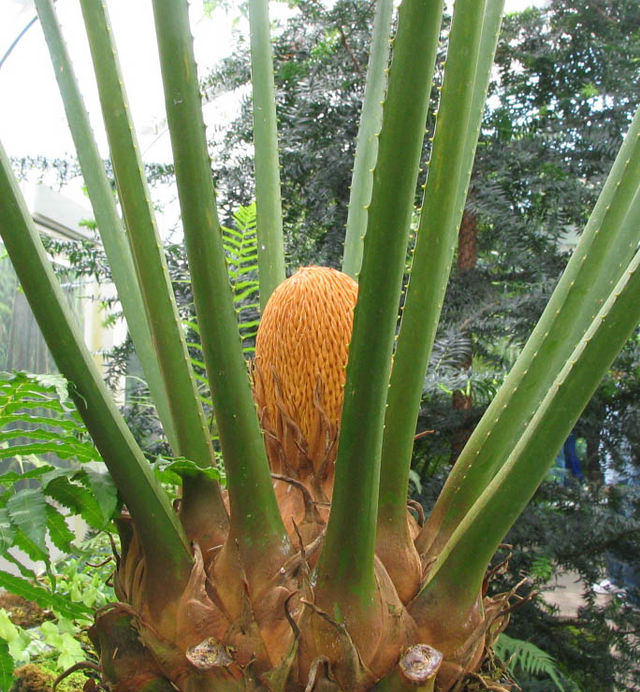 A fleshy female cone of Ephedra intermedia, a gymnosperm shrub. Photograph from Yang Y, Wang Q, "The Earliest Fleshy Cone of Ephedra from the Early Cretaceous Yixian Formation of Northeast China" (2013), PLoS ONE, 8(1): e53652, doi:10.1371/journal.pone.0053652. Available on Wikimedia under the CC BY 4.0 license.

Aril (pseudo-fruit) of Taxus baccata, the yew-tree, a conifer. Photograph by Didier Descouens, available on Wikimedia under the CC BY-SA 4.0 International license.

An aril (pronounced /ˈærɪl/), also called an arillus, is a specialized outgrowth from a seed that partly or completely covers the seed. [...] The aril may create a fruit-like structure, called (among other names) a false fruit. [...] Such arils are also found in a few species of gymnosperms, notably the yews and related conifers such as the lleuque and the kahikatea. Instead of the woody cone typical of most gymnosperms, the reproductive structure of the yew consists of a single seed that becomes surrounded by a fleshy, cup-like covering. This covering is derived from a highly modified cone scale. (Wikipedia, s.v. Aril)

Cycas media (a cycad) megasporophylls with nearly-mature seeds on a wild plant in north Queensland, Australia. Photograph by Tanetahi, available on Wikimedia under the CC BY-SA 4.0 International license.

Edible seeds of Aruacaria angustifolia, a conifer. Photograph by Rodrigomorante, available on Wikimedia under the CC BY 3.0 Unported license.

Yes, because they already did.

AlexP makes some excellent points in the argument above, but he misses the simplest one: angiosperms already evolved from gymnosperms, therefore it must be possible.

As in the answer above, there are several papers both recent and archaic discussing the phylogeny of angiosperms, but most modern plant biologists agree that the flowering plants form a clade within the “naked seed” plants. As Jack Aidley points out, this makes the gymnosperms paraphyletic. At some point, the fruiting bodies that we call, well, fruit - and the flowers that go with them evolved from the gymnosperm forms we see today.

Because it’s happened this way in nature already, it’s entirely possible and even rather likely that your surviving gymnosperms will evolve to fill the evolutionary niches that have been opened by the extinction of the flowering plants. However, it should also be noted that the new species will not be considered a single clade as the angiosperms are today, because they’re emerging from four common ancestors rather than a single one.

Not the answer you're looking for? Browse other questions tagged science-based reality-check biology evolution flora or ask your own question.

21
Could plants develop intelligence?
15
Could plants develop sentience?
28
How could Life develop on a planets with 9 year days
5
How could a dark-skinned race develop light eyes?
5
What evolutionary conditions would force arachnids to develop human-like intelligence?
3
What fruits and vegetable could people grow in the year 6,000 year BC?
11
Could a plant vocalise and how?
15
Mass extinction because of too low CO2-levels
8
What environment could lead to adipose-rich plants, and what would they look like?