How long could humans survive on my planet?

I have created a planet which is a clone of Earth. Except I messed up where wasps, cobras and scorpions were concerned and they have turned out to be the size of elephants (everything in proportion).

Sorry about that, not much I can do now, I'm scared stiff of the blighters.

If I introduced colonies of humans to my planet, how long (if at all) could they be realistically expected to survive? And how would they go about doing so?

Leaving aside the physical issues with elephant-sized insects (and they are many), humans would survive them the same way we survive every other animal species: avoiding their territory when possible, making targeted strikes when we know that a dangerous animal is in the vicinity, and taking advantage of weapons.

The first key thing to realize is that populations of large animals can't be too dense. If they are, there isn't enough food in the area to support them and they must migrate or starve. In the case of carnivores, the food is measured in herbivores; for herbivores, it's plants, but the principle is the same. (For plants, lest you think you can get around this with megaflora to go with your megafauna, the limiting factors are a mix of soil nutrients and available space to catch sunlight.)

Complicating manners, cobras and scorpions are not known for living in large, contiguous family units the way elephants are. Mostly they're encountered one at a time, and the larger versions would likely be the same way. Some wasp species are eusocial and live in large family groups, but mostly likely these would not be able to feed themselves at giant size, so you'd have to start from the solitary wasps.

So instead of huge packs of roaming monsters terrorizing your humans, you're much more likely to be dealing with individual predators with territories from which they drive all other large predators (they have to, or there won't be enough to eat). For the most part humans can simply avoid predators' territories by sticking to their own colony boundaries. Most fatal encounters with animals happen to unfamiliar humans who blunder into the animal's territory; the reverse, with animals actively preying upon humans, can happen but is rare enough that it won't cause an existential threat to your colony.

Simple enough, but what about when you need to expand? Well, the answer is really extremely simple: guns. No matter whether your creatures' chitin is scaled up or not, it won't protect them from larger-caliber bullets. A few pickup trucks with machine guns in the beds would be sufficient to cut off a rampaging giant, herd it away from other humans, and if necessary kill it, all without allowing it to close and attack. (Wasps would need slightly different tactics - they can fly, and might be a good deal faster than the others depending on how you went about solving the scaling problems. But their wings are huge, vulnerable targets at that scale.)

If your colonists don't have guns for whatever reason, their options are considerably more limited but by no means spent. A combination of pit traps for larger animals, nets to slow and ground wasps, long spears, and fire should be sufficient to dispatch pretty much any animal - especially a large, solitary one.

Large creatures have large needs: water, food, space, etc. It would be impossible to have as many hornets on the planet as Earth does with this shift in size.

Therefore, your creatures would be very uncommon, and would only exist in areas that were ideal for their own survival. Humans could happily live everywhere else.

But, what if the giant wasps/snakes/scorpions/etc could live everywhere?

Then humans would live in burrows underground, or caves, or anywhere else where it would be a lot of work for said creature to break through. The smaller the throat of the burrow/cave, the better. You'll note that elephants don't generally dig. Why would they? If they got their head in a hole, what would it buy them? Nothing. So it would be easy enough to avoid your giant creatures (those wasps could be heard flying from miles away. The cobras would be dropping trees in their passage. Maybe the scorpions would be quieter — but not that quiet).

Finally, humans have not only been hunting elephants since the dawn of time, we've successfully domesticated some breeds. This suggests we'd find a way to adapt.

I believe humans would find a way to live on your planet without much trouble.

Start off with a safe village/colony.

People living in the parts of rural Africa with wild lions will surround their villages with thorn bushes the lions don't cross (for example, acacia thorns in East Africa). This doesn't eliminate attacks but it greatly reduces them. 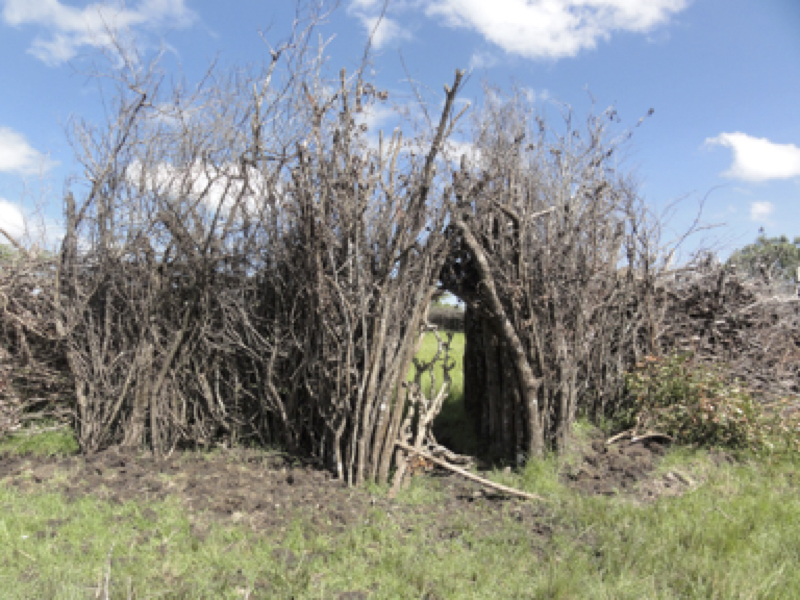 Or a modern version. 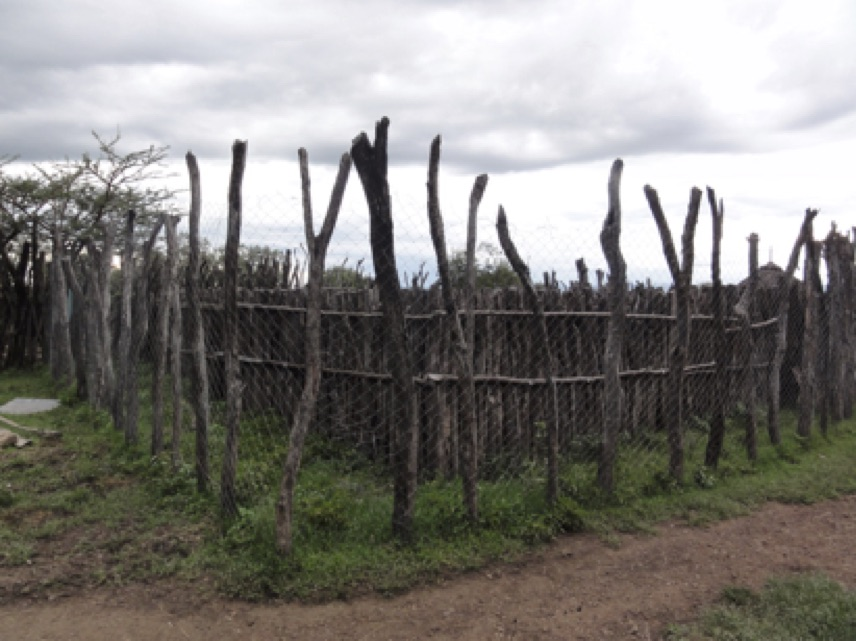 Once you have some protection, you buy time for the settlers to understand the dangers the wildlife pose and how to learn to live with them.

Those fences will keep out the cobras. Some basic land shaping will also keep them away. They won't want to slither on sharp things or rocks or on certain slopes. The colonists will need to run some experiments to see what does and doesn't work. Then they can make very large areas giant snake-free.

The fences can deter scorpions too, if they can't push past the fence or climb over it. Or dig under it (something a snake may also do). Layers of fencing with both thorns (mostly for the snakes) and metal (mostly for the scorpions) are the way to go.

Bury the fences underground a few feet and also curve the top to and add electric barbed wire or something like that.

Then there are wasps. Wasps only harm humans and other large animals if they disturb them or their nests. In our world, it's possible to accidentally step on a ground wasp nest or brush against one in plants, or a wasp might be in your shoe before you put it on (ditto scorpions for that). But giant wasps (or scorpions) there is no way in hell to do this accidentally.

You don't say what kind of wasps they are. Paper wasps are pretty non-aggressive and just want to build their nests under house eaves or the natural equivalent (a cave perhaps for the giants). You can knock down their nests in broad daylight and they won't hurt you. Yellow jackets, on the other hand, build nests mostly in the ground but also other places like walls and trees. They are mean. You don't want to mess with a yellow jacket. 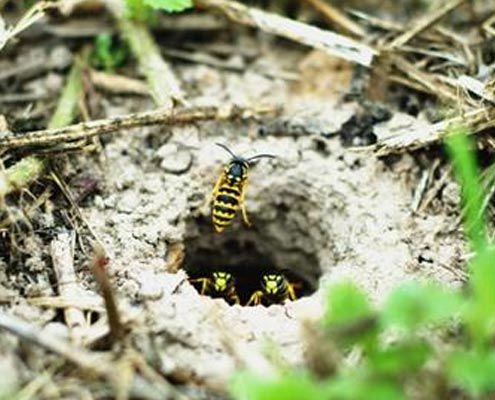 Your best bet with aggressive wasps is to map out their territory and not build or go anywhere near it. Given their size, this is much easier than it is on Earth. Wasps are defensive but they don't go out looking for things to sting or bite (yes, yellow jackets do both). They eat other incests for the most part. Some basic weapons (shotgun that can take down an elephant) should be enough. They are active during the day.

A few colonists will die, especially in the beginning, but mostly should be fine. A fair number of livestock will die, more in the first year or two, but they probably won't die out completely.

Not the answer you're looking for? Browse other questions tagged science-fiction earth-like fauna survival or ask your own question.