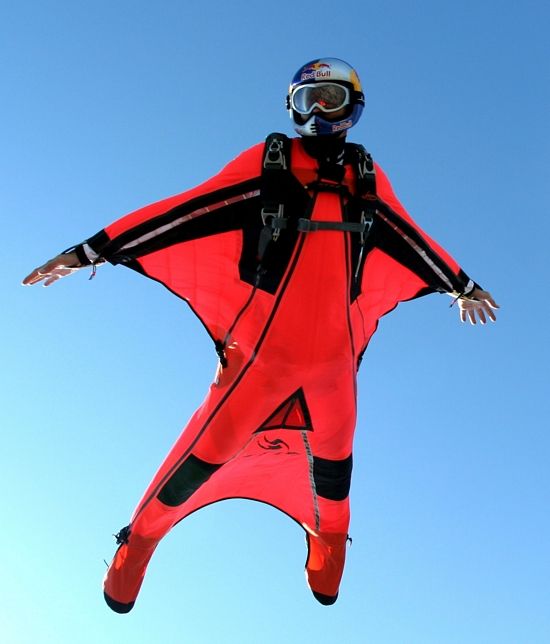 These warriors do not have the technology to make guns but they do have bows and cross bows.

How could they combine bows or cross bows with their wing suits?

I am talking about a hands-free way of firing and reloading arrows while flying (darts will also work). 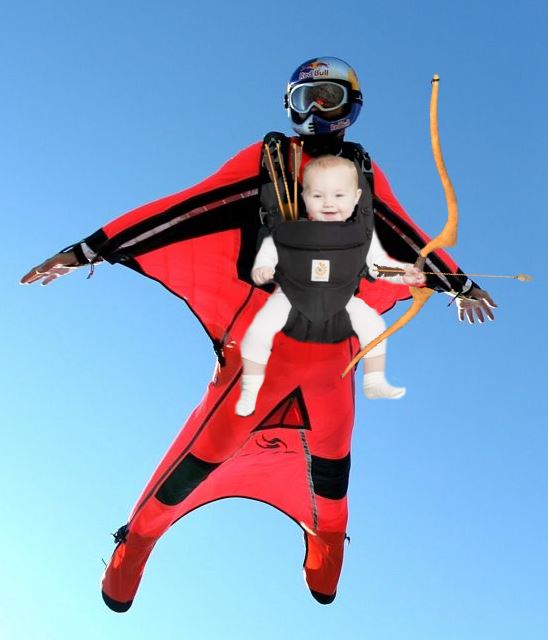 Your warriors are going to need a co-pilot/gunnery officer.

(Note: Despite appearances, this answer does not advocate the weaponization of babies!)

Just go for darts. Already done, and it work.

War darts were used duringg WW1. While not dropped by hand, they were still droped without any complex mecanism. Given enough altitude, kinetic energy was enough to be lethal. 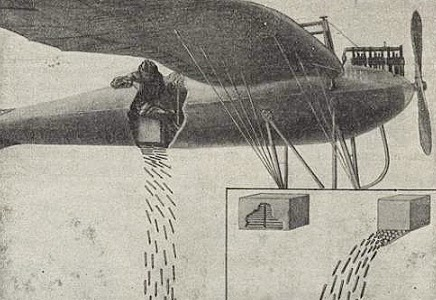 While you can't take as much darts as an aircraft can lift, it can still be enough to harass ennemy, and would be much easyer to use than bow/crossbow

If your world has clockwork, you could (in theory) have a clockwork mechanism that reloads and cocks a spring-fed repeating crossbow, and be activated with a. This probably wouldn't be very powerful, so (as per the original) poison tips could be used to increase the effect. It would also be rather heavy.

You mentioned that the flying warriors control their flight with their hands, thus another possibility would be to have a fixed tail, allowing for a bow to be cocked using the legs. I imagine some sort of stirrup that one pushes back to cock.

Low tech automatic crossbows exist. The Mythbusters built one (though at ballista size). They have a gravity loading magazine, and a crank to pull the string back between shots. You could have the crank mechanism be tied to the pilot rolling or waving their wrist.

An alternative (or maybe an addition) would be to have a sail connected to the bowstring. After the crossbow is fired, the sail is pulled taut, and the force of the wind on the sail pulls (or at least helps to pull) the bowstring back.

Here's the thing. The crossbows you could sell. There are some fairly light but powerful crossbows out there. Crossbows fired by tripwires and pressure plates are moderately well known (you could use the tripwire example as a lampshade).

The reloading? Not so much. Gravity fed magazines stick up and out by design. They add a lot of drag and more weight, neither of which is good for a wingsuit. Plus if the pilot needs to dive or roll, the gravity feeder won't work, or since they are touchy as is, might get out of alignment.

On top of that, neither of the reloading methods are especially believable for a wingsuit. Neither one is going to provide the force to cock a reasonably deadly crossbow, at least without adding a lot of weight or drag. Which, as mentioned before, is bad.

Crossbows as weapons without needing hands, yes. Reloading, not so much.

A 1918 Lewis gun on a Foster mounting fitted to an Avro 504K Night Fighter. The gun trigger is operated by a Bowden cable 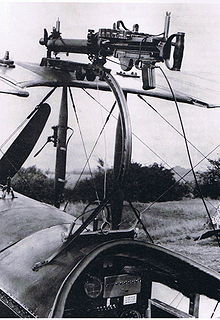 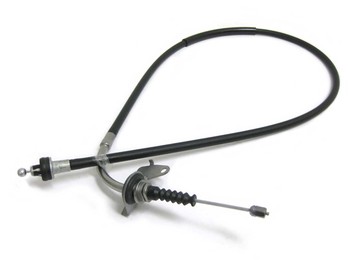 A Bowden cable (/ˈboʊdən/ BOH-dən) is a type of flexible cable used to transmit mechanical force or energy by the movement of an inner cable relative to a hollow outer cable housing. The housing is generally of composite construction, consisting of an inner lining, a longitudinally incompressible layer such as a helical winding or a sheaf of steel wire, and a protective outer covering. 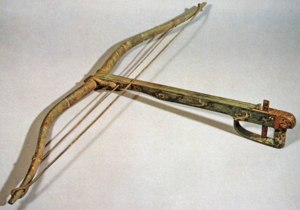 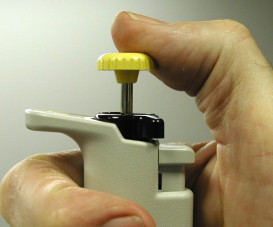 In compound archery, shooting a bow without moving arms us already possible using a back tension release aid. Reloading on the other hand...

By the way, one doesn't fire arrows. Fire as a term relates to firearms. The correct terms are shoot or loose.

While using a wing suit the arms and legs have to maintain a given position to provide lift. Thus cannot be moved to do anything else.

Not being able to use their hands means they cannot reload the weapon.

This immediately rules out the bow, and leaves on the stage only the cross bow.

They might wear a couple of them, one on the back and one on the chest, and have them loaded before they take off.

Once in flight they can fire the weapon by pulling a string with their mouth, once they are aligned with their target.

Your question reminded me very much of the Siyee from Priestess of the White by Trudi Canavan. They are winged people with bat-like wings.

The Siyee are a small race (about the size of a human child) who are light, fragile and have few magical Gifts. They have delicate bones which are easily broken. The thumb and forefinger are the only parts not in the structure of their wings, and their hands are useless for tasks that require strength.

One of the Siyee, Tryss, was an inventor and created a harness that allowed him to fire arrows like an archer while flying.

In his spare time, Tryss made a harness which helps to injure animals, and be used for attack and defense. He tested it out to show others, and ended up gaining the help of Drilli who added a blowpipe to the contraption. He then showed the harness out to the entire group of Siyee, who realised the potential in the device.

You can read more about the harness in the actual book.

Hmm... on second thoughts I think it was a harness that held a blow dart pipe and allowed him to fire darts from it.

Here is a youtube video of a automatic cross-bow. The main problems would be

1) Weight - every extra pound lowers both range and top speed.

2) Aim - Because hands and feet have to stay in the "Flying Squirrel" formation, you'll have to attach it to the warrior's chest and have them point in the general direction.

Depending on the level of technology you're looking for:

They would use a horse bow (also known as a mongolian recurve bow) for the small size and lightness. They would have a mechanism to allow them to briefly lock the wings in extended positions and then retract their hands from the suit in order to fire. They would not be able to maneuver except for minor corrections through their legs while firing but that would be fine to allow strafing runs.

With training they would be able to lock the wings, fire off a few shots, then grab the wings again and continue flying.

Unfortunately, I can't think of an ideal way of doing this. Best I could come up with is some sort of spear system where the pilot releases them with a button or such. But it wouldn't be effective nor would you have enough ammo. If you had people in wing suits, your best bet would just to be to use them as artillery, as aiming is tough and they can't fly indefinitely, so dropping things would be more effective than shooting. Hence heavier objects would be more useful, but then they can't fly...

But I was thinking about your question, and I'm not sure but you say they're flying warriors. If they are in fact flying and can go up and not just glide, (unlike the wingsuit you referenced), then they'd probably have a completely different device. You say the wings expand past the arms. I assume they flap their arms in a similar manner to birds to fly?

Perhaps your warriors would be using something similar to the flying machine in assasins creed?

Maybe it would bend along the center to allow the warriors to move the wings.

If so then you could have a rope over the top that holds the wings in place without the user having their hands in place, so perhaps they can push the wings out with their hands so the rope becomes taut and then equip a bow and arrow, the rope holding the wings at the current extention so they're gliding across the battlefield raining death from above.

Not the answer you're looking for? Browse other questions tagged weapons winged-humans .

15
Weapons for Long-armed (Winged) Dragons?
24
Feasibility of Centaur Hussars
31
Aerial combat: winged humans
7
Autumn/winter clothing for winged humanoids who try to stay out of sight
8
Could a mass-proportional physical speed limit on projectiles "nerf" guns but not ruin archery?
4
What would be the strongest "realistic" bow draw weight with ubertech?
10
What is a plausible weapon to use for a race of angels?