Mechanized infantry of the medieval age

Using resources already available at the time, could medieval age armies form their equivalent of a mechanized infantry and perhaps implement a sort of "blitzkrieg" strategy during battles? If so, how effective would they be?

Blitzkreig has lots of pretty pictures of fast-moving weapons, but the real power of the concept was based on synchronization and a short decision cycle. Weapons and soldiers didn't really move all that fast at all. Example: In 1940, it took over 6 weeks for the German army to reach Paris.

Synchronization can be thought of as the use of pre-planned efforts by multiple units toward a single goal. Example: Multiple units working together across a hundred miles of front to cut off an enemy force and take thousands of POWs, supported by disparate air, artillery, armor, infantry, intelligence, and logistical units.

Decision Cycle can be thought of as the enemy's response time to a friendly move. Having a shorter decision cycle than your enemy is a common way to keep the initiative. Example: If you begin air attacks on unprotected enemy forces, it's the time required for the enemy commander to learn about and understand the problem and bring in air defense units.

Both require good staff work, a years-long system of (professional) military training to build staffs and trust and understanding, thoroughly drilled soldiers, literacy and printing for orders and maps, and reliable instant (or near-instant) communication across the battlefield.

'Reliable' communication is critical here - patchy communication tends to bog down offensives (see WWI) since you cannot effectively coordinate to overcome or bypass newly-emerging problems quickly. That's how you lose the initiative.

Cavalry comes in many variations, from knights with lances in full armor to light horse archers. There are two problems with cavalry:

With a "spearhead" of mounted infantry, a medieval army can get there first with the most and later bring up infantry in support, much like German infantry divisions (on foot, with horse-drawn guns and supplies) followed the Panzer divisions.

The most famous example of "medieval blitzkrieg" was the Mongol armies of Genghis Khan and his immediate successors during several decades of the 13th century.

Of course they were mostly cavalry who not only rode to the battle but usually fought on horseback as mounted archers and mounted lancers, etc., but they did operate siege machines during sieges.

So possibly the Mongol army should be the inspiration for your horse-born medieval version of mechanized infantry.

Or maybe there could be an alternate history where one of the civilized kingdoms in medieval Mexico hires Raramuri or Tarahumara tribesmen, famous for their long distance running ability, as mercenary soldiers to run to the battle zone and out maneuver their enemies like Stonewall Jackson's "foot cavalry" did during his 1862 Valley Campaign.

could medieval age armies form their equivalent of a mechanized infantry?

No, being limited to beasts of burden as source of power, there is nothing that can provide support to mechanized infantry. Chariot mounted archers were the closest thing to what you have in mind, but those are limited to fight in places where a chariot can move at ease.

could medieval age armies implement a sort of "blitzkrieg" strategy during battles?

Not in the concept that we have seen during WWII. First of all, there is the lack of air support, then the cavalry cannot move in depth as much as mechanized infantry can (a truck moves as long as it has a working engine, transmission and fuel, a horse get fatigued), last but not least the logistic necessary to support the blitzkrieg was yet to come: medieval war relied on raiding the territories were it passed, and if you are busy raiding your dinner you cannot move further.

The medieval age had plenty of examples of mechanized infantry.

The medieval period had several examples of mechanized infantry. The war elephant has already been mentioned. Vikings used their boats to approach an enemy target and disgorge an infantry unit very similar to the way an APC or IFV is used today. Of course, they were more limited on land, but did find their boats so useful as mechanized infantry platforms that they sometimes transported them miles over land so they would have access to them in a body of water on the other side.

The best example of medieval mechanized infantry, however, like the Blitzkrieg itself, comes from Germany. Look up the Hussite War Wagon, the "Wagenburg". http://www.thefewgoodmen.com/thefgmforum/threads/the-war-wagon.24186/ (Some good illustrations on this thread)

A war wagon was used something like a mobile fortress, which is precisely the way a tank is used now. The wagon would be moved rapidly, positioned on some tactically important place, and then used to control surrounding territory and even in offense in conjunction with regular infantry (much like a tank, which can control an area, but can't very effectively take ground without infantry). The war wagon came out of the use of early hand cannon and similar firearms, and used this kind of high volume firepower and their inherent armor to hold positions, confine the enemy, protect cavalry, support infantry, and support sieges and other kinds of offensive operations.

Czechs, Hungarians, Poles, Romanians, and Romani, as well as Cossaks were all reported to have used some variant of the war wagon tactic (undoubtedly learning it from one another as they warred over the years). https://en.wikipedia.org/wiki/Wagon_fort

If we go back a little farther than medieval times, we see the use of the war chariot in many different parts of the world. Ancient Assyrians would have a driver, an archer, and multiple infantry on each chariot, so the chariot would act like an APC and drop the infantry close to the action as well as providing fire support and protection. Ancient China used them in a very similar way, right up into the 400s CE. Using cool Chinese technology like the repeating crossbow on a chariot, you can have some pretty high volume firepower and a reasonably protected mechanized infantry platform, assuming you can armor your horse well enough. The Chinese also had what was known as a "Wu Gang Wagon" (武剛車) -which seems to be reasonably similar to the German version of the war wagon used later.

So just there you have war chariots, war elephants, and war wagons, not to mention some of the amazing war machines developed for one off use, which we have examples of in some of the illuminated manuscripts from the time (they built everything from gigantic, bladed wheels to crush enemy soldiers, to multiple spear launchers, to rotating wheels with flails and chains designed to mow down entire rows of opponents, so boiling or flaming oil launchers of various types). Do not underestimate the mechanical ingenuity of the middle ages!

If your aim is only limited on transporting your troops rapidly, this can be done with carriages, I believe there are already some medieval figures who did the same thing. Dragoons in a sense can be said a mechanized infantry as they can rapidly move over their area of responsibility.

But if you plan to use them for blitz? On a limited area scale its probably using signal flags. The aim of blitz is for the enemy unable to respond to your rapid offensive using combined arms. Which in this case is quite limited to cavalry, infantry, heavy equipment 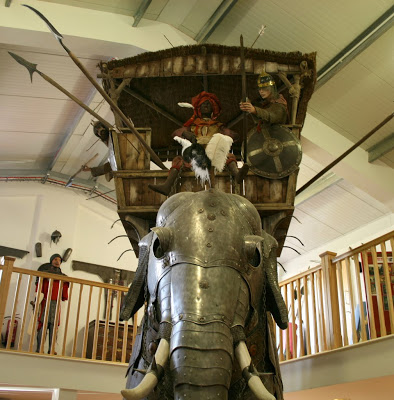 They are intelligent and reliably trainable and have been used in wars for thousands of years (even way before Hannibal struck Rome). Once engaged they and their drivers are going to be difficult to attack and formidable at breaking through lines of cavalry or basic infantry. "Air support" would come in the form of what could be thrown or shot from the castle atop it - archers/slingers, even greek fire bombs thrown.

Once the lines are disrupted it'll then be up to your cavalry to encircle and trap the enemy - all the while the elephants will continue to trample and provoke terror in your foe. In no time your battle's over.

Yes, but not with land-based transport

Substantial overland transport is a relatively new concept. Back then, people simply didn't do it. Roads were in poor condition at best, bandits were a real concern, and carrying any kind of weight or volume of anything (including weaponry) was extremely hard.

Where you absolutely did see blitzkrieg in action though was in naval attacks. Various commanders (Drake is perhaps the most famous for it) devastated coastal towns. The ships' guns provided the equivalent of air or artillery support; and with the docks secured, the sailors and marines were free to land and raid the town.

Not the answer you're looking for? Browse other questions tagged warfare medieval military strategy mechs .

6
Can a medieval age sub turn the tides of war?
1
What could be the consequences of economic isolation in a medieval post-apocalyptic fantasy setting?
12
How can infantry and light cavalry defeat heavy cavalry in a valley?
1
How would widely available and effective sailing affect warfare in a medieval world?
5
How could a medieval army only use unarmed combat and still be effective?
61
Modern warfare theory in a medieval setting
6
Gun & Pike Era Orc army and tactic
8
How to adapt premodern warfare to area-of-effect magic?
4
Is The Use of Mounted Infantry a Viable Tactic for a Nomadic Empire?