TLDR; what would weather be like with minimal axial tilt?

Included is a picture of my climate map and several perspectives of a paper model I made of the planet. The ocean covers over half the planet, which is rather small. It has nearly no tilt, and 2 moons; a bigger moon Aurie that is round but not perfectly circular which has some impact on tides but not too strong, and a smaller moon Chi which is too far and small to have a significant tidal impact. I’m thinking/hoping/praying that with a small tilt comes nearly no seasonal change, yes? Or... Is the tilt vital to life itself? And for that matter, can anybody help me figure out what the weather would be like on a planet with no axial seasons? I know I’m asking a lot, and I’m new to this site so I understand if this is removed. I’ll post an “answer” of my other terrestrial map so you can refer to the areas by name by they are in pretty obvious 4 quarters: NW, NE, SE, SW. 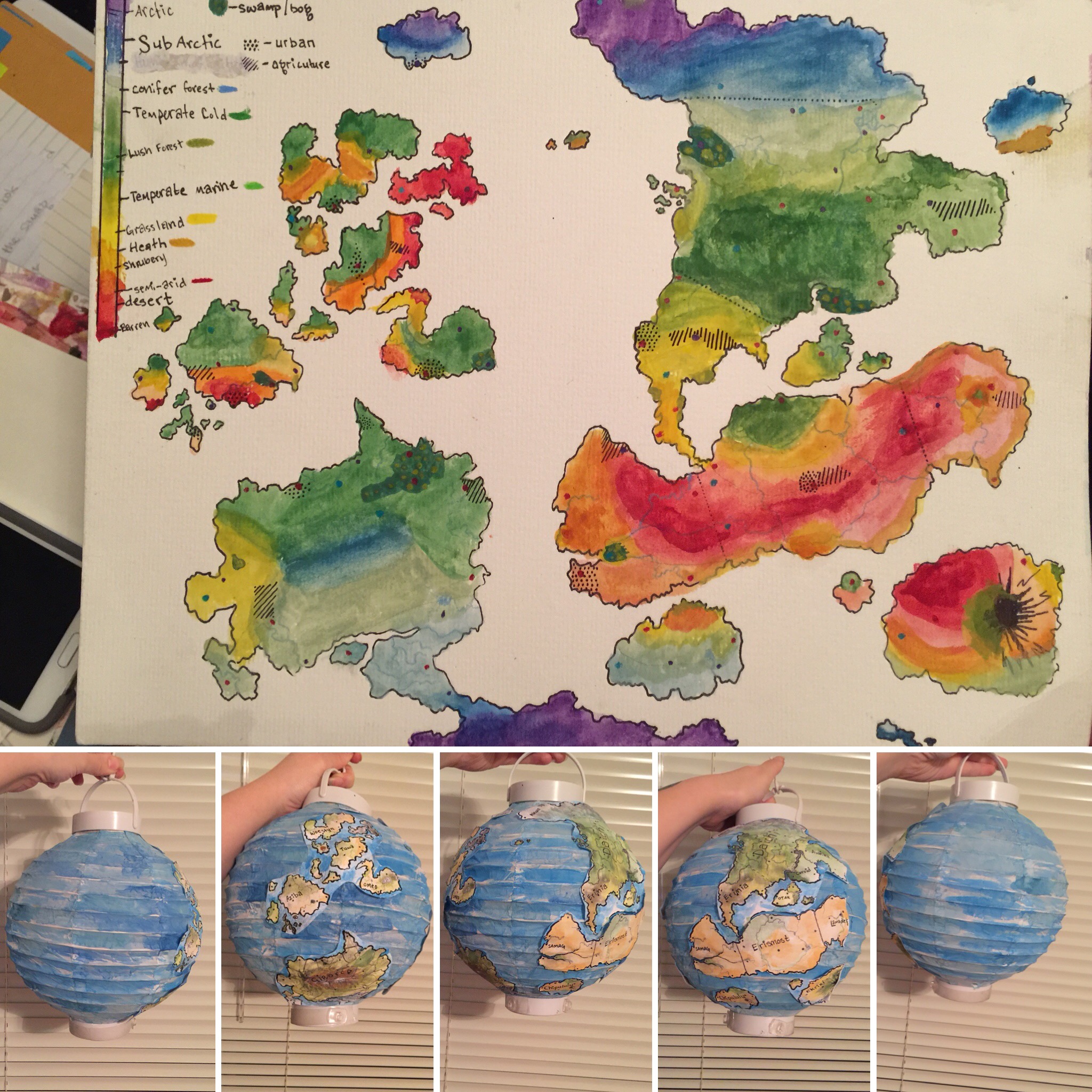 I think I got everything.

I’m thinking/hoping/praying that with a small tilt comes nearly no seasonal change, yes?

Yes and no. On Earth, the tilt means that the amount of radiation most regions get from the sun varies a lot (relatively speaking) through the year. I live a few degrees away from latitude 0, and here we only have two seasons: dry and rainy or, as we like to call them, hot and hotter.

You should have a look at The Left Hand of Darkness, by Ursula K. Le Guin. She depicts a world with near zero axial tilt. The whole world is an icy place throughout the year, with all regions experiencing the same season at the same time. However, the planet has a much more eccentric orbit than Earth, so during some part of the year it gets less radiation due to being a lot farther from the sun. The seasons there are cold, colder, and lethally cold.

Another reason to read is the awesome sci-fi in it, but that's beyond scope for the question.

Or... Is the tilt vital to life itself?

Up to you as the author. If life has a start on the planet, it will evolve to adapt to it.

And for that matter, can anybody help me figure out what the weather would be like on a planet with no axial seasons?

Please ask another question just for this and include:

Depends how you define "mild". Subpolar regions would not have any short summer and would be permanently frozen. There would be no savanna with rainy season, as there would be quite narrow band between tropical rain forest and deserts with effectively no rain. On the other hand in temperate regions you'd have nice growing season for whole year.

I personally would think about rearranging the climate zones on those map, as they look a bit odd (like desert island in SE, which for me should be rather in some temperate zone).

Not the answer you're looking for? Browse other questions tagged reality-check climate weather seasons axial-tilt .

4
What would be the effects of an Earth-like planet with a longer year and longer lunar orbit?
5
Halfday planetary scan: what do you get?
1
Constantly sunlit/shadowed regions and weather
6
Geography and Appearance of an nitrogen/ammonia planet
5
Seasons without an axial tilt?
2
Seasons & days with steep axial tilt?
2
Calendar-Worthy Events on a no-axial spin distant future Earth