On the Atomic Rockets site, there is a series of handy tables, the first of which is aptly named "The Boom Table", providing examples for a wide range of energy releases (in both Joules and TNT equivalent). 3.2×10^26 Joules, or 77 petatons of TNT, is listed as being sufficient to blow away Earth's atmosphere, and presumably cause catastrophic damage to the planet's surface. Assuming the math to determine that this release would be sufficient to nullify a world's atmosphere is accurate, what planetary fortifications would be sufficient to withstand an indirect impact?

Of these three, the subterranean shelter seems most-feasible, but is not without its share of Achilles' heels.

Edit: For clarification, a terrestrial solution would be preferable; simply avoiding the effects of the blast isn't quite the same as sufficiently withstanding it.

Edit 2: By "indirect impact", I mean that the structure is not directly beneath/taking the full brunt of the explosion, but rather situated anywhere between ground zero's perimeter and the opposite side of the world. As for materials from which the shelter would constructed, a near-futuristic (~100 years into the future) technology level may be assumed, and all of the advances in metallurgy and materials sciences that accompany it.

I am also not asking for a structure to be designed, the physics behinds its strength in accompaniment; merely a conceptual presentation as to what sort of structure would be able to withstand the blast wave, given appropriate geography.

You carve out a very large cavern under a mountain, and reinforce its walls with concrete. You now have a massive, hollow cube.

Inside the cube, you build a smaller cube - perhaps three meters less on each side, the sides connected with springs and hydraulic active shock dampers. Sensors and laser meters maintain the proper distance between the walls, within the limits of tolerated acceleration.

And inside that cube, a third cube, which is the real bunker. The space between the cubes is evacuated, and the shock dampers are autonomous and self-contained.

Assuming that the impact is not enough to crack the mountain open (it might crack the outer casing, though), no mechanical shock could travel through the vacuum, and if properly managed, a 3 m end run is enough to counteract enormous shocks (and of course you can design a larger cavity if need be).

The shock wave would travel through the mountain at about 3500 m/s; by building the bunker at a depth of about one kilometer, you get around one third of a second's worth of shock analysis for the dampers to optimally respond.

This is how Cheyenne Mountain was initially armored against nuclear impacts and earthquakes, only written much larger (and using reactive technology instead of just passive springs). 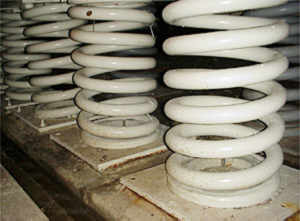 Well, sort of free-floating. If sited in suitably deep water but tethered to the ocean floor with multiple cables then a ‘floating’ fortress will be shielded from the energy above by the depth of the ocean and from the cataclysmic spasms of the earth below by the fact it’s not rigidly bolted to the floor. In deep water there’s no real tidal effects (or wave effects) to worry about (the water has so much space to flow around you that it can’t exert a whole lot of force), so as long as the ocean doesn’t heat up too much and the impact site isn’t close enough to you that the pressure wave from the impact cracks your sub like an egg you should be fine.

One potential issue might be if the tethering stations are compromised or the cables are loosened and then ‘snapped’ taut by ocean currents, but you should be able to deal with that by having a lot of redundant anchors and actively controlling the tension of the cables. Active buoyancy control or even thrusters can also help with avoiding potential problems.

At this point I’m starting to push the definition of ‘fortification’ though. Perhaps you should just take shelter on a deep ocean nuclear sub instead?

Not the answer you're looking for? Browse other questions tagged survival weapon-mass-destruction explosions security space-warfare or ask your own question.