I have an idea for an encounter in my world that goes like this...

A weary group of adventurers are trekking through a great ancient forest. This forest is avoided by most due to strange tales of the forest attacking travelers.

Undeterred, the stalwart group of heroes delves into the foreboding wilderness to reach their goal; an ancient city long thought lost or even a myth. As the days pass, the trails disappear and the forest is clogged with dense underbrush and the trunks of trees are wrapped in vines and ivy.

As they press through the mass of green, they begin to notice thorns from some of the larger vines puncturing their skin and as they begin to realize just how tangled they are, the vines begin to constrict...

Things to consider in an answer:

These types of movements have been termed seismonastic movements. This reflex may have evolved as a defense mechanism to disincentivize predators, or alternatively to shade the plant in order to reduce water lossage due to evaporation. The main structure mechanistically responsible for the drooping of the leaves is the pulvinus. The stimulus is transmitted as an action potential from a stimulated leaflet, to the leaflet's swollen base (pulvinus).... The pulvini cells gain and lose turgor due to water moving in and out of these cells, and multiple ion concentrations play a role in the manipulation of water movement.

When the vines feel they are being moved, they move water within themselves in such a way as to tighten and curl up. This deters predation by preventing a more uniformly thorny surface and that was its original function. Sometimes animals would be caught within the vines because of this action, which led to the additional functions.

Struggling creatures can damage vines. The thorns have a toxin which slows struggling and causes creatures within the vines to be passive.

Thorns absorb nutrients the same way plants absorb nutrients anywhere - via roots, here adventitious roots. The roots are put forth into the dead matter captured within the vines, and ramify within the corpses, filling the space. This has to happen fast because the plant wants the resources of the corpse, and it is in competition with fungi and insect decomposers. At some time later the root shape of a corpse may be the only remaining trace of it.

These vines grow in nutrient poor areas. They do not photosynthesize. Your model is the parasitic plant dodder. 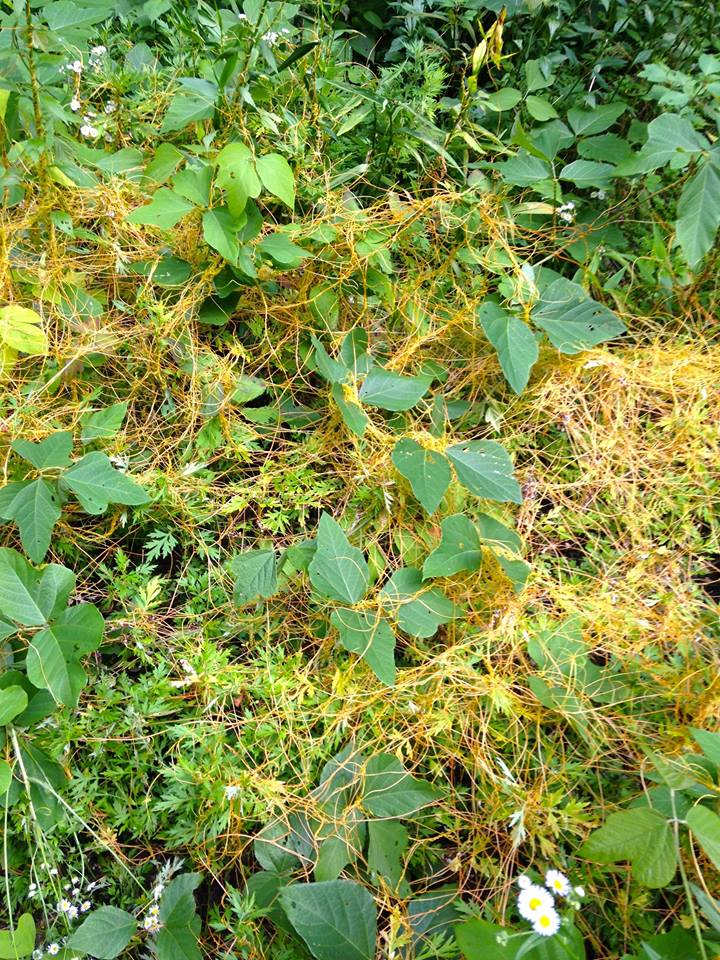 Dodder begin their lives just like any other plants. Seeds in the soil germinate under a certain set of conditions and begin their trek into the sunlight. However, unlike many other plants who spend a lot of their initial energy setting up root systems, dodder only sends out meager baby roots. It says "forget that" and starts searching for a victim. It whips about in a circular motion like a cowboy's lasso. It is looking for the nearest host.

So too your plant (which looks just like dodder, with thorns). It is nonphotosynthetic. It grows on trees and shrubs and whatever it can find. Plants provide plenty of carbohydrates but are poor sources of nitrogen and other nutrients compared to animals and really it uses the tree as a sound anchor, so when the vine scores a big catch it has the leverage to keep it in place. The tree likes this too, because when the vine scores big a lot of the nutrients wind up washing down to and into the ground either from the corpse or from shed vine bits. The tree gets all of those.

Your vines could act like a modified Sundew Plant, Drosera. Long vines hang down from your tree, they grow a form of delicious fruit; your victim pluck a fruit brushing the vine in the process.

Small trigger-hair send a signal to the vine, through Thigmonasty the vines constrict around the victims limb; long hooked thorns hooking into its skin. Your victim thrashes, further entangling the victim in its vines, more thorns hook in painfully. The vines swell as fluid is pumped into them, constricting the victim, pushing the thorns further into the body.

But that's not what kills the victim, no, intense pain shoots through its body as the vine pumps a mixture of enzymes (Sundews use Esterase, peroxidase, phosphatase, and Protease) through its thorns, into its bloodstream, beginning to digest the victim from the inside out. The victims nutrient soup begins to drip onto the vines and ground around the tree, giving them both vital nourishment.

The forest becomes calm, the vines relax, luring its next victim with its delectable fruit, it has become stronger, larger, its host healthier and taller. Nothing remains but a soupy stain on the forest floor.

Have a look at the Wait-a-while plant (There are actually several plants with this name).They actually grow like a bush, but you can easily change the appearance to vine-like. 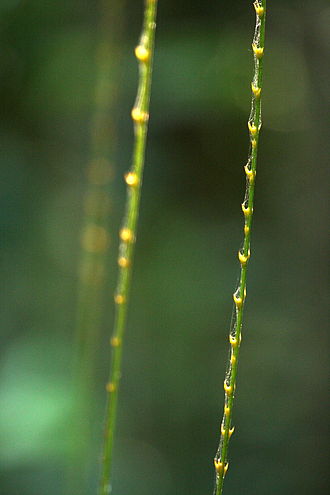 These plants trap animals with their thorns that entangle in the fur and skin. Humans are intelligent enough to stop for a second and move in the opposite direction to untangle themselves (hence the name wait-a-while), but animals panic. The more the animal struggles to free itself, the more it gets entangled, eventually dying of thirst.

Due to the bush-like growth of the real-life wait-a-while, the dead animal now lies within range of the roots. The slowly rotting cadaver fertilizes the plant.

Your Assassin Vines need to reliably catch and kill their victims and then extract nutrients from them.

The catching is done with tiny but sturdy thornes bent towards the vine to best entangle fur. To kill the prey, it's better to use poison (like nettles or jelly fish) than to move the vine around. The panicked, thrashing victims do enough of their own moving around to entangle themselves effectively.

To extract nutrients, the Assassin Vines could grow tiny air roots from buds located under every thorn. The pull on a thorn activates the buds and tiny roots start growing towards the victim. Those roots that "find" the body enter it through wounds, spread inside the cadaver and grow thicker and stronger to extract as much nutrients as possible.

Lets break it down by your bullets

Must rely on other plants (namely trees, though it could work on rocks too) for rigidity

This one is easy, the plant is strong but it does not have the anchorage to hold anything big so it uses other sturdier plants like trees for as anchors, in return the trees get a steady supply of fertilizer. this works well for your story becasue even dead trees provide good anchorage for a long time. Real world parasitic plants already grow into trees like this. Mistletoe anchors itself really solidly into host trees so it makes a good model, and the same rooting mechanism can hold onto other things, although rocks will need a lot of cracks for it to work.

Have thorns, the thorns should be able to siphon bodily fluids (namely blood) as a nutrient source, think of it as a viney mosquito

Thorns are easy, lots of plants have thorns and they will help hold prey. Thorns that siphon blood is more or less pointless, you will not get much blood, once the animal dies blood stops flowing. The plants want everything the animals have not just blood, ignoring the rest of the animal is horribly wasteful and doing both is redundant. You are better off having them do what other carnivorous plants like sundewdo, excretting digestive compounds than absorbing the nutrients through the leaves and vines.

That said if you really want it, make the thorn have exposed capillaries, like hollow tubes running through them. Capillary action will draw in fluids, of course your plant needs to live in very wet conditions or this will dry it out quickly as they will be losing water continuously through these thorns. You also don't want your thorns too big, the bigger they are more likely animals will notice them and avoid the plants, many animals already recognize thorns as things to avoid, small curved thorns that a difficult to see however are prefect for helping catch and hold prey, but they will not be good for piercing very deep.

Be able to contract. It does not need to be aware and intentionally constrict, but should begin to constrict in some manner when creatures get tangled.

again fairly easy, a flailing animal will do a lot of the work for it if the vines grow in a tangle. But there are also several ways for the plant to move, you have the slow movement of normal vines which your plant will likely do as well, this is what you want for lifting animals, it is slow but incredibly powerful.

For faster movement do what sundew do. Now the exact mechanism is not well understood but we know a build up of tension in the tissue beforehand then releasing that tension in involved. you can just say "like sundews". It is reactive to stimuli, fast, and is already used to wrap prey in those plants. In some of them like Drosera glanduligera it is also VERY fast, as fast as muscle movement, but you have a whole range of speeds, and the thicker the vine the slower it will move.

Mutual symbiosis. I want this creature/plant to be parasitic to trees, but I also want the presence of the vines to be a net benefit to the trees. There may be time between creature feedings so the vines will need the stability a tree offers...plus I don't want all the trees to be dead.

Using the trees for anchors works well here again, If they are driving roots into the trees ii is detrimental to the trees but free fertilizer from leftovers and scraps is good for the trees. Depending on how many are growing on a tree is what will control how much they damage the tree, just like in animals lots of parasites start to have a big drain but most hosts can handle a few without issue.

What type of creature in the real world most resembles what I have described?

You are basically using the movement and digestion of sundew, the parasitic anchorage of mistletoe, with a bramble bush thrown in for thorns and tangle and general shape.

This is close to what they should look like. The more they look like normal vines the more successful they will be. 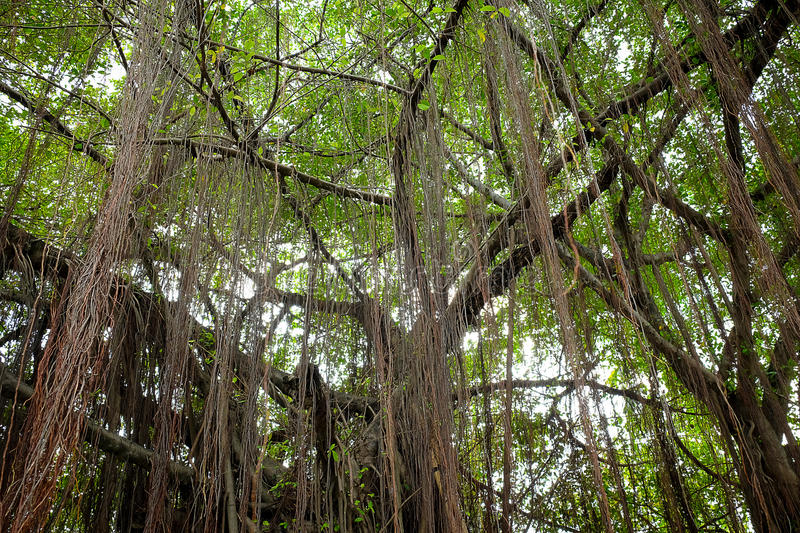 Not the answer you're looking for? Browse other questions tagged science-based creature-design symbiosis or ask your own question.

70
How often must carnivorous grassland eat?

8
Could plants and chemosynthetic bacteria exist in a symbiotic relationship?
6
Symbiotic anti-virus animal
25
Symbiotic benefits for large sentient bio-machine
46
Is it possible for two symbiotic lifeforms to be born from the same egg?
2
Refined symbiotic species, Environment and life
6
Human-fungus symbiotic species
11
Symbiotic barnacles for underwater respiration
3
Designing a symbiotic fungus that could cause a worldwide pandemic