This question is completely just for fun! :)

So in one of my classes, some boys on an another table were debating whether you could toast a marshmallow for smores using a nuclear blast from a nuclear bomb. That made me laugh. So I was wondering…

Could you toast a marshmallow safely using a nuclear blast? Could you eat it?

Short answer is No; not because there isn't enough energy to do so, but because cooking involves the controlled application of thermal energy over a given time.

You can't cook a cake by turning up the heat to double and halving the time that it's in the oven - you end up with a cake that's charred on the outside and still raw on the inside. Conversely, if you put that cake in the oven at half the heat for double the time, it goes hard all the way through.

I'm pretty sure someone is likely to have come up with a formula that accounts for surface area, volume, and density and thermal conductivity (thanks WRB) of material being cooked to derive the right temperature and time to cook a cake, but we've been perfecting the temp and baking times through sheer trial and error, just like we have with marshmallows.

Everyone knows you don't toast a marshmallow by throwing it straight into the fire for a fraction of a second. You hold it on a stick away from the fire, where the radiant heat is low enough that you can hold it there longer, letting the heat work all the way through.

Nuclear blasts don't work that way, by design. They release as much possible thermal heat as they can as quickly as they can, meaning that if you tried to do it, your marshmallow is going to be (if not vaporised) charred on the outside, and not cooked on the inside.

There is probably a point sufficiently away from the blast where the heat is low enough that it would be right for cooking marshmallows, and that heat would even probably be sustained enough to cook it through given the back pressure of dispersal of the thermal energy. I haven't run the math so I'm not sure where that is but as Grant mentions in his comment, it's a moot point; if you're feeling enough heat from the blast to cook a marshmallow, you're being saturated in radiation as well.

In that sense, it's probably 'safe' to eat on the grounds that the act of cooking it has given you a lethal dose of radiation anyway, so it's not what's actually going to kill you. You may as well enjoy your last meal.

According to this Q&A, there doesn't appear to be much of a lower limit on the size on nuclear reactions / explosions. So, at least theoretically, you could toast bread or marshmallows with a nuclear explosion. Assuming you can devise a way to dispense with all the necessary apparatus required to get an explosion actually going.

The smallest nuclear device yet constructed is the Davey Crockett W-54: 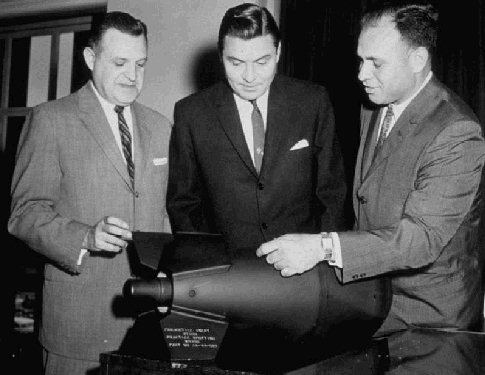 It has a very low yield (the smallest variants seem to be a 10 ton yield): 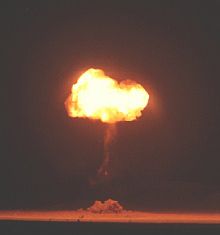 All things considered, the Bureau of Alternative Energy Cookery of Ontario (BAECON) has determined that yes indeed you can cook toast or a marshmallow --- literally nuke your food!

The Bureau suggest setting up several reinforced toasting cages at intervals from the blast site. Due to the vagaries of nuclear cooking devices, one can never be precise when applying heat energy. The Bureau also suggest you wear appropriate PPE for any nuclear cookery tasks.

Piombo of Milan offer a rather snazzy line of lead lined cooking mitts: 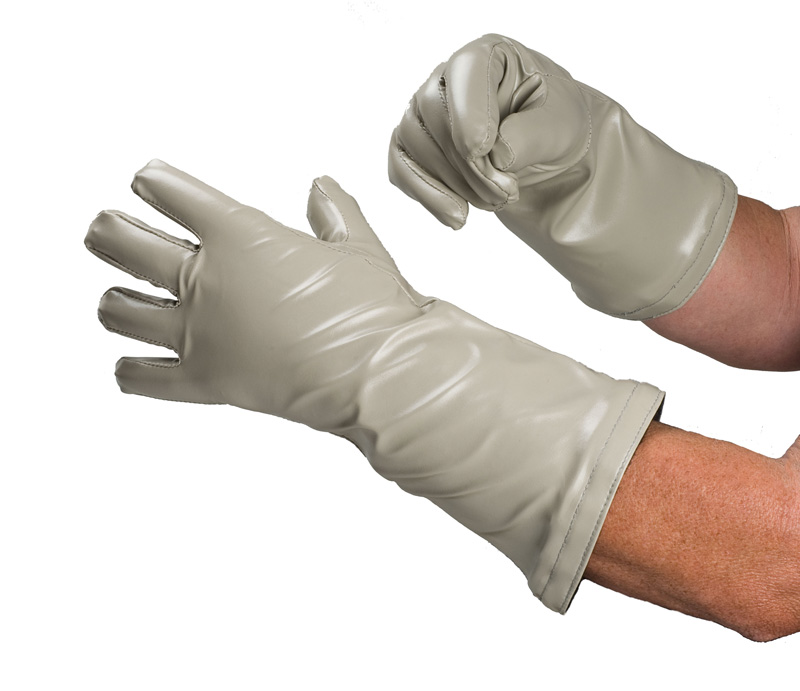 as well as a de mode line of nuclear chef aprons with matching thyroid shields (mask, hat and safety goggles recommended but not mandatory for ordinary nuclear cookery): 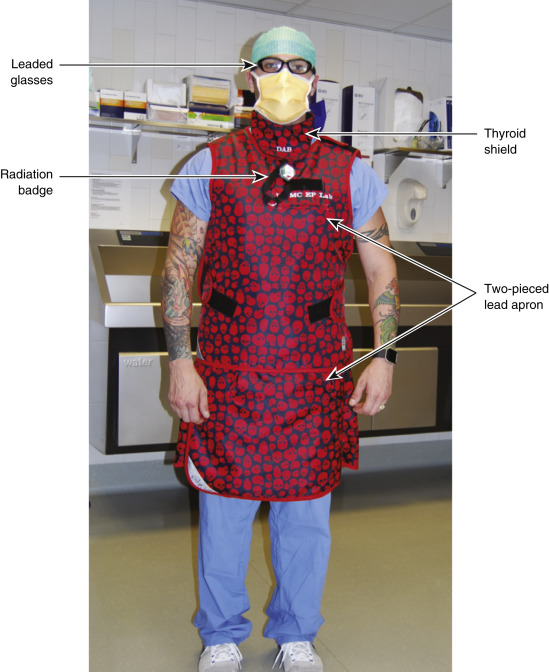 Technically yes, but not with an "open" explosion. Radiation and sustainable heat are the two big counterpoints for why you could not do this, but both can be overcome by putting your marshmallow in a sort of oven. The idea is that you put this oven close enough to the explosion that it dramatically heats up without being melted. With thick heavy metal walls you could prevent the radiation from permeating to the inside of the oven solving the toxicity issue. Then as the metal cools down (if you placed it at just the right distance from the blast), you will have a sustained heat over time on the inside of the oven that will cook your marshmallow. Then you just need to drive up in your radiation gear, fetch your oven, and bring it to a safe eating distance from the fallout.

As an added precaution, your oven may need to be double layered so you can ditch the irradiated outer layer before you open the inner door to prevent accidental contamination.

Not the answer you're looking for? Browse other questions tagged food nuclear or ask your own question.

22
Maggots at a party… How would alien races dine together?
4
Mountains and Nuclear Bombs
7
What if the Trinity test had ignited the atmosphere? Could we survive?
5
Apocalypse design help. Is there any life-sustaining atmosphere which an atomic blast could ignite?
17
Could the entire world have been destroyed by the existing nuclear arsenal in 1962?
3
Transmutation from thin air. Literally(ish)
32
Best places to be on Earth when an all out nuclear World War III breaks out?
7
What does the physiology and biochemistry of a vacuum adapted post-human look like? Part 4: Movement
10
What sort of animals would a civilization of small feline omnivore humanoids domesticate