Calculating City Size based on Population

Question: I'm trying to determine how large (geographically) my city will have to be to accommodate for 1 million people.

I have a city that was basically formed by the gods to be fertile land with a good climate for crops (there are all four seasons) and to look like this: 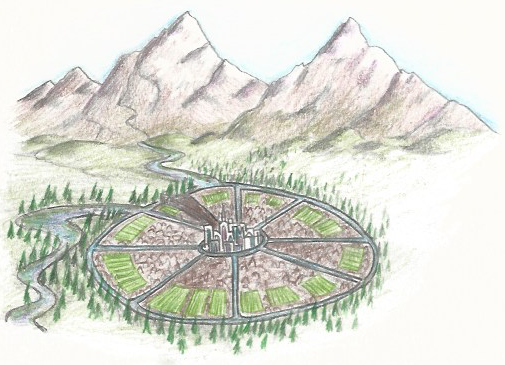 That's not exactly how the river runs around the city, but the basic idea is that the land spirals from the place where the river enters the city down to where it exits.

The city is split by the river into 8 octants, each octant is almost completely identical to the others. In the middle is a huge palace where 8 rulers live, surrounding the palace is the octant "administration building" then immediately out from that is where other normal city buildings are (textile shops, hospitals, etc.).

From there you get to people's dwellings. The dwellings can definitely be multi-story apartment-like buildings. They're very effective at building tall/strong glass buildings (their magic system helps with that and the tall palace is evidence of this). The dwellings are arranged so that the people who work in the center of the city first, then people who work further out second. Then you get to the second layer of normal city buildings (so there's an inner hospital and an outer hospital for each octant). Finally you get to a third set of dwellings for the people who work out in the fields (farm and livestock land) and forests which surround the city.

Here are some useful bits of context:

So what I need to determine is what the diameter of the city would need to be to accommodate ~1 million people. How big would the fields need to be in relation to the dwellings etc. I need to know this so I can accurately describe how long it would take someone to travel from the palace to the outside of the city given various modes of transportation (walking, riding in a carriage, and riding on a barge on the river).

I found this on farmland necessary to sustain some amount of people: How many people can you feed per square-kilometer of farmland? so using conventional farming (no hydroponics, magic, or crazy stuff), you'd get around 2350 people per km2. Flip it around and that's about 425 km2 for a million people.

Ok, then I looked up population density for one of the major US cities that I'm familiar with. About 3662 people / mi2 or 1400ish people / km2. That's about 715km2 for a million! This metric isn't ideal at all since medieval london was around 100 people/km2 which is a huge difference so you'll have to play around with this number. I read that ancient Rome (city of Rome) had around 1 million inhabitants so that might be a good reference as well

oh and the average human walking speed is about 3.1 mph so on a clear cross-cutting road, it'd take 8 hours to make it across with no breaks or obstacles.

In the picture you provided the fields seem to be enclosed by walls and thereby probably count towards the city size.

Rest of the city: I used London at the beginning of the 19th century (at that time it had a million in population) and encompassed 122 miles2 or 312.32 km2.

Without consideration for comfort and open space you can look at the list and pick Manila as your model.

The highest density city in the world at 119,600 per square mile, you'd need less than 10 square miles for your city of 1million. The thing to note is that Manila isn't really high rise. It's very densely packed low and medium rise with minimal open space.

Apartments or houses? Apartments are far more efficient when it comes to regards to their footprint. In the 1800, my guess is that the average household had about 4 to 5 people. Hence, you would need 200,000 to 250,000 housing units.

Class system will greatly influence the floor space per each housing unit. My lowest class, get about 40m2 apartment, or a 400m2 plot of land for a house. My 'rich' get 2500m2 plots for their houses.

My previous research yielded that a loaf of bread needs 1m2 of field space. A cow and a calf need about 1ha of grazing space. A chicken would need only 4m2 of space.

81
How many people can you feed per square-kilometer of farmland?
3
Largest Population for Ancient World Migration/Encampment

14
A city of Sand...stone
20
What would be the state of decay in an abandoned city?
13
Architectural considerations for a city in a wind tunnel
4
Would it be possible to build a city out of only oxygen, silicon, aluminum and iron?
8
What's necessary for this stratified, flood-prone city to be plausible?
1
Nomad tribe population
3
Need a North American location with a large city and whitewater river for post-apocalyptic fiction
8
Size of a flying city based on dirigibles
9
How big would a city of crops need to be to minimise all agricultural land use?