In my world, a species of vertically challenged humanoids spreads out from their island homelands to the wider world, entering the interspecies race for global dominance. Now, this species of humanoids are quite disadvantaged in a straight fight against any other, being the smallest at but 1.1 meters tall, however, this in reality is a contest not of might, but niche effectiveness. You see, hominids are all more or less generalist / opportunistic hunters - animals that are broadly omnivorous (eating berries, seeds, certain foliage, etc) and broadly predatory, hunting game of any size. Hominids were very, very, good at this strategy, which allowed them to spread anywhere such calorie sources were available (i.e. everywhere on Gaia's green earth). That being said, there exists an ecological concept called Competitive Exclusion Principal, where when two species occupy the same niche in the same area, they compete, and whichever species exploits the niche most effectively displaced the other.

Now, generalist is truly a contest of "who can exploit the most calories in a given area" and, given a more diverse food set, the most general generalist wins. Here in lies the most ultimate prize in untapped calories for a hominid — grass (and leaves). Very few generalist exploit this nigh-omnipresent food source*, and the sheer amount of it could keep a hominid fat when most others would starve, allowing them greater population and a greater range than any other, along with an easy way to outcompete its competition. However, two problems abound:

Seeing as how even the best grazers and browsers have, at best, middling solutions for these issue given millions of years of evolution, a purely evolutionary solution is unrealistic. So now we turn to the human ability to develop skills and technique.

What technique could be implemented to release the most calories from grass and leaves?

Note: Yes, I am aware that cereals and corn count as grass, but human consumed varieties are far fewer and are more work and resource intensive to produce

Cooking plant materials takes care of the problem of the grasses being too hard on our teeth or digestive systems. In many cases, breaking down the fibers and so forth will release more calories and micronutrients. Some of this can also be done with fermentation.

Once a species has the ability to make and control fire, and to make a few tools such as clay pots, cooking is an easy task, along with gathering. Eating and digesting are faster, so overall it doesn't take more time in a society large enough to have specialists (pot makers, fire tenders, wood or dung gatherers, etc).

The problem is that most grasses (aside from the grain portion and a few exceptions like sugarcane) are not suitable human food. They don't provide enough nutrition for hominids in general.

The only ways to change that are:

If you are truly looking to be quicker than evolution and to use "the human ability to develop skills and technique" your answers are:

None, in the long term. There were hominids who lived this way, the grasslands dried up or predators expanded or something else happened and they no longer exist. The reason hominids are so widespread is precisely because of being adaptable. The grass eating monkeys alive today are only able to exist in a tiny area because it's not easy to get at.

There are zero apes living solely off grass. Because they're not competing a niche against genaralist hominids, they're competing a niche against wild cattle and other bigger, faster, more suited animals. They cannot outrun predators or fight them. If they had the size and strength of Gorillas it might be different. Gorillas just need to eat, there isn't usually a need for speed, they're strong enough to tear a predator limb from limb.

In later times it would be impossible because you're not competing with generalist hominids who don't consume grass, because they do consume grass via their animals. You'd be a pest eating livestock food. Nasty things happen when animals or even people get in the way of farmers and herdsmen. The Bush people of Africa would be an example.

Hominids have other mammals eat the grass for them, and in return keep these animals safe and fed. 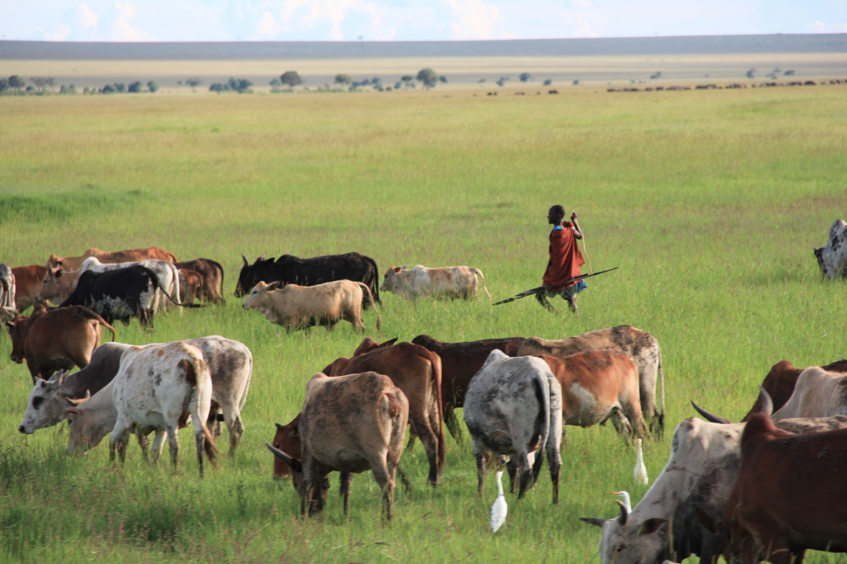 It requires a lot of adaptations to efficiently thrive on a grass diet. Starting from a hominid body plan, in the short to intermediate term a grass diet means a suboptimal result - something like a panda, or Gigantopithecus.

But hominids are good at planning, scheming, planned aggression, remembering and cooperation. Intelligence is not adaptive for a diet of grass, but things that live on a diet of grass can benefit by their association with a human that can use his or her intelligence of behalf of the grazers.

Thus: pastoralism. The human shepherd or cowherd manages the herd of herbivores - anticipating their needs and moving them accordingly and protecting them from predation. With human help, the domestic grazers handily outcompete their wild relatives. In exchange the herbivores transform the grass into their meat and milk and support the humans with these transformed grass calories.

This is not science fiction.

Isn't wheat a grass? Along with rice, corn, oats, barley - even pineapple?

'What technique could be implemented to release the most calories from grass and leaves?'

There are two proven methods.

The second is bacterial action to break down the cellulose.

Farmers use silage techniques (non-aerobic bacteria) to break down grasses for long-term storage.

Perhaps you might like to look at fermenting silage into a drink or a mash? There is enough protein in grass to sustain life, the trick is to unlock it from he cellulose.

Grass will break down in a compost heap, the trick is to not keep it all bunched together, but mixing it in with other organics.

If you want to hand-wave away the details, for a fictional story imagining that they have perfected a method of composting grass using silage techniques, and then fermenting the product into a mash, seems plausible enough.

Humans, as they are, may harvest the grasses that sprout after a rainfall. This is close enough to sprouting.

The disadvantage is limitation to some time of the year. If they began farming, then it is possible to extend that period. Also, pay attention to the "health concerns" paragraph in the link. The humans would still need additional food sources. The changes needed for a human to feed on grass may be too much of a leap forward within your timeframe.

The problem is not processing the grass, it is how little nutrition grass and leaves contain compared to how much a hominid needs.

Hominids have large brain, large brains demand a lot of calories. 1/3rd of all the calories a human eats goes to just support a 3lb brain. So just to start off hominids need more calories than a different animal of the same size.

Even if you solve the problem they will never eat enough. Leaves has very few calories, even leaves humans have bred for consumption have pathetically little calories. cabbage (a high calorie leaf) for instance has 0.1-0.2 calories per gram, compare a peanut 6 calories per gram. this is why grazers/browsers have to eat a LOT of grass. An active human needs about 3000kcal per day, that's about 50-60 lbs of foliage per day (compared to the 4-5lbs of food humans normally eat). Lets say they have manage to extract every iota of nutrition from the foliage and get twice its value, thats still 25-30lbs of grass a day, your creatures are going to do nothing but eat just to get enough food into their gut, and that is assuming you solve the digestibility problem.

Why you won't solve the problem. The problem with leaves is they are low in calories and it is hard to extract, because most of the caloric value is in cellulose, fiber. The only animals that can digest cellulose do so by using gut bacteria to ferment the cellulose, this however is slow and costs calories that the gut bacteria use for themselves. They are essentially secondary consumers who store the primary consumers inside. The other solution is just to eat huge quantities and ignore the fiber, this means they are eating even more than before. Both require the fiber to broken down in to as small of pieces as possible, this is why animals spend hours chewing up foliage before digesting it. Mechanical processing could replace this but it will still take a great deal of time.

So lets take the perfect scenario for your creature. Your creatures collect 100lbs of foliage to eat maybe an hour or two of time, are now spending dozens of hours grinding up (querns took hours to grind small quantities of wheat you are grinding a hundred pounds of leaves), then ferment it in casks or just eat more, either way you have losses, hence doubling how much they have to eat (which is probably generous). Then they cook it to free up anything that is left and make it easier to extract, maybe an hour or two. Then they actually have to eat a hundred of pounds of the porridge/slurry to get enough calories which will also take hours. Your creature has just spend the entire day doing nothing but preparing and eating its food. It still needs 8 hours of sleep. that's more time than there is in a day. Worse every free hour they have is spent making querns and casks for food.

Compare the human hunter gatherer that is spending 3-5 hours per day feeding itself and has the rest of the time to do other things.

Making the animal smaller makes it even worse since its gut has to be smaller, and it's body is less efficient with its calories (square cubed law in play). The size of the gut determines how much they get out of their food. Hominids have short guts to begin with since they eat high value foods, so losses are less of an issue, but your creatures need every calorie. Even if it was human sized it would need to have a much large gut than a human, meaning the rest of it needs to be smaller to keep its mass down. This is why bulk feeder are usually very large, it allows for a huge gut and increases caloric efficiency to boot.

If you want it to be an herbivore just have it eat fruits and grains, it will be able to sustain itself no problem, although even then there is only a few exclusive herbivores on earth, most herbivores are also opportunistic carnivores.

31
Strategy to make extraterrestrials fear us
7
The Next Dinosaur Titans
20
The Centaur--Let's Get Real, Shall We?
4
Could the World's Rainshadows Have Spiny Forests?
19
Eating Titan's oceans
16
Why would humans be the dominant species?
1
Domesticating rockfolk
4
Would crossbreeding between humans and trolls always be taboo?
8
What kind of daily combat or exercises should see regular soldiers burn 6,000 to 7,000 calories a day?
3
Carnivorous humanoids & the quest for a balanced diet