“Landing” a small asteroid on Earth

I've been poking around similar posts, but none seem to contain the information I'm looking for. I'll try to keep it brief.

In the year 20XX, some powerful organizations are trying to "land" an asteroid using a combination of aerobraking, carefully planned orbits around the sun, and a powerful swarm of rocket engines.

Rocket launches have become significantly cheaper in this time period than they were in the early 21st century. The plan is to send a rocket swarm to a relatively small metallic asteroid --possibly no more than 20m-100m across-- and tow it ahead of earth's orbit around the sun. Over the course of X years, the asteroid will be decelerated to the point that the earth will slowly catch up to it in a relatively gentle manner until it begins a controlled re-entry using a combination of natural aerobraking, parachutes, and a final burn by the attached rockets. Hopefully, by the time the rock lands, nobody dies and some billionaires become even wealthier.

Q: Utilizing current or projected near-future technologies and assuming that rocket launches become very cheap and routine, is it plausible to "land" an asteroid in the way described or will the earth's gravity just re-accelerate it to apocalyptic speeds?

As proposed, your question isn't based on realistic orbital mechanics. Placing an asteroid on Earth's orbital trajectory but "ahead" of it would be inherently unstable for the asteroid unless it was at the L4 Lagrange point. Even if this was a stable configuration, slowing down would change the orbital trajectory (the orbit would become "lower" or closer to the sun, and more elliptical) and Earth wouldn't "catch up" to it because they would be in different orbits. To actually get an asteroid to Earth, you would want to first put it into some Earth-centric orbit. This would be done using the same methods used for spacecraft: taking advantage of favorable conditions for flybys with other bodies to alter trajectories (slowing, changing direction), possibly spreading high-efficiency thrust over long periods (e.g. with ion thrusters), entering the Earth-Moon system on a low-energy transfer orbit, and then using rockets to enter directly into Earth orbit. In fact, NASA was going to do this with a roughly 4m asteroid but ARM was cancelled in the 2018 budget. Obviously as the asteroid size increases, the mission costs increase by at least the cube of that (volume being proportional to the cube of radius), but this would be doable with your cheaply launched rockets.

I see that others have already done an in-depth analysis of the energy requirements in some form or another so I wont get too deep into the actual landing. I will say that if cost is no object there is probably a way to do this using a combination of methods such as aerobraking, heat shielding (coatings and bolt-ons), supersonic drag chutes, and thrusters. If all else failed the asteroid could be separated into smaller pieces, which would guarantee a workable solution if you broke it into enough pieces. This depends on if landing as one chunk of rock is a hard requirement. Here is a similar question, to which someone gave a much more complete response.

If this setting is science-based, I would take a hard look at how much you need the asteroid to be on the surface. Can what you need be done in orbit? What about lunar orbit? Can you take only certain parts/materials of the asteroid to the surface? If you are going to consider the costs at all, I have a feeling that landing an asteroid on Earth is going to be prohibitively expensive.

I don't think it is plausible.

Let's simplify the scenario, assuming the asteroid is a sphere. For 20 m radius we have a volume of

If this body is orbiting Earth, it will be moving at about 7 $km \over s$, while on landing it will be still. It means we need a way to dissipate its kinetic energy, which will be

Even assuming that we can double the payload of a Saturn V while keeping its mass constant, we would still need 155 of them to perform the trick.

If you assume you can have 1 launch per day with no interruptions it would take about 9 years just to assemble the whole thing in LEO. And, as AlexP pointed out in their comment, all of this would need to cost less than the price of Earth harvested iron. That would happen, at present prices, if the rockets costed less than $3000000 \over 3251$$\approx 1000 $ $ per launch. Not even a car is so cheap.

Therefore, no, I don't think it is possible.

You can probably do this, but it'll be very hard

To do it the way you suggested is probably not the best way. Having the orbit follow the same as earth's is unnecessary, and will cost a lot more energy that would be better used elsewhere.

To make it less hard you should:

There's two big problems with your approach, besides those other answers have mentioned.

First is orbital mechanics. You say that you will start by moving the asteroid to a solar orbit similar to Earth's, then slow it down so Earth catches up. This doesn't work how you think it does. When you slow it down relative to the sun, it will fall to a lower orbit. You can keep the highest point in the asteroid's orbit on Earth's orbit, but the rest of the orbit will fall below Earth's. This makes it more difficult to time it right so that the Earth and asteroid end up in the same place at the same time. Worse yet, if you do manage it, the asteroid and the Earth will be traveling around the sun at much different speeds even before the Earth's gravity really kicks in. The closest approach will be, at minimum, 11km/s. This is because, relative to the Earth, the asteroid is on a hyperbolic trajectory. All hyperbolic trajectories are at or above escape velocity (~11km/s for Earth) at their lowest point. So take L.Dutch's number of needed Saturn 5's and multiply it by 1.5 or so.

Second, you have to deal with the structural integrity of the asteroid. Many asteroids are not single solid rocks; they're big clumps of gravel barely held together by their own gravity. The hundreds of Saturn 5's L.Dutch suggests will shake it apart. And even if you use gentler engines, Earth's gravity will pull it apart with tidal forces. So even ignoring the economics and logistics of actually getting powerful enough rockets to do this, for many asteroids it won't even be possible.

I have been wondering if eddy currents induced in a conductive meteorite might convert some of the object's kinetic energy into heat. I found speculation about asteroid-stopping tech but this is the only article I could find dealing with the question. 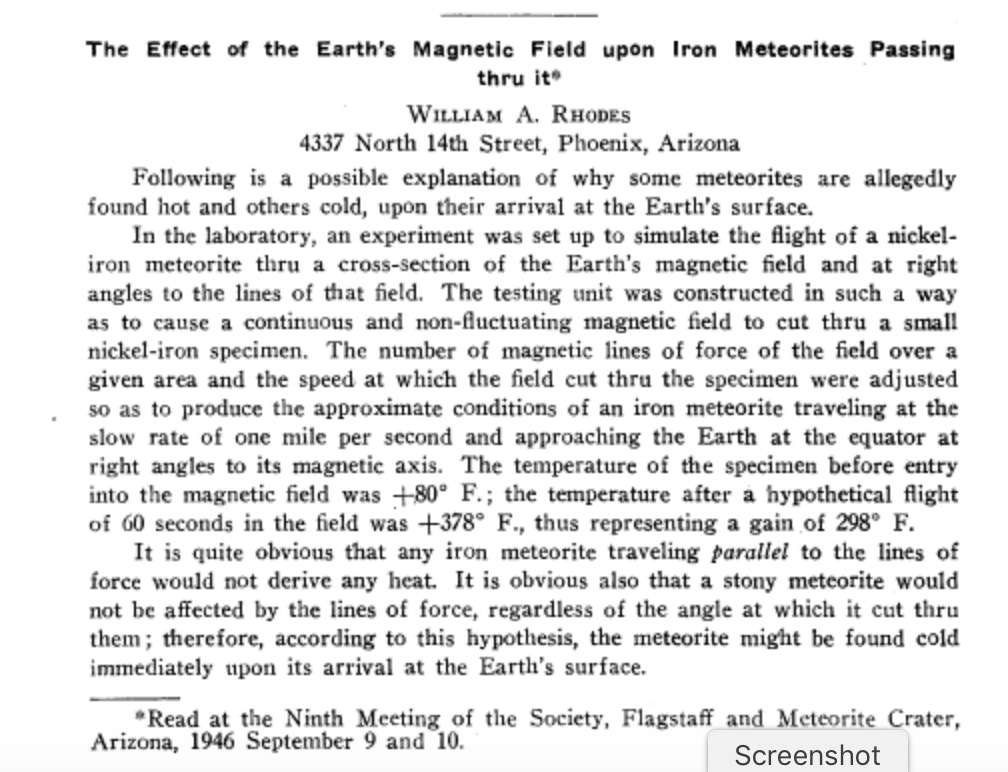 It makes sense that a conductive object would slow as it traversed a magnetic field. The faster the object, the more it will slow. Eddy currents are affected by the shape of the object they are within, and so maybe this is less of an issue of satellites at orbital speed?

A nice thing about slowing with the earths magnetic field as opposed to aerobraking is your will not lose meteorite mass to abrasive air. A bad thing is that it might take several passes through the field to slow it down.

One could augment the magnetic braking effect by imparting an electrical charge to the asteroid. Maybe this could even be done chemically with your rocket tech. A charged object will also be affected by a magnetic field, regardless of its conductivity.

Prediction: if it is true that a (planetary) magnetic field can slow a (passing) conductive object one might expect to see deviations in the course of metallic asteroids passing the earth but not in those passing Mars which is without magnetic field.

No answers yet but a comment with this very cool concept - electrodynamic tethers.

Electrodynamic tethers (EDTs) are long conducting wires, such as one deployed from a tether satellite, which can operate on electromagnetic principles as generators, by converting their kinetic energy to electrical energy, or as motors, converting electrical energy to kinetic energy.1 Electric potential is generated across a conductive tether by its motion through a planet's magnetic field.

This is perfect for steering an incoming asteroid. One could have several of these, some dedicated to braking and some to thrust akin to maneuvering jets. You use the kinetic energy of the moving body to steer it and convert that energy to heat for braking it. No moving parts. The reactionless drive!

Does a space elevator count for suitably near-future technology? No need for rockets, and having all that mass coming down to earth could drive an interesting generator for free leccy. Assuming you can find enough unobtainium to build the thing in the first place.

As for landing, does it have to be a soft landing on the ground in one big piece? If you're going to send a lot of rockets up to get the thing, could you not top each one in a cheap shuttle/X37B type vehicle to bring it down in chunks? If you could have some control over the landing maybe over a shallow sea you wouldn't need anything too sophisticated or even reuseable, just suck the debris off the seabed.

I'm not sure if the Inmarsat, Virgin and friends would appreciate you breaking up rocks in orbit given the risk of bits breaking off unexpectedly and knocking holes in satellites and tourists though.

For certain definitions of "landing" I think it might just barely be possible.

Aerobraking isn't going to do much to anything big enough to be worth playing with.

Structural integrity is going to be a big deal. If your asteroid comes apart you get Tunguska or Chelyabinsk. It better be pretty solid.

I would put the asteroid in a polar orbit as low as possible (exactly how low this is depends on your rocket technology.) The last burn lowers the periapsis (counting aerobraking effects) to a trajectory that just touches down in Antarctica as soon as it is far enough inland to not kill penguins. It's energy is expended tearing up the ice.

Not the answer you're looking for? Browse other questions tagged science-based space near-future asteroids astrophysics or ask your own question.

18
What would an asteroid base look like and how would it operate?
3
How to explain Earth-like gravity in small asteroids?
1
How to stop an asteroid from hitting Earth without nukes?
5
How could someone ground a breathable synthetic atmosphere onto a small asteroid?
8
Can a 15km, rapidly-spining asteroid go undiscovered until the asteroid belt is being actively explored?
5
What's the biggest, most spectacular asteroid collision the moon could save us from?
4
Asteroid in the asteroid belt suddenly gains the gravity of the earth
7
Asteroid mining: Good for the environment?
12
Could a planet's tidal forces break an asteroid passing very close to it?