I'm designing the type of ships an amphibious race could use for long distance travel, like a floating house, following oceanic currents. I imagine it shaped like an iceberg, with more structure below the water than above.

Essentially a big ship made of sculpted pumice. But I saw in various places that it cannot be done.

Why? What could make a ship made of pumice seaworthy?

But I saw in various places that it cannot be done.

There are two main issues for carving a boat out of pumice:

Pumice is composed of highly microvesicular glass pyroclastic with very thin, translucent bubble walls of extrusive igneous rock...It forms when volcanic gases exsolving from viscous magma form bubbles that remain within the viscous magma as it cools to glass...Pumice has an average porosity of 90%, and initially floats on water.

...When larger amounts of gas are present, the result is a finer-grained variety of pumice known as pumicite. Pumice is considered a glass because it has no crystal structure. Pumice varies in density according to the thickness of the solid material between the bubbles; many samples float in water.

After the explosion of Krakatoa, rafts of pumice drifted through the Indian Ocean for up to 20 years, with tree trunks floating among them. In fact, pumice rafts disperse and support several marine species. In 1979, 1984 and 2006, underwater volcanic eruptions near Tonga created large pumice rafts, some as large as 30 kilometers (19 mi) that floated hundreds of kilometres to Fiji. (ref)

It seems you can make rafts of pumice. 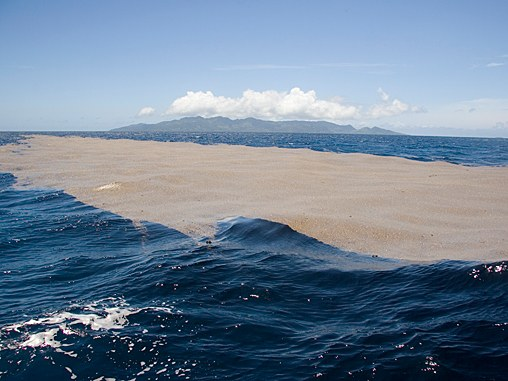 Featherock pumice is made of volcanic glass. It has been sitting at the original site of its eruption for thousands of years. It will not deteriorate over time outside...Pumice is a very soft rock that will carve very easily with regular metal tools. (ref)

You can also sculpt pumice easily and it won't fall part when exposed to the elements.

There’s nothing new about pumice concrete. The Romans were using it 2000 years ago. Roman engineers and builders have been celebrated for their enduring wonders—especially for the most well-preserved of all Roman architecture, the Pantheon of Rome. The dome itself is a world-class wonder. It was expertly cast using a concrete consisting of hydrated lime cement, fine-grained pumice pozzolan (critical!) and lightweight pumice aggregate.

Modern scientists have determined that the manageable weight of the Pantheon’s huge, unreinforced concrete dome is attributed to lightweight pumice aggregate, while the secret to Pantheon’s (and other Roman structures) longevity is pozzolan: fine-grained pumice (known as pozzolana to the Romans). (ref)

Pumice is also fairly durable, at least when mixed with some other materials.

But can you make a boat out of pumice?

Well, you can make a small boat out of concrete.

You can even make large boats out of concrete.

So, sure, it sounds like a pumice boat would float.

You might want certain parts to be poured concrete made in part from pumice stone, rather than just carved pumice. Not only will be be easier to get the shapes you want, but it will hold different pieces of pumice together and it will make a smoother surface, something your amphibians will appreciate.

Perhaps take the idea from Christopher's answer and use the pumice as a component in concrete. A trick people use to make concrete canoes is to use hollow glass micro-beads as one of the components. So in your world perhaps you can crunch up your pumice into very small pieces, coat the little pieces with with a resin, or use some sort of surfactant to keep the density light while the mixture hardens and then end up with a very light concrete to make your boat. That would be a little different than the Roman concrete that used volcanic materials, and probably lighter.

Pumice doesn't exist in large boat-sized chunks that you can carve into a boat. It's made of smaller pieces of unreliable composition. You need a resin, or a binder like used for concrete, to stick it all together. Then you build a mold to shape the thing, fill the mold, and let it set. You could instead try making planks out of the bound pumice, but that would result in a weaker boat.

Also, pumice is swiss-cheesed with holes. Water must be kept out, which is accomplished by the resin. Careful - fill too much of the internal pores with heavier-than-water resin and abruptly you have something which doesn't float anymore.

At this point, you're using a tremendous volume of not-very-strong material as the outer walls of your boat. Pumice is fragile, and anyone could step a foot through or drop a hammer through it.

The fundamental problem with the idea of a pumice boat is that the floating ability of the raw material is not as important as the airspace in the middle of the boat.

Not the answer you're looking for? Browse other questions tagged geology science-in-society ships shipbuilding or ask your own question.

12
Floating island made of concrete, part 1: can it be made of roman concrete?
3
How would giant mermaids wage raids/warfare against ships?

23
Ship design that could navigate on the edge of an incredibly strong vortex
2
What do you do about a ship adrift?
61
What would it take to build a ship capable of crossing the Pacific?
6
Could a warship's armor be made of aluminium?
19
Is possible to make an "almost-perfectly" sealed ship?
25
What could limit geographically a resource such as an ore to a specific spot on a planet?
12
How could an outrigger or catamaran ship be modified for age of sail naval combat?
7
Advantages/Disadvantages of a ship made of a single piece of wood
6
Cannonless ship of the line - could I have ship of line with magic catapults/balistae?
3
Sailing Ship Needs to Make a Fast Getaway