Would a portal to space enable propulsionless orbital launch

I'm writing a story about a race that has space travel capabilities without rocket technology, instead is using a portal to space and was wondering whether it's possible for them to put something in orbit, and more precisely:

Is it possible to launch an object into portal A inside a vacuum tube so that when it exits the portal at the point B it would enter earth orbit?

I can't get my head around the math required to compute such an outcome, and was wondering whether you can use Earths gravity to faciliate such a launch.

They use manuevering thrusters and they do have fireworks, but their rocket technology is nowhere near as sophisticated as ours. They rely on ballistics to get the job done. 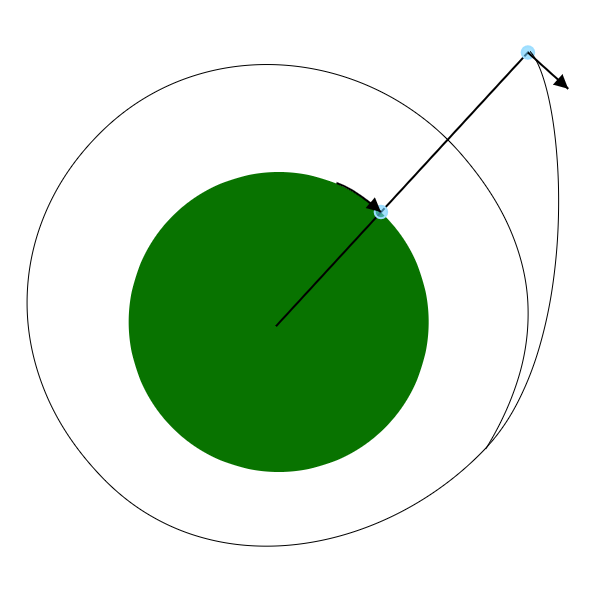 @JBH: Portal doesn't transfer gravitational forces, only matter and EM radiation (thanks for the heads up on the issue)

And yes, the idea is to make the portal further than the desired orbit and use the "falling to earth" with small manuevering thrusters to "get up to speed". I plan on using the vacuum tunnel to accelerate the rocket on the ground to reduce the fuel requirements even further, because something like even 100m/s is a whole lot of energy I don't need to bring onboard.

As per restrictions, portals are perpendicular to the surface of the sphere at the point of intersection with the ground. Thus no "falling rocketry".

@MarkOlson: The potential energy is technobabbly created from unobtainium radiation. Not something I care about, because there's a lot of ways it could work (energy used to send the matter could include that delta in potential energy) amd have not settled on the way it's done. Thanks for the heads up on this issue.

AtmospheriPrisonEscape's answer in this thread gives us the equations needed to calculate velocity at any particular orbital height:

Any small mass $m$ orbiting a large mass $M$ has its centrifugal force balancing gravitational acceleration exactly, so that

$$g = \frac{v^2}{r} $$ and the gravitational acceleration $g$ is the result of the planetary mass $M$, gravitational constant $G$ and distance $r$ via

so that any velocity that fulfills the force equality is $v^2=\frac{GM}{r}$, also called Keplerian or orbital velocity.

Edit upon clearer understanding of the question:

What you'd need to do is calculate the orbital velocity at the height of the portal, subtract 460m/s (the surface velocity of rotation) and accelerate your payload till it reaches that speed before entering the portal (ie for geostationary velocity: 3.08km/s - 460M/s = 2.62 km/s). Now 2.62 km/s is freaky fast to do inside the atmosphere - our current airspeed record (in a jet) is 0.97km/s in a Lockheed SR-71 Blackbird, Ok, the space shuttle's effected re-entry much faster than this but where the atmosphere is thin.

If you're looking to accelerate the payload into a stable orbit (other than at an orbital radius greater than the moon's) You're going to need to calculate the disparity between your achieved orbital velocity at whatever velocity the payload enters the portal and the needed velocity and using F=mA in newtons, gramms and metres per second - to calculate the thrust your "firework" will need to make-up the difference. - This whilst calculating for the firework itself shedding mass as it burns.

The disparity in gravitational potential energy could perhaps be explained in term of the energy the wormhole requires to run (which would be loads) - but beware, if an object enters the orbital wormhole and exits the Earthside one you'd need to dissipate the energy somehow.

Most people who use portals ignore gravity, etc.

If you have a Saturn V rocket standing on its pad and open a portal right above it...

BUT! what if you take everything I just said and designed both your rocket and your story to deal with the issues. Perhaps nobody's done that before, and it would be mega-cool. The effects of gravity may mandate a minimum distance from Earth for the portal exit, meaning rockets must swim back to Earth's orbit (NOTE: You either understand this or have an innate concept of it because your diagram shows this)... Maybe you take advantage of the pressure change to lower fuel, making your rocket lighter... etc!

Suddenly it makes sense to "launch" rockets upside down.

Yes, but there is still no free lunch

Assuming your portal is a relativity-compliant wormhole, with one end sitting on the ground and another in orbit, it would absolutely work. You cross the ground portal at walking pace, and you emerge in orbit, drifting away from the space portal at walking pace. The portal itself is pushed in the other direction, but as it is probably much, much more massive than you, it shouldn't make much of a difference. Still, keep that in mind for orbital corrections.

However, things are never that simple.

Both ends of the wormhole are created at the same place, so you have to launch the space end the hard way. This means that unless you have already lots of stuff up there (say, a conveniently redirected asteroid), you will still have to launch the same mass in orbit, but in one go. You could use another wormhole exit already up there, but it won't help you per se, as the older portal will still loose mass equivalent to the new portal.

Also, time is passing differently for both ends, as the sky one is in orbit going faster but higher in the gravity well. As we know from atomic clocks on satellites vs on the ground, there is some drift. This means that your wormhole becomes a time machine: if there has been one second in time difference between both, crossing it will take you one second in the future or in the past.

As long as both ends are far enough, that's not a problem: even light cannot make it back fast enough to arrive before it crossed the portal. In fact, if you want to use it to go to other stars, that's a serious upside! You send it on a hyperrelativistic rocket and time compression will make the Earth-decades-long travel time into a few subjective weeks. So you can start exploring the new star system only a few weeks after launch! Sure, it is decades in the future, but you don't care as it is even further away in light-years.

Problems start once time-drifted ends move closer than that.

You may create paradoxes, but it is suspected by many that this won't actually work: if a photon can make it back to its starting point, it could theoretically follow the same path again at the same time - infinite recursion! And assuming the Universe doesn't CTD with a stack overflow (after all, it hasn't until now and at least some idiot alien has to have tried at some point), then quantum fluctuations will probably crash the wormhole instead.

What happens when a wormhole crashes? Both ends turn into black holes of their respective masses. Those are probably small enough to not start eating stuff (after all, you were using them, and a too heavy one wouldn't have been practical to keep one at the surface of the planet. But light black holes pose another risk: Hawking radiation. So your black hole will turn their entire mass into energy in short order - hours, seconds or even less. The last second will look like a giant nuclear test. Probably a subterranean one, as at this point it has probably destroyed whatever kept it from falling and it is too small to care about normal matter.

The bad news is, you don't want to do loops. You could, if you are very careful, but it's probably not worth it. Better have a star network, with you at the centre of the star, getting obscenely rich by controlling the flux of everything between the branches!

The good news is, if someone else is starting their own branch, you can reinforce your own network and throw a wormhole end their way, to create a closed timelike loop. If everything goes as planned, a wormhole somewhere in their branch will crash and you just stole half their network! Locals may be unhappy about being suddenly forty years in the future, but that's what riot control drones are for.

Dr Luke Campbell, in his hard-SF Vergeworlds setting (which I -shamelessly ripped off- was inspired by for this answer) dubbed this "causality attack". If you want to look at what wormhole use would look like, definitely check it out.

Consider turning your portal into a Virtual Space Elevator

So, why not place the end of the portal in Geosynchronous orbit and so your launch window becomes 24h? Unfortunately, based on Fay Suggers' answer and comments, you don't get the "Free momentum" that you earn from a real space elevator as the payload is lifted and brought back to earth. To compensate you will need an evacuated launch tube/vac-train similar to those used in a StarTram but without the floating megastructure. (The train will still be several dozen or hundreds of miles long, in a straight line, to maintain survivable G-forces! Small, circular tracks are not survivable!) Gravity Assists against earth may also help gain some extra speed.

To return back to the surface safetly, the tried-and-true method of Atmospheric re-entry will be needed. (Again, this is based on Fay Suggers' answer and comments.)

Not the answer you're looking for? Browse other questions tagged spaceships orbital-mechanics teleportation .

7
Space exploration without electronic devices, is it possible?
6
Energy costs of giving Mars and Venus moons: moving gas giant moons vs. capturing a rogue planet?
6
Super earth habitability
8
Wings for orbital transfer bioships? - The ascent
6
Ecological implications of osmotic portals
3
Launching a spaceship with a portal-based engine?
3
Earth-sized Moon with Host Planet launched from Star System
8
What is the most plausible way to lower cost to orbit?