Why would a male marsiupial agree to accept responsibility for carrying half of his mate's joeys?

I'm looking to create a species of marsupial that is heavily K select, which is to say they put significant effort into raising their young after birth (both of them :P ) in which both the male and female carry joeys.

My general idea is that the female would get pregnant with more children then she could raise personally. Then after they develop to joey phase half the joey would move into the female pouch, as with most marsupials, but half would instead be transferred to the male's pouch. The male would also produce milk and both sexes would carry their joeys to term.

Notice I'm suggesting the male carry only half the joeys, the female would still carry half. This way the two sexes are equally sharing energy cost of pregnancy (or near equally, the cost of producing eggs is minimal in comparison), rather then trying to move all the cost over to the male. If the male is unavailable or refuses to accept his 'half' of joeys presumably the female will abort/abandon the joey(s) the male would have received rather than attempting to carry all of them; since she knows she is unable to care for that many, and may not even have pouch space or sufficient nipples to do so. thus the male doesn't benefit from trying to force the female to carry his half of the joeys.

The idea would be to allow production of more joeys at one time. The evolutionary advantage for the female seems obvious in this situation. However, I'm struggling with justifying why the male would accept the responsibility of a 'pregnancy'. While his carrying half the joeys would allow production of more joeys from the single mating it seems potentially insufficient advantage compared to the opportunity cost for the male of not focusing on trying to impregnate multiple females.

For the male, there are a number of potential disadvantages to this system.

I'm looking for methods that can be used to make this an evolutionary adventurous option for the male. I'm looking for hard science and detailed analysis of how such a system could evolve if possible.

I'm willing to accept a system where males only agree to accept responsibility for carrying joeys under certain circumstances, such as young males offering to share carrying responsibility in order to earn mating rights while more dominate males focusing on mating multiple females. However, such a possibility would half to address how the female is able to ensure a male actually intends to carry when they mate, to avoid males 'lying' about willingness to help carry to secure more matings.

Inspired by my answer/comments on this question

Is a species with high paternal parental investment feasible?

High paternal parental investment actually exists in many species. The term used for this kind of species is "pair bonding species", as opposed to "tournament species", but don't be mislead by the terminology - there is a cluster of behavior features found together in each of those two types of species, and making a pair bond is only one of the features in that cluster. In pair bonding species, the dads deliver a lot of care for the offspring. Here is a description of these features: 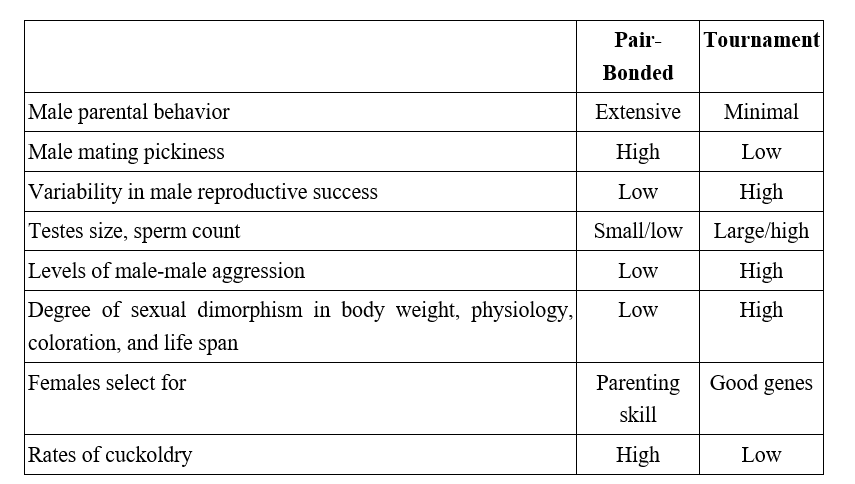 Sapolsky, Robert M. Behave: The biology of humans at our best and worst. Penguin, 2017.

It is unclear how these two opposing strategies get started within a species (and they are also just two ends of the spectrum - there are lots of intermediate cases, including us humans). But once you have a species where this is the case, it is a stable state - there is evolutionary pressure for the species to remain as it is, including the dad investment. For example:

Notice that these features are highly correlated - you don't generally get species where you get, say, low male on male aggression, but the fathers flunk on care for the offspring. So, to reap the benefits of being a pair bonding species, the dads have to invest significant resources in parental care.

Of course, the individual animal does not make such calculations for the good of the species - the behavior of the male animals happens because of a combination of physiological signals and social learning. It is highly unlikely that parental desertion will occur, and the few such accidents won't change the overall parenting strategy in the species.

To address the specific disadvantages you mention:

Also consider that even in the most typical tournament species, some parental investment is preferable:

even in a highly polygynous mammal, males may have to balance paternal effort with mating effort

All in all, the direction of your arguments is correct, but it is nowhere close to precluding the scenario from happening.

Is it feasible that the male parental investment is expressed as carrying half the litter in the pouch?

Possibly yes. I don't know of any species where this has evolved exactly this way, but there are several known cases of males incubating fetuses in some way. You have not only the penguins mentioned in the comments to the question, but also seahorses and frogs, as well as several other species.

Your choice of marsupials is already quite good:

In mammals, the occurence of biparental care is correlated with the production of poorly developed young while uniparental care tends to occur in species that produce well developed and large-sized young.

Two features of your suggestion which are not seen in nature (as far as I know) are marsupials where the joey lives in the male pouch, and splitting the litter.

The biggest disadvantage to living in dad's pouch: young kangaroo joeys practically hang onto a nipple their first days in the pouch. Male lactation is theoretically possible, but it has never evolved, and there are probably reasons for it

Physiological barriers to the evolution of male lactation do not seem individually insurmountable. However, the rarity of even partial or pathological male lactation indicates that they are formidable. Although experimental manipulations of both mature and immature males can produce lactation, and although there is evidence of heritable variability in the sensitivity of male mammary tissue to the induction of further development, there is no indication that male lactation might ever occur spontaneously in natural mammalian populations.

But in the same paper, the question is asked

Is the reproductive capacity of a monogamous pair limited by the female’s lactational capacity?

and the author hints that the answer is "no", so that would be a reason why male lactation never evolved. In fact, Lombardi mentions that "in biparental species, the female usually represents the limiting resource" - so if you introduce paternal offspring care as a strategy to increase a pair's reproductive capacity, because the female can replete her resources sooner (similarly to the penguin case), the question becomes why only offload half of the offspring on the father, when she could offload all of it. One argument I can think of is that, if one parent is caught and eaten, half its litter still survives, so it makes sense to not put all one's joeys in one pouch.

You might have a good argument for the separation if you set up an "exchange programm" as a kind of compromise. If the female carries all the babies in her pouch, her body is strongly taxed. If you give all babies to the dad and don't have him lactate, they starve. But if you have them exchange pouches twice per day, the mother only has to carry around half the weight, and does not risk all her children being eaten together with her, while they still nurse from her only, so you don't have to rewire the male's endocrine system for lactation. One problem here is the high risk of pouch exchanges - apparently birth is highly traumatic for marsupial joeys, since they are at a very early development stage and the movement into the pouch is very difficult for them, and some don't make it. I remember a moving description of it I read in some popular science book, either in Attenborough or Grzhimek, but don't have the original texts here to cite, but I found a nice illustrated explanation on the web, https://www.thedodo.com/why-kangaroos-have-pouches-1218814506.html. A look at the eighth picture is enough to see why it can't jump back and forth between pouches! So it would be more realistic to have the female carry them in the first days, but have them start changing into dad's pouch at some point, and that can be earlier than the typical "first journey out" for a kangaroo.

You should also consider that hardwiring teaching behavior for a more developed offspring in both sexes can be a bit "wasteful". For example, a mama leopard teaches her young to hunt, but a dad leopard doesn't. If your dad marsupial carries around half the babies, the time will come where they alternate between the pouch and the outside world, and start learning. It would be logical for the dad to teach a different set of behaviors than the mom does, which again argues for baby exchange.

Your argumentation would be somewhat tenuous, but I would say you can pull it off if you are careful.

If you need more information than provided in this already long answer, I would suggest reading Royle, Nick J., Per T. Smiseth, and Mathias Kölliker, eds. The evolution of parental care. Oxford University Press, 2012.

Not the answer you're looking for? Browse other questions tagged creature-design evolution hard-science .

12
Is there a reason for a humanoid species to be 'biologically' matriarchal with females being slightly more dominant than the males?

18
How would gender roles be affected by a society where parents could control the sex of their child
10
Is it illogical to have a species that goes through two metamorphoses and ends as an asexual being?
8
Methods to ensure gene flow in species with seperate sapient and non-sapient lifecycle
10
How to justify evolution of a sapient hermaphrodite species
6
Plausibility of seahorse-like marsupials where the male carries offspring?
7
Will this creature's reproductive strategy work?
7
Why would males exist in species with hermaphrodites?
5
Is there a reason that females passing on more than 1/2 of their genetics to the child would be unlikely to evolve?
11
Evolution of sexual parasitism in a species with small and intelligent females but large and "brute" males?