If the Earth was part of an ultimate solar system, what would the sky look like?

I once show a picture depicticting the idea of an ultimate solar system: 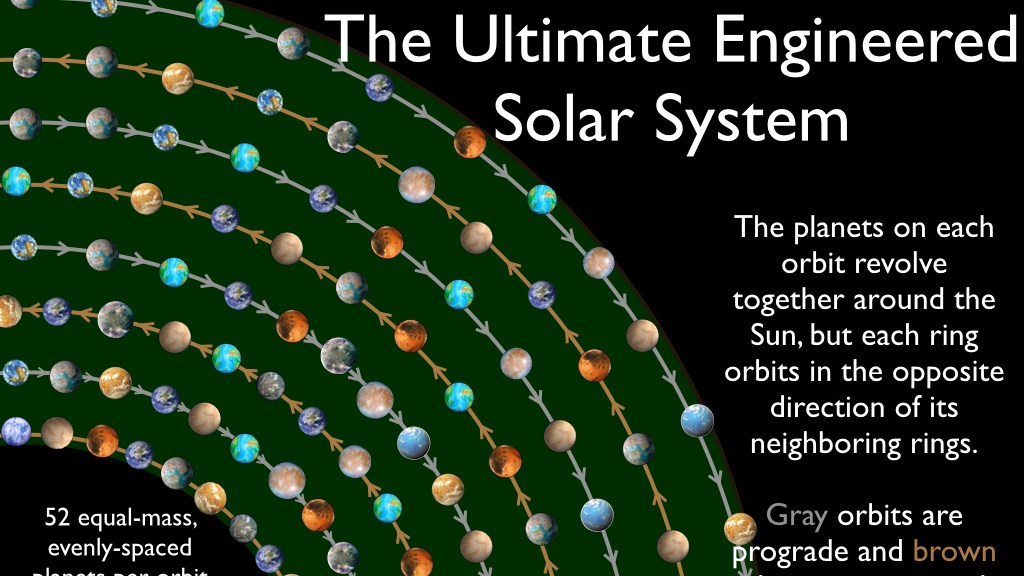 In this solar system there are 8 planetary orbits, each containing 52 equal-mass, evenly-spaced planets all in the habitable zone.

Now, imagine that in the far far future, humanity has the energy and resources to engineer such a solar system. If we succeded, (assuming that this solar system really is stable and there won't be any catastrophic collisions between the earth and any other planet) how would the sky be different. What I mean is, would the planets that are at the same orbit as Earth or beyond the earth's orbit be visible during the night or the day? And what about the planets that are in front of the Earths orbit, would they be visible during the day? Could they cause minor eclipses when passing in front of the Earth or they wouldn't be visible at all to our eyes.

Also another question about this solar system is, would the Earth be capable of holding it's moon? Would the neighboring planets be too close to the moon when it rotates around the earth, or would there be enough space for the moon's orbit around the earth be unaffected?

Edit:If the planets beyond Earth were visible by night how would they look like to the human eye? Assuming that the Earth was located at the fifth orbit (I'm not exactly sure which of these orbits represents the Earth's orbit, please correct me if it is) how visible would the planets be? Would they seem, like stars like venus or mars, or would they look like smaller versions of the moon?

According to AlexP Venus is visible during the day so This changes my answer about day visibility to yes. Sorry for the mistake.

According to Wikipedia the most common estimate for the habitable zone is from 0.95 to 1.37 AU (Astronomical Units: average distance between Earth and sun) so we have $6.283 \cdot 10^{10}m$ of room to fit 8 Earths into. This means in most cases the planets will be way closer than even Venus (which is the third most bright object after sun and moon)

So the answer is easily YES (every Planet that is in line of sight).

For this we assume the moon is about 1 cm big for the naked human eye. (If you haven't noticed the moon is visible during the day)

To get the distance to Planets are apart from each other (at least) we simply divide our habitable zone length by 8 for each orbit circle. Which we get 7 853 888 175meters for. Multiplied by our shrinking factor we get a size reduction to the eye of $7.068 \cdot 10^{10}$ which for a planet the size of the earth means it would be around the size of a dust particle. YES

What about planets in the same orbit?

The orbit length can be calculated by this Formula: $Ol = 2\pi \cdot r$ Ol = Orbit length. With this we get a length of $8.9295 \cdot 10^{11}m$ when we divide this by 52 we get the distance between two planets in the same orbit with: $1.717 \cdot 10^{10}m$ which is far grater than the distance between two planets in different orbits but still closer than Venus most of the time so YES

Due to their small size there wouldn't be any noticeable effect. So NO

Could earth keep its moon?

Due to the Planets on other orbits constantly the moons orbit wouldn't be as predictable as it is in our solar system and its orbit would resemble more that of Hyperion than that of our current moon. Basically it would wiggle in its orbit. So the answer is YES

Not the answer you're looking for? Browse other questions tagged planets earth solar-system day-night .

20
How would the sudden destruction of Earth affect other planets within the Solar System?
23
Realistic sky of an Earth-like moon orbiting a gas giant (length of day and size of celestial bodies)
9
Could I have an earth-like planet from which sun and moon would never be simultaneously visible?
4
Describing a planet on a comet like orbit
0
Would Sean Raymond's "Ultimate Solar System" Work in This Particular System?
14
Could We See a Lagrange Giant in the Sky?
3
Is this habitable moon formation scenario plausible?
1
Would 6 Earths Separated by 60 Degrees Have Day-Night Cycles?