What kinds of minerals or compounds could radiate heat?

I'm working on an RPG in a world with some magical elements, like a type of energy (so far unnamed) inherent in animals and humans. Those with high amounts of this life energy in them are thought of as "pure", while those with low amounts are thought of as "corrupt". It has many properties similar to thermal energy (such as methods of transfer and shiny metals being able to reflect it). I took a lot of inspiration from physics lessons on thermodynamics.

There's also a mineral/ore in this world that is valuable because it is able to emit the previously explained life energy via radiation (whether at all times or only in certain conditions, I haven't decided yet, but it is able to do so at room temperature). Societies mine it and use it for protection because its pure energy repels the corrupt.

What already existing mineral could serve this purpose? If none, what elemental composition would allow this fantasy mineral to radiate thermal-like energy?

EDIT: I should've been more clear. I want some kind of mineral, whether real or made-up, that would reasonably be able to radiate the magical "life energy" that shares some properties with heat. If I end up adapting an already existing mineral to fit my RPG's lore or creating a new kind of mineral, either way works, but if I create a new one I'd like to have an idea of what compounds or elements would be necessary to make it serve "this purpose", i.e. be used by the people of my world for protection with what they would call its "aura of purity". I hope that clears things up.

There is no single hand-sized naturally occurring material that can continuously emit heat over long periods of time. If there was such a material, we would already be using it for power generation, wouldn't we? There are some possibilities, but none are ideal. However, you may be able to twist some of them into your story.

You have four options:

Ok so here's an idea, which would be an elaboration of point 1. A naturally occurring nuclear reactor forms a concentration of fission products. This essentially heat-producing nuclear waste, and it can be mined (as requested in your question).

But, it's radioactive. One way to shield people from the radiation, but allow the heat to come out of it, is by enclosing it in lead glass. This glass would block most of the radiation, with the added benefit of being very pretty. 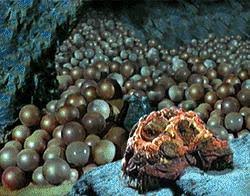 Your energy is life energy. It stands to reason that something with a lot of it is alive. It might not be alive in the way we think of life. It might actually be more alive than that.

Depicted - the Horta and its eggs, from the Star Trek episode The Devil in the Dark. The Horta is a silicon life form living deep in tunnels. The valuable and useful "crystals" found by human colonists turned out to be its eggs. The Horta protected its eggs.

So too your "ore". The deep world is vast - much larger than our two dimensional surface shell. This subterranean realm is full of living things, sparking with life energy. These things are very different from the surface life we are familiar with. The ore are tendrils, or twigs, or spores, or possibly even eggs from creatures that live deeper down. Taken from their habitat, they slowly die as their energy radiates away with no prospect of replenishment from the earth.

For the surface life, these crystals are useful and beautiful. Those that use them might realize they slowly wane and go out, but might not realize they are dying. Some specimens of this "ore" might be able to try to escape, or find other sources of life energy. Some might have a Horta equivalent - a parent or patron interested in saving them or preventing future abductions.

I'm going to assume by 'thermal-like' you mean actually thermal energy, and you'll just claim the heat as a side-effect of this new energy type.

The only cases that can 'constantly' emit heat are minerals with high radioactive contents. Those are dangerous of course, but if you can find some way to make them plentiful and say that the native life in this world has evolved natural radiation resistance far better than our own, it might work. Plain mineral forms tend to not emit much heat, but pure forms of some radioactive metals emit so much heat that they glow red-hot (and some simultaneously fluoresce from their own radiation).

Other options that work on much shorter time-scales:

Of course, you could also just pick a real-world mineral that already meets your other criteria, and just attribute this new effect to it as well. Gemstones may work well for this, because they can then also be processed by your people into nice looking decorations (and that may improve or reduce their ability to emit this life energy), and true gem-quality samples are rare for most of the 'classic' gemstones.

Prasiolite might make an interesting choice if you go with this approach, it has rather beautiful pale green crystals, it's rather durable (it's a particular variety of quartz), it's pretty rare in nature in real life (but your geology could be just different enough that it's more common), and less scrupulous people can produce synthetic prasiolite by heat-treating amethyst. You could have a whole aspect to it where natural samples are far better at producing life energy, so they are significantly more valued, and some countries might have laws against producing and/or selling synthetic specimens.

Not the answer you're looking for? Browse other questions tagged science-based magic geology materials natural-resources or ask your own question.

10
What does a Dracula-esque villain need to maintain a magical castle and a variety of minions?
8
Would introducing magical birth control into this society early in its history lead to a rigid, controlled society?
6
Using a black hole/antimatter as a weapon in a fantasy story
2
What environmental conditions would create compounds not found on earth?
6
How to allow a cylindrical habitat (O'Neill or McKendree) to radiate heat to space?
18
What kind of materials could be made with immense heat, that weren't available in a typical Medieval setting?
6
How can a troglodytic society democratize braille literature?