What is the Habitable Zone of a Red Dwarf star?

This question is pretty straightforward:

There is no consensus now if such a thing as a habitable zone really truly exists around red dwarfs.

Most red dwarfs flare, doubling their luminosity in a matter of minutes. This shifts the zone with optimal temperature very much, very fast, and the planet may be in it, and literally five minutes later be outside of it.

Flares also tend do throw a lot of charged particles and do funny things with magnetic fields. If any planet around a red dwarf is able to keep an atmosphere is still an open debate.

Red dwarfs are cold. This means that "habitable zone" would make planets orbit their stars so close they would get tidally locked. A tidally locked planet would have its star-facing side above the temperatures needed for life as we know it, and its space-facing side much colder. This would create strong winds, except your planet does not have an atmosphere due to flares anyway.

There are other minor issues, but these two points are the biggest, and easiest to explain reasons why talking about habitable zones around red dwarfs in general is moot. It is only reasonably possible to talk about habitability of a specific planet orbiting a specific, probably exceptional, non-flaring red dwarf.

Searching for circumstellar habitable zone lands you on this wiki page

In astronomy and astrobiology, the circumstellar habitable zone (CHZ), or simply the habitable zone, is the range of orbits around a star within which a planetary surface can support liquid water given sufficient atmospheric pressure. The bounds of the CHZ are based on Earth's position in the Solar System and the amount of radiant energy it receives from the Sun. Due to the importance of liquid water to Earth's biosphere, the nature of the CHZ and the objects within it may be instrumental in determining the scope and distribution of Earth-like extraterrestrial life and intelligence.

The habitable zone is also called the Goldilocks zone, a metaphor of the children's fairy tale of "Goldilocks and the Three Bears", in which a little girl chooses from sets of three items, ignoring the ones that are too extreme (large or small, hot or cold, etc.), and settling on the one in the middle, which is "just right". 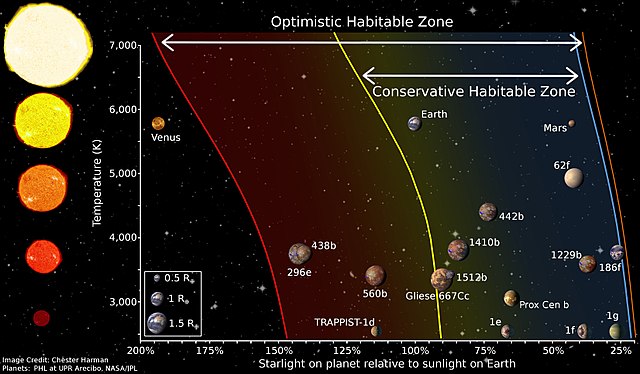 The distance in astronomic units from a star with luminosity $L$ at which a planet could host life can be estimated according to the following relation:

Obviously the distance alone is not sufficient to have life.

Flattening out all sudden magnetic and luminous flux variations (assuming the author has a way of achieving this by Sci-Fi means or just "Atypical Stability of the System"):

Not the answer you're looking for? Browse other questions tagged science-based planets stars habitability or ask your own question.

5
What would be the most likely colour of leaves on plants on a planet orbiting a red dwarf?
8
Red giant Habitable zone
21
Close the door on your way out - Life lit by a blue dwarf star
1
Circumstellar Habitable Zone of an Orange Dwarf
8
What is the habitable zone around my star?
2
Brown Dwarf effects on a habitable exoplanet orbiting the same star
6
Planet Orbiting a Red Dwarf
7
Visibility of a Red Dwarf Companion Star