Cities in the trees

I'd like to tip my hat to this week's fortnightly challenge with this question.

In a world I'm currently developing, I have a region that is dominated by trees that have developed a unique adaptation that allows their bark to absorb moisture and nutrients directly, rather than having to pump it all up from the roots, and so can grow to arbitrary size. The canopy of this massive forest is the breeding ground for a particularly contagious and deadly disease. The ground is the domain of massive predatory beasts. People spend their entire lives in these trees, never seeing either the sky or the ground.

Keep in mind the following:

I would expect to see interconnecting bridges. Like on Endor or in the Lord of the Rings. I would expect to be actually relatively few branches because branches need light to live and grow. This is how big forests look 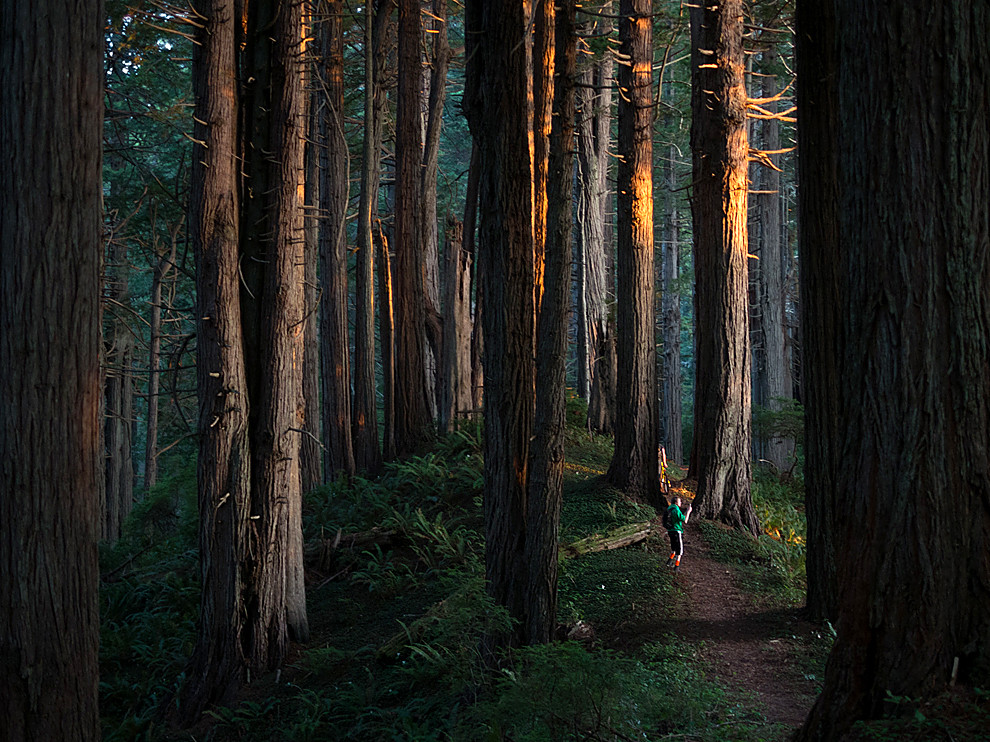 Lots of dead branches much below the canopy.

Next, I would think that most dwellings would actually be INSIDE the large trees. Care would need to be taken not to hollow out so much that it weakens the tree, but trees are only living on the 'outside' so starting at a dead branch and hollowing into the center is a reasonable idea. You'd want to have some basic physics (or generations of trial and error) to understand where building and hollowing out the tree is safest (or how to brace the inside to maximize the strength of the tree so it won't snap at your home.)

I would also expect most homes to have a 'cistern' in the tree to hold water for daily needs. Trees like the Redwoods have relatively 'soft' wood and bone tools could be used to hollow out the tree, especially if one starts with a rotting branch to get a head start.

Type II trees, have branches that don't require much sunlight.

These forests are going to be so think that it will be like living in a brush pile. Tunnels will have to be cut through and in more lively areas the tunnels will need to be trimmed often. This will also make it more dangerous, fires can spread easily and engulf large areas of the forest. If the trunks are mostly 'immune' from fire then that might even be a tactic to clear out a city-sized area, the larger branches surviving and can be used as building supports.

Re-writting my post to pull my rambling thoughts into something more coherent. Still not sure that it works as a stand-alone answer, but here it is. =^)

For medieval-level tech without metalworking or stoneworking, in an environment where fire is exceptionally dangerous, is an interesting question in and of itself.

II. Potential Power Sources: People-power, animal power, cistern-driven water-wheels, and possibly the very, very cautious use of fire. They will need to have learned to use the power sources to excellent effect -- in most earth-societies, fire has been fundamental and central to life, but your culture will need to be much more cautious with it than any IRL society has been. Do they use it at all -- is any use of fire worth the risk? If so, how is it controlled (both in the physical and legal senses)? Do they eat all their food raw?

III. Agriculture: Medieval-level tech requires, I believe, a full agricultural society. Without access to the ground, it would likely be epiphytes based agriculture -- Taking advantage of every vertical surface they can, sine the ratio of agricultural space is going to be relatively low.

IV. Livestock: this is where you get to have fun inventing creatures =^). They will probably have several species of arboreal livestock; milk, cheese, eggs, leather, glue, feathers, wool, hide... keep in mind arboreal creatures will generally be relatively small, so the amount you get from any individual creature will be limited.

IV. Architecture: This will likely be a humid environment, without a lot of wind; therefore, they will want to minimize walls that block what little air-flow their is. Lattices (with epiphytes going on them), curtains made out of feathers, and the like will probably be common.

From the trees you've described, they would be unlikely to grow in the same way as earth trees. It could very well be possible that they have a much greater width:height ratio.

If they are getting moisture/nutrients all the way up the trunk, they could grow outwards much quicker, so having trees that are so tall that inhabitants part-way up could not see the ground/canopy would mean they might have the circumference of a city.

In terms of any development of a society, if you think of each tree as the residence of a single town/tribe, they would have either have had to be self-sustaining or have found a way to go from tree to tree.

To be self-sustaining, the tree must provide everything people need, such as food, shelter and water. Water could be taken directly from the tree, and the tree might well grow fruit directly from its trunk (particularly if this is where it is getting nutrients/water from), that the people could eat. This might mean them having to be sustainable, or making climbing equipment to go quite far up or down the trunk from where they live.

As for where they live, they would either have to build upon an existing branch, or hollow out the tree and carve out some accommodation inside. It is likely, however, that if the trees continue to grow rapidly, any inside accommodation would also change over time, and would need to be constantly maintained without ruining the structural integrity of the tree holding itself up.

Each tree of such a size would be very far from other trees, as they would compete too much for resources, so reaching other trees would be difficult. Humans living in trees would eventually try to discover others, as it is human nature to explore, so they would have found a way to do it.

One way could be to travel out to the farthest stable point of a branch (which would be very long and sturdy if they obtain nutrients in the same way as the core of the tree), then create a swing from the trunk to the far point, and swing out to get to the furthest point possible. They may be able to reach another lower branch via this method, and then build a bridge back across.

If they have the materials to create bows & arrows, they could also shoot across to another tree and climb over, as long as the person is light enough and the arrow is properly anchored into another tree.

So cities might reside within the interior of a tree, with plenty of pillars to make sure the tree can still hold itself up, possibly full rings in concentric circles, with richer people living closer to the centre. Then as the tree grows more people can live inside each tree.

This would mean connections between trees would be like roads connecting different cities.

If the branches are sufficiently thick, people could also live on these branches, constructing homes on them from the wood used to hollow out the tree.

12
Can you actually have a Forest Kingdom?
7
City in the wake of the Yggdrasil: Engineering Considerations