A creature I am imagining is a small mammal about the size of a domestic cat which - through symbiotic bacteria which live in its fur - is covered its whole body over in blue-white bioluminescence, 24-7.

Is there any reason why an animal would be bioluminescent all over its body rather than in just one part or a few parts? The light can't be "turned off". If you need to know; the creature is terrestrial and lives in a forest environment which is, for whatever reason, permanently in relative darkness. It eats fruit, nuts and the like, is social, and not physically dangerous to aggressors (at least when alive, it can be poisonous if necessary).

Note that the method of light production, mentioned above, is also open to change if it needs to do so to fit your answer.

If it is caused by a bacteria, everywhere or nowhere would be the obvious choices for location. The bacteria could even be commensal where it doesn't help or hurt the creature. If the creature has hollow hair follicles for reasons(Doesn't matter really, hold over from arctic evolutionary phase, extra buoyancy, weight, biologically cheaper, etc...) then the bacteria could have evolved to fit inside the hair follicles, (free ride) and the rest is history.

One possible advantage to the creature in this is that the GITD bacteria fill the ecological niche and keep out other things. They live, fill space, photosynthesize and keep other things from growing, much like a good chunk of our gut bacteria serve to slow down C. diff.

There doesn't have to be an advantage though. It could just be something floating around that colonizes the young of the species and short of shaving they never really get rid of.

Bioluminescence in animals generally serves the purpose of sending some sort of message to other animals. These other animals could be members of other species and the messages serve purposes relating to predator and prey interactions or these messages could be intended for individuals of the same species and most often play a role in mating. Bioluminescence has evolved independently dozens of times for different purposes, but here are what I consider the two most likely uses:

Aposematism is the concept of using your conspicuous appearance to advertise that you are unwise to attack. If your animal is poisonous or otherwise dangerous to potential predators bioluminescence might play this role. Perhaps the bioluminescent bacteria themselves are unpalatable.

Sexual selection is responsible for the majority of visually striking animals in nature. In a process known as a Fisherian runaway preferred selection for a certain visual trait by potential mates leads to the evolution of displays that would otherwise be extremely maladaptive. The classic example of this is the tail of the peacock. Perhaps glowing doesn’t serve any real purpose besides making your animals attractive to the other sex.

Many bioluminescent creatures on Earth are semi- (or very-) transparent with the illuminating component inside the body where the chemistry is protected — where it can't be corrupted or washed off.

If you want something akin to "reality," consider making the fur semi-transparent and with the bioluminescent inside the fur for the same purpose.

It's somewhat unbelievable that a bioluminescent creature would glow noticeably in full daylight. But it is believable that the glow would create an under-color to the grayish, shimmer caused by the semi-transparent fur. Personally, I think this would not only look cool, but it would give the creature something a a chameleonesque camouflage during the day as the reflection of surrounding colors would combine with the creature.

At night the creature would look blurry due to the semi-transparent fur. Almost like a big wil-o-the-wisp.

Finally, it removes one aspect of the creature you might have been depending on: the fur, once shaved from the body of the creature, would stop glowing. This is because the hair is removed from the follicle (and the chemistry of the body). If you were counting on harvesting the glowing fur as an aspect of your book, this would be unfortunate. But it would make the creature very hard to prove exists since no glowing fur would ever make it back to the village.

IMO, you can believably have an all-body bioluminescent creature using the same mechanisms terrestrial bioluminescent use, just on a somewhat larger scale. Evolutionarily you'd have trouble justifying the creature, but do we care?

It was genetically engineered to be that way. 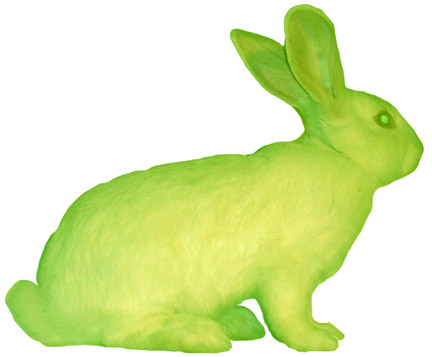 Way back in 2000 an uniformly green glowing rabbit was made as an art project. Since then all kinds of other glowing animals have been made. They glow in various ways.

So too your animal. The linked animals themselves create glowing chemicals in their cells. But for yours, perhaps the symbiotic bacterial were engineered and the host then engineered to support them.

Why? Maybe an art project? An attractive pet? I have seen glow engineered fish for sale at PetSmart. Possibly to enable medical experiments?

Not the answer you're looking for? Browse other questions tagged biology creature-design evolution light or ask your own question.

6
bringing darkness to live
9
Ultraviolet bioluminescence
6
Help me Explain this Alien's Traits
9
The Science of the Marsupilami
3
“Realistic” Dwarfs Part One: Bioluminescence for active Vision
6
Foraging behavior of a forest slime
2
How would a “flaming collar” work in an animal and how could it be useful?
3
Is my Bioluminescent, Four-legged, Bat Creature Possible?