In my dream I have been chased by a plane which had chainsaw blades instead of wings. That woke up my inner worldbuilder and instead being terrified, I started to wonder if something is even possible. So I summon you, my fellow Worldbuilders to help me with this:

Design an airplane which uses chainsaws to propel itself

Yes, the plane itself serves for a horror story, so worst case scenario, I could always use some magic and/or handwavium, but still ... Is it possible to have a plane like that?

No, this will unfortunately (?) not work as advertised.

The basic problem is lift. There are three basic ways I can see a chainsaw mechanism generating lift, and all have insurmountable issues.

One is basically using the mechanism of the saw itself to push air down with, effectively, little scoops instead of teeth. This might work in water, which is a lot heavier (paddle steamers use this to travel forward rather than upward), but with air the volume you'd need to push down would far exceed your available power.

The second, somewhat more practical, is to turn each individual tooth of the chainsaw into a wing, which generates lift as it turns. This is basically how helicopters work, except that their blades only go around in a circle instead of in a pill shape. The problem here is that even if you could get it to work (and the connection of the teeth to the "hub" seems very suspect) it will look and act much more like a helicopter blade than a chainsaw: the "teeth" will be long and thin, and rotating extremely quickly. Trying to saw through things will put immense torque on the teeth and probably break them.

The third option is to taper the profile of the teeth and saw such that the saw itself is a wing. This approach will generate lift, but has issues of its own. One is that the edge of the wing, where the teeth are, is normally where the control surfaces are. Having a bunch of fixed, moving slats in your wing is going to lead to some profoundly odd handling characteristics. It will not fly even remotely like a normal plane.

More problematic to the wing approach is that chainsaws are not designed to saw through things at full speed, the way you see in zombie movies. They're designed to be pushed with slow, constant pressure like any circular saw. (Think of a table saw: you don't throw boards at it, you push them gradually into it.) Any practical design will have a stall speed that's far faster than its safe chainsawing speed; if it's going fast enough to generate lift, it won't be able to cut through objects fast enough and will become stuck or will fling objects away at high speed.

A vehicle that both flies and chainsaws may be possible (though probably not practical) but a single mechanism that both generates lift and is a usable saw at the same time is not.

A plane won't be able to do it because wings are not meant to take the shock of an impact. You would also be risking a lot by trying to mow down a person: you'd have to fly too low and you risk bits ending up in the turbines. If you ever read news about what birds do to airplanes, you'll see that never ends well for the plane.

Did you know that drones are not vegan friendly?

No, seriously! Nowadays anyone can buy a drone, and given the idiotic nature of humans, there is always someone being hit by a drone by accident somewhere in the world. In order not to kill nor injure people too much, drone makers try and use shapes and materials that will hurt as little as possible. Tests are usually done by getting the blades on a track and accelerating them against a target which is usually pork, to simulate a blade hitting human flesh. If there is too much damage, the blade gets redesigned and retested. 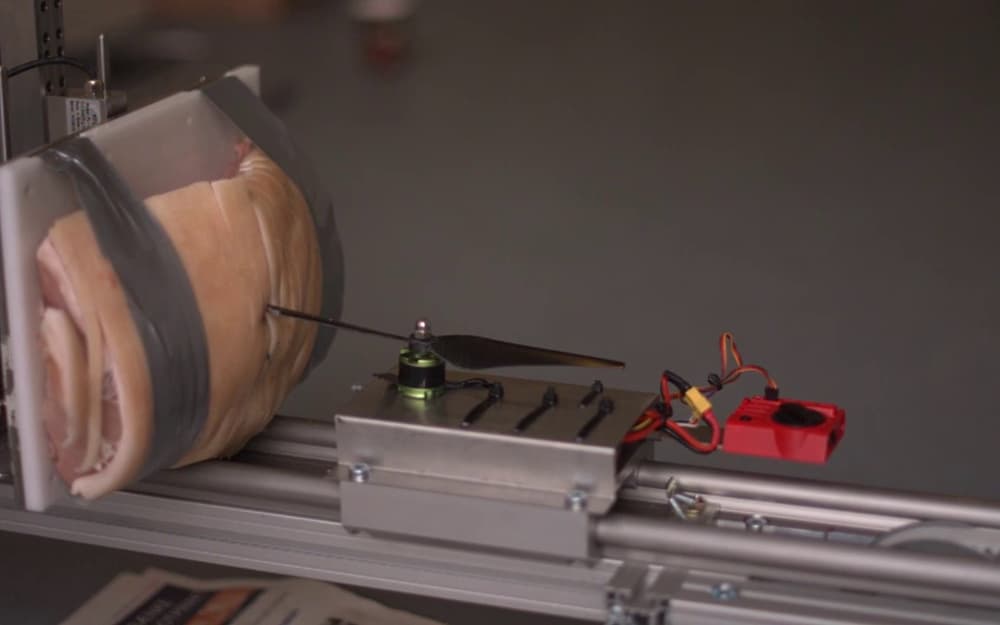 Notice that the industry has to make an actual effort to make drones harmless. All you need to do to make them deadly is being lax and using cheaper materials.

You may now think that this doesn't live up to the question because drones are small and won't seat a pilot. Wrong! A company called Ehang is working on pilotable drones: 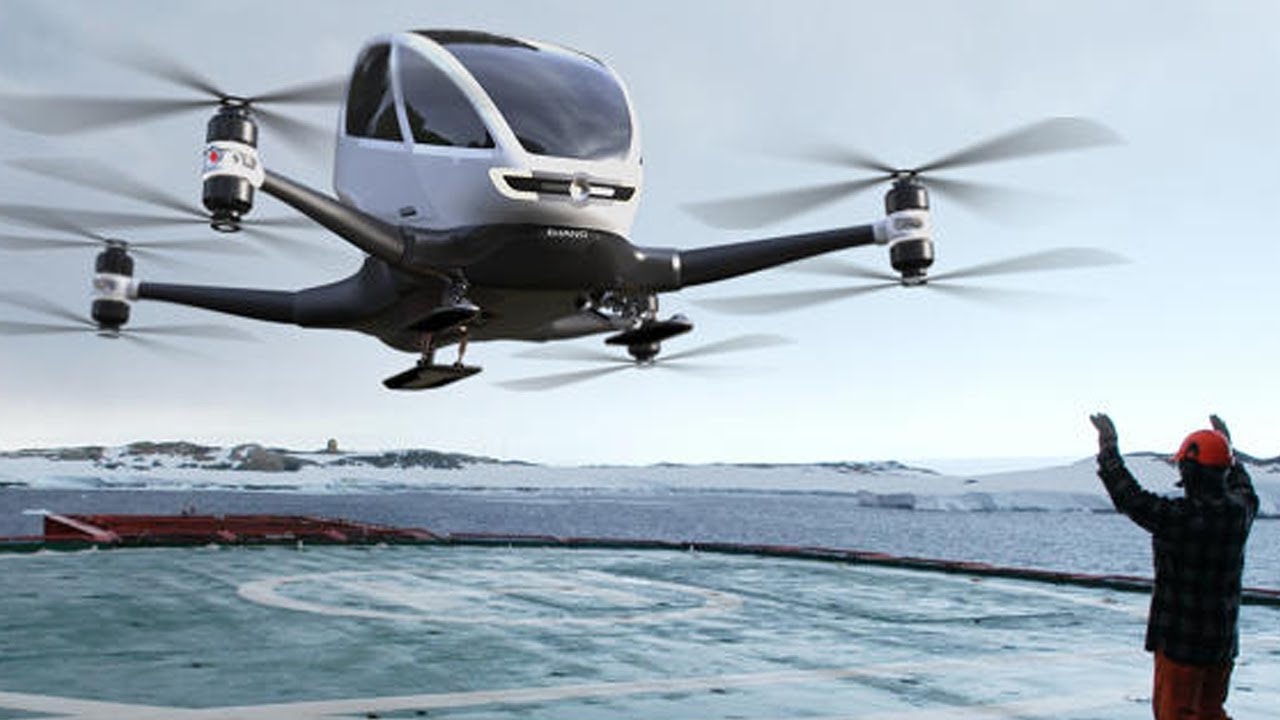 You could take most of the housing out to make it more personal: 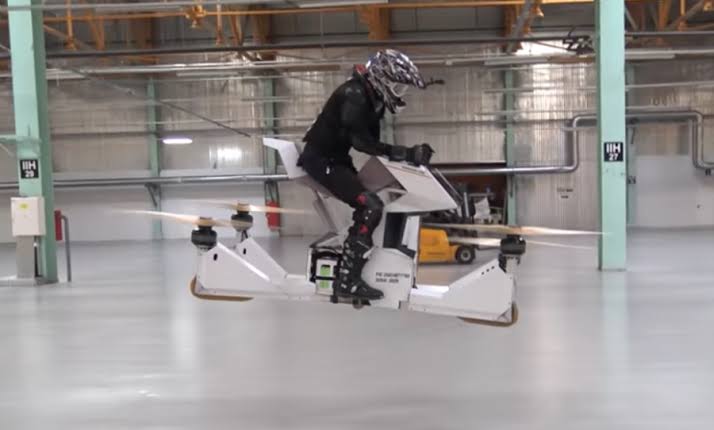 Or even use a bathtub, to turn horror into trash horror:

All you need now is for the blades to be replaced with curved chainsaws; Shape the chainsaws so that they are curved like helicopter blades and fly towards your targets. Don't forget to wear a helmet and follow safety procedures!

Perhaps the magnus effect might get you close enough to sci-fi plausible here.
It says basically that an object spinning in a fluid generates a force perpendicular to the axis of rotation.

So basically something like this model airplane that uses KFC buckets for wings, just put little chainsaw teeth on the cylinder-wing-things.

To fly you fundamentally need two things, lift and thrust. The chainsaw only adds one more consideration which is cutting speed.

Many of the answers so far have focused on the "chain" part of a chainsaw and have completely forgotten that a chainsaw is made up of a bar and a chain. If we utilise both this is much simpler.

To get the lift with chainsaw is fairly simple. We design a specially shaped chainsaw bar that can serve as an airfoil. Basically this will look more like mounting a chain to the edge of a actual aircraft wing because that's what shape we need for the lift.

Thrust can be provided by a traditional airplane engine and propeller. If we use a strong enough one it will also be able to power the chainsaws without the need for a second engine. Too me your description sounds like an old spitfire or similar with chainsaw blades on the wings. This should fit perfectly.

Getting a plane in the air with a cutting chain on the front edge of each wing in the easy part. The hard part is staying in the air while cutting. As others have said traditional chainsaws are designed to cut slowly with constant pressure.

However it is possible to design a tooth pattern to increase cutting speed. This involves making the cutting edge thinner (less material to cut) and increasing the aggression of the cutting angle (deeper cuts). In traditional saw this would raise the stall-point and cause the blade to catch. However as can be seen with competition hot-saws used in timbersports, if we add a bigger engine (usually a 250-400cc motorcycle engine) we can cut faster.

In our case we already have a thumping huge jet engine we can power our saw off. Combine the massive power with the aggressive tooth pattern and we should be able to reduce the drag from cutting enough to keep us airborn.

All that increase in power and cutting speed increases the stress on the chain though. So it is likely we will need to make it out of something stronger than steel. There are a number of light weight high strength materials out there. Using one of these will help to reduce weight as well as prevent the chain from breaking.

Yes, absolutely we can build a plane with chainsaw for wings. And yes we can make it be able to cut through tree, people and hoards of zombies while remaining airborn. We have the technology, we can build it.

This does not fulfill the requirements, but:

It is certainly possible to build airplanes, helicopters, gyrocopters, airships, hovercraft, and other air vehicles that have payload capacity, the ability to lift more weight than the necessary mechanisms that make it fly, weight devoted to crew, passengers, cargo, weapons, etc. Therefore it is easy to build an aircraft that uses some of that payload capacity for attached chainsaws. Those attached chainsaws would have to work very fast if they could cut through items at the aircraft's normal speeds, so I suggest a plane that can fly as slow as a Wright flyer or other early airplane, and maybe hover almost motionless, that has super speed chainsaws attached.

This does not fulfill the condition that the chainsaw be part of what drives the aircraft, but other answers show that would be impractical, and even a chainsaw that works at flying speeds would be a major technological development. So maybe you will have to be satisfied with a relatively normal, though unusually slow and low flying, aircraft that has highly advanced super speed chainsaws attached.

Not the answer you're looking for? Browse other questions tagged science-based reality-check weapons aircraft or ask your own question.