What are plausible reasons for aquatic axolotl-like animals to walk on land?

In my world the resident humanoids evolve from beaver sized aquatic axolotls.The only land on the planet can be considered mountainous terrain. Imagine a volcanic crater where only the rim surfaces. Eventually after thousands of years of living in colonies of floating seaweed huts they begin moving onto land (while retaining the ability to live underwater essentially becoming amphibeans). For reference this is what an axolotl looks like- 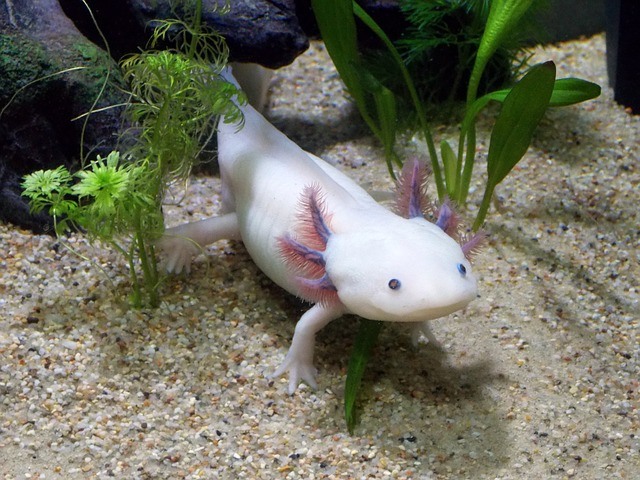 Why would a creature like this evolve to walk bipedally on land after thousands of years of the species living solely aquatically?

Axolotl are an interesting choice because they have a very weird evolutionary history. Axolotl are actually evolved from more land-living amphibious salamanders by neotony, that is they evolved by the immature - and purely aquatic stage - of an amphibious organism becoming sexually mature. For an axolotl to become amphibious is therefore very easy, it's actually possible to artificially induce metamorphosis to a salamander like state and thus the pathways necessary still exist and just need the right conditions to favour them for evolution to do the rest.

The rest of it is not that dissimilar to real evolutionary history, which is far too long and complicated to do justice to in a single Stack Exchange answer, but in super-duper tldr; mode: first you need to evolve to be properly land-living: i.e. evolve proper lungs, skin that can cope with being dry, and eggs that can be laid on land. Then you need to evolve proper quadrupedal stance, so the legs are orientated under the body, rather than to the side as in most lizards and amphibians. Finally, you need a situation which favour bipedalism. It's not really clear what exactly this is: it's evolved in various dinosaurs (including birds), kangaroos, and humans.

Incidentally, beaver-sized Axolotl are likely not biologically plausible due to the requirements for respiration which since the surface area of their skin and gills increase with the square of their size, won't scale sufficiently to match their increase in volume.

Also, thousands of years is super-duper ultra-quick in evolutionary terms: whilst significant change can occur on these timescales during adaptive radiations, it's far more credible for the kind of changes you discuss to take place over tens, or hundreds, of millions of years.

Let's review the long-standing and dominant theory on why some monkeys started walking to become what we are today.

Climate change was a key driver of the process. Several million years ago, Africa began to lose some of its forests as vast grasslands grew, so our ancestors gradually left their ancestral forests and moved out onto the savannahs.

Bipedalism made more sense in an environment where trees were rare.

In your world you could say that climate change led to floating seaweed to disappear. Your axolotls were forced to move on the land. The majority of land in their region was savannah so they start walking upright and then from there on they follow the same pattern as monkeys -> human.

Standing upright frees the hands which can be used to manipulate tools. This increases the brain size and they become smarter, discover fire, agriculture etc... .

There wasn't enough food in the water for your Axolotl to survive off. The ones who managed to scavenge food off of the land had a higher chance of surviving and their adaptation to living in both land and water allowed them to get a small edge on the other Axolotl. However since they didn't have the usual defense mechanisms of land creatures, they would always retreat into the water for safety. So the ones that could go on both land and water had a higher chance of surviving and passing their genes on.

There are dry and wet seasons. In the dry season, the water disappears (look at mud skippers for this) and he Axolotl had to migrate to a new and larger body of water. They have to move above ground and those best suited survived the journey. The better suited ones were able to claim new homes with plenty of food before the rest and so were able to pass on their genes as they had a higher survival rate.

A stretch, but maybe they needed slightly more oxygen than other sea life and had to consume air and water to better survive. Those that became more suited at a mixture of both survived and as a result they can survive for extended periods of time outside of water but need to remain moist to help aid they breathing system.

Not the answer you're looking for? Browse other questions tagged evolution natural-growth or ask your own question.

9
How realistic are four legged aquatic animals?
8
What are the evolutionary factors that could create a species that looks like E.T.?
3
What would be a plausible mechanism for conception involving an arbitrary number of gametes?
7
What possible combinations are there for hexapods?
8
Plausible reasons for evolution of humanoids with multiple pairs of eyes
9
What would terrestrial animals derived from cnidarian ancestors look like?
1
What might be a plausible explanation for the drastic lowering of global temperatures?
2
What would be evolutionary reasons for a humanoid species to develop multiple arms?
0
Effects of a star and planet on human evolution