I'm writing a story that will eventually escalate from being focused on one planet to the entire star system that planet belongs to, and finally to a big story involving the two nearest star systems to the one the Original planet is located in.

So what I would like to know is what is the minimal distance these different star systems will have to be apart from each other? (I don't want them so close as to be binary star systems but the 3 different systems should not influence each other with gravitational pull either)

P.S. If it matters what type of stars we are talking about, if we call the Original star system A and the others B and C then A has a Main Sequence Star (basically our sun), system B has a Blue Supergiant, and system C has a Red Dwarf.

Any advice will be greatly appreciated.

What makes a couple stars a binary system is the both of them having a stable orbit around a common barycenter. If they don't share that, then they are not a binary no matter how close they are. They will be doing a flyby on each other and will spend years to millenia close, depending on relative speeds.

As Alex said in the question comments, any star closer than a couple light years to the sun would disturb the Oort cloud. The practical consequence of that is a comet bombardment on every planet. Other than that, check this table of the closest stars to the sun and their distance to us over time: 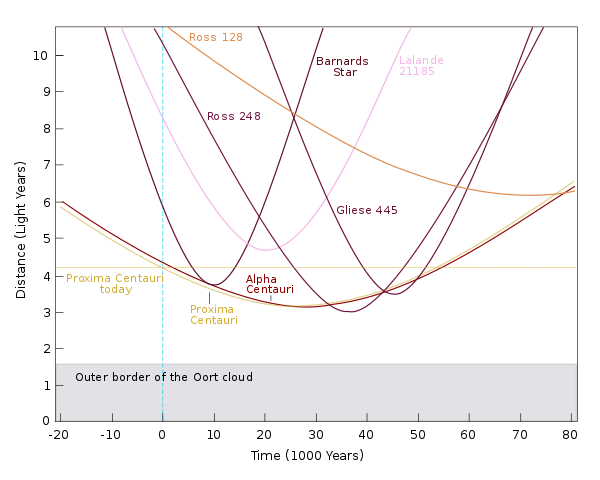 You can use this for inspiration. Those stars are probably the ones we are going to visit first if humanity doesn't destroy itself before we go interstellar.

Take into account that stars orbit the galactic core just like planets orbit stars; but their orbits are much more varied. Think about the timespan of your story. Over dozens of millions of years, stars have moved so much relative to each other that you don't get to see the same constellations. A star that is close today may be too far in the future and vice-versa. But for a timespan of millenia they should stay put, figuratively.

If you give a look at the list of the closest stars to Earth (from where the image below is taken), you see that the closest is at a few more than 4 light years.

Since our planet has been not significantly disturbed by neighboring stars to the point of being ejected from its solar system, and considering ours is the only system we have been able to investigate in such fine detail, you might take that as a reasonably upper limit for a safe distance. 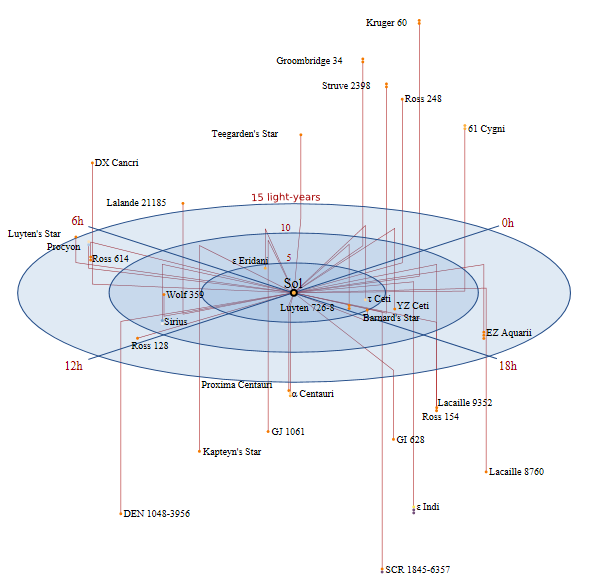 It Depends on Your Stars

r is the distance.

Typically (for stars near our sun) stars are moving in our part of the galaxy at speeds of about 10 to 20 km/s. Which is 10,000 to 20,000 m/s. However, only the relative velocity counts, since we are looking at everything from the perspective of one of the two stars. That being said, I think you are looking for the distance at which an escape velocity is under a kilometer per second.

Plugging in different values for r, I get these values for $V_{escape}$ from a star as massive as the sun :

A blue supergiant, like Rigel, has 23 times the mass of the sun. The escape velocity at different distances would be -

And a dwarf, like Proxima Centauri, has a smaller mass of 0.1221 Suns. The escape velocity at different distances would be -

This is additive, so your blue supergiant could be no closer than 1.5 light-years + 3 light-days to the red dwarf

The Traveller RPG assumes star systems are approximately 3 light-years apart (one parsec to be accurate, about 3.2 light years). The wiggle-room is roughly plus or minus a light year. This allows sufficient buffer space to (1) fit the interstellar "jump" drive scheme for the game itself, and tangentially (2) not interact with others' gravitational fields.

Here is a link to another question and answers with a similar topic:

How close could another solar system be without adversely affecting our own?1

You could get other stars quite close, within a tiny fraction of the distances of the nearest stars to our solar system, without disturbing the orbits of planets.

But a nearby star at the distance of the Oort Cloud of a solar system would disrupt the orbits of millions of comets and send some of them into the inner solar system to bombard planets causing multiple extinction events. Intelligent life on a planet would have to have a very active defense against incoming comets. So they would have to develop advanced interplanetary travel before the comets started arriving.

And if the stars were packed as close as in globular star clusters or the galactic core, any habitable planet would have been irradiated and sterilized by a number of nearby nova and supernova explosions during the billions of years it would take for intelligent life to evolve on that planet.

Perhaps super powerful aliens created a force field generator to stop the dangerous radiation from nearby novas and supernovas and then seeded the planet with life that eventually evolved intelligence. And perhaps the natives find and accidentally turn off the generator and then their astronomers say a nearby star is about to go supernova.

Not the answer you're looking for? Browse other questions tagged science-based planets stars solar-system .

12
How close could another solar system be without adversely affecting our own?

6
A Binary Sun, A Hot Jupiter and a Binary Mars...All Within View of Earth
8
About how many planets are plausible for this binary-star system?
8
Radiation from binary star systems and how that would affect a planet orbiting both stars
2
A K-Type Binary Dawn/Dusk in the Equator
2
Longest possible eclipse in double star system
10
What would seasons and daylight be like if the Earth was on an eight-shaped orbit between two stars?
0
Is a Habitable Planet With Three Suns and a Moon Realistic?
4
Seasons of an exomoon in a binary star systems