We know through the works of Babbage, Lovelace, et al. that mechanical computers (computers operating through gears, cogs, etc., and powered by steam or some other arbitrary non-electric power source) are possible.

In our world, it has been observed that electronic computers obey various forms of Moore's laws, with exponential growth.

In a world without electronic computers as we know them, would mechanical computers display a Moore's Law-like exponential curve of improvements? If not, why?

I would allow limited use of electricity as a power source, but not for driving logical circuits. Cathode-ray tubes, while technically being a form of a vacuum tube, could be allowed for display only, but I'm thinking more the use of mechanical television instead if at all reasonable. Standard electric-dependent computing components such as RAM, ROM, ferrite core memory, and hard disks are definitely out.

First of all, Moore's law is not a law of physics like Newton's law of gravity. It is just an empirical evidence that has held until now, in a quite surprising way.

While we have been able so far to shrink and shrink the size of electronic components, that is hardly possible with mechanical elements, therefore I highly doubt a mechanical equivalent of Moore's law would hold for more than few generations of calculators.

After that it would just be an horizontal line.

Elmy's answer to a question of mine made me realize what might be the most limiting factor for applying Moore's Law to mechanical computing.

Or, more accurately, your ability to keep dirt out of the works.

The beautiful thing about electronics is, other than heat dissipation, it's irrelevant how dirty it gets. But dirt gets in the way of spinning gears. No matter how well you try to seal it, you'll get dirt (if only in the form of congealed grease, metal shavings, wearing bearings and bushings, etc.).

In other words, you can realistically build a mechanical computer as small as (a) a gear can tolerate a grain of dirt or (b) you can keep the works sealed to prevent dirt from getting in.

Modern mechanical wrist watches demonstrate substantial size reduction in gearing — but they're also so well sealed that you need often need tools just to open the case. They could likely be made smaller, still, but you start getting into the problem of the slightest shaving causing you a problem, and a mechanical computer is much larger than a wrist watch.

So, where Moore's law was originally (and basically) the density of transistors doubles every two years. The mechanical variant of the law would be the size of a gear halves every two years. After 20-30 years, you're down to where the slightest speck of dirt would stop the machine. IMO.

Moore's law is the recognition that semiconductor complexity (in integrated circuits) increases at a particular rate.

The very Wikipedia article itself you linked to states that

Despite a popular misconception, Moore is adamant that he did not predict a doubling "every 18 months". Rather, David House, an Intel colleague, had factored in the increasing performance of transistors to conclude that integrated circuits would double in performance every 18 months.

The cited source (link, alternative link), in turn, states that

(My boldface all three.)

It's likely that miniturization would follow some curve, but I can't imagine you'd get to have cogs in the low nanometer dimensions (the same order of magnitude as features of modern high-density integrated circuits). That's simply because you'd need enough material to hold itself together, while performing some kind of useful work. For example, turning a cog to increase a counter will require some amount of energy, which must be delivered to and ultimately supported by the cog.

To have physical components of those dimensions, you'd likely need some kind of super-material to hold together, and hold its shape, under those stresses. Barring that, it seems to me that you're likely to hit a physical limit at much larger dimensions than those viable for anything resembling a present-day integrated circuit.

You can in theory make 'mechanical' machines right down to molecular level. They already exist in biology, for example rotary motors:

And also other machines such as ribosomes and the following:

Reasearchers are currently working on so-called biological computers that work in a different way from the standard von Neumann machines of today.

Mechanical monitors would also have improved at a similar rate, having developed from this mechanical TV: https://www.vox.com/2015/3/25/8285977/mechanical-television 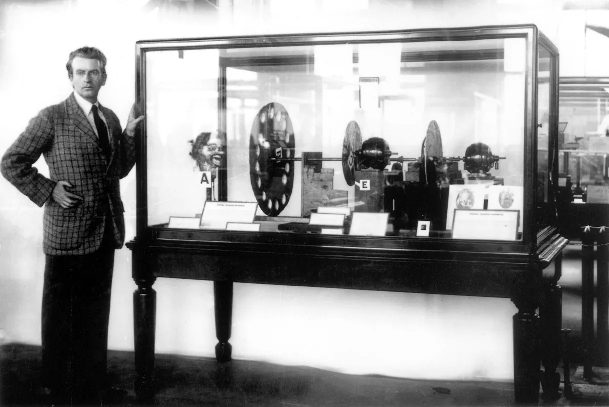 The simple answer is: yes, because they did. They didn't follow Moore's Law (which as Moore said was never actually correct, nor did he ever expect the trajectory to continue), but they existed, and the trend to miniaturisation certainly did continue until transistors took over.

People tend to forget that a clock is a mechanical computer. Early clocks were massive mechanical systems. As time went on (pun intended), machining abilities allowed people to shrink the size of clocks until it became possible to build pocket-sized watches. Chronometers followed the same trajectory - Harrison's original chronometer required a large wooden box, but his later chronometers were the size of large watches. Watch movement technology and winding mechanisms evolved over time, and became more miniaturised to the limits possible with machining and materials.

With watchmaking having firmly established how to construct minaturised mechanisms, mechanical computers were extensively developed and used throughout the first half of the 20th century. By WWII, most planes, warships and artillery used mechanical computers called "predictors" to improve accuracy, allowing for windage and (for aircraft and anti-aircraft guns) relative speeds.

These pure mechanical computers were still being surpassed by electro-mechanical computers though, which integrated banks of relays with mechanisms to rotate those banks of relays. Relays are mechanical systems with electrical power. Everything that transistor switches currently do can be done (albeit more slowly) by relays, and in fact early adoption of transistors was simply as drop-in replacements for relays in existing electro-mechanical computers. Had the transistor never been invented, it seems very likely that the direction of travel would have been the development of smaller and more reliable relays. (To digress, Terry Pratchett's novel Strata supposes this as part of the underlying mechanisms in Discworld.)

And then Diskworld. You may say "definitely no hard disks", but that's nonsense. A hard disk is a mechanical system with electrical power. Our current hard disks are a development of drum memory, which is more clearly a classical electro-mechanical system. Hard disks are actually one development which is almost inevitable and independent of electronics. They wouldn't be as good as what we currently have, sure, but they'd be around.

So in your electronics-free world, the end result would be increasing miniaturisation of relays and relay-based computers. Of course this could never approach the size of a transistor, but we might well have pocket calculators, fairly complex landline phone systems, and warehouse-sized computers of the kind that were available back in the 1960s. Moore's Law would probably stall there, in the same way as it has currently stalled for silicon.

Ugol's Law is a law, in that it attempts to explain nature: ”You're not the only one."

However Moore's Law is not a law at all. It doesn't explain nature, it commands -- well, not nature. It commands research and development.

It is an industry agreement on how to spend profits. Specifically, to give profits over to R&D enough to drive that rate of processor power increase, instead of paying that money to shareholders as dividends.

Or think of it as industry collusion to limit R&D money to a level that doesn't consume all profits and cause companies to bankrupt themselves and each other trying to keep up in an exponential technology race. It allows shareholders to profit-take.

Conversely, it allows management to stand up in shareholder meetings and explain a weak year with heavy R&D investment: "we needed the R&D funding to hit our Moore's Law targets".

So, not a law at all, just a super cool development schedule that allowed shareholders, managers and developers alike to share the dream.

The answer to your question is

Moore's Law bears on mechanical computers exactly as much as that society chooses to make Moore's Law (or some other development target) a part of their national vision/commitment/insanity.

You get exponential growth if the growth furthers more growth.
For an industry, that means that the products not only sell well, they also help building the next generation of production lines. In the case of integrated circuits, this happened not just with computers helping to the planning for the next generation, there was also the engineering industry that used the research results from generation X's imaging and precision tooling improvements to build the tools for generation X+1.

For mechanical computers, this self-improving cycle never took off. The machines were always too difficult to make, some of them even predated the era of mass production (Leibniz built one), some simply were out of reach for the engineering technology of the time (Babbage, he couldn't find a workshop that would produce the cogwheels at the required precision).

I think we did have exponential growth in mechanical engineering during the Industrial Revolution though, so I believe the answer would be: Yes there was Moore's Law for mechanical stuff, it just didn't happen for computers but for steam engines and related technology.

There was also an explosion of electrical engineering once the basic technologies around alternating current were available.

I.e. my current theory is: technological progress is a series of exponential improvements that run until they hit some barrier (as is typical for exponential growth).

Integrated circuits aren't the only example of rapid exponential growth. Nuclear weapons increased in power ~10,000 times in just a couple of decades. Turns out, they were easy too.

Unfortunately, we don't have an easy process for making gears. Manufacturing precise machines remains hard. I think a mechanical computer could be built to be relatively powerful with tiny components sealed from dust and with error correction to work around failures. But building the second would take just as long as the first, and be uneconomical. (Without lithography, we wouldn't have gotten very far with hand-assembled vacuum tubes either.)

If you could imagine a similarly easy way to make mechanical computers, then you could experience some period of rapid exponential progress.

Not the answer you're looking for? Browse other questions tagged science-based computers steampunk .

11
Feasibility of a purely mechanical grayscale "computer monitor"
8
What is a realistic computational limit for a handtool-made mechanic computer?

78
How would an aquatic race develop computers?
40
Just How Powerful Could a Mechanical Computer Be?
4
How would quantum computers be safely released to the world?
4
What fields of computer science would change in a world with mechanical computers?
1
How much force would this weapon apply?
11
Feasibility of a purely mechanical grayscale "computer monitor"
8
What is a realistic computational limit for a handtool-made mechanic computer?
19
Non-visual Computers - thoughts?
11
How would a civilization without reading and writing develop general-purpose computers?