Building a full-sized Lego Earth - what would it look like at various levels?

Lego representations of Earth have been made at various scales, for example this one: 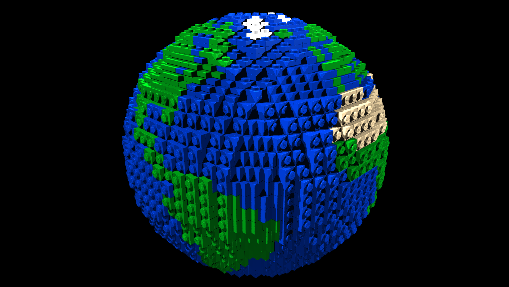 Suppose Slartibartfast made a full-size Earth from Lego (including the oceans being represented as solid blocks. It is made inside his huge cavern inside Magarathea.

Magrathea is an ancient planet located in orbit around the twin suns Soulianis and Rahm in the heart of the Horsehead Nebula.

Clearly the gravitational force of the artificial Earth would affect it in some way. Presumably the core would melt but the surface would still consist of individual blocks.

EDIT For the sake of calculations, let us use the classic brick with 8 knobs, 2×4. It can be assumed to weigh 2.22g

Units in diagram are all in millimetres. 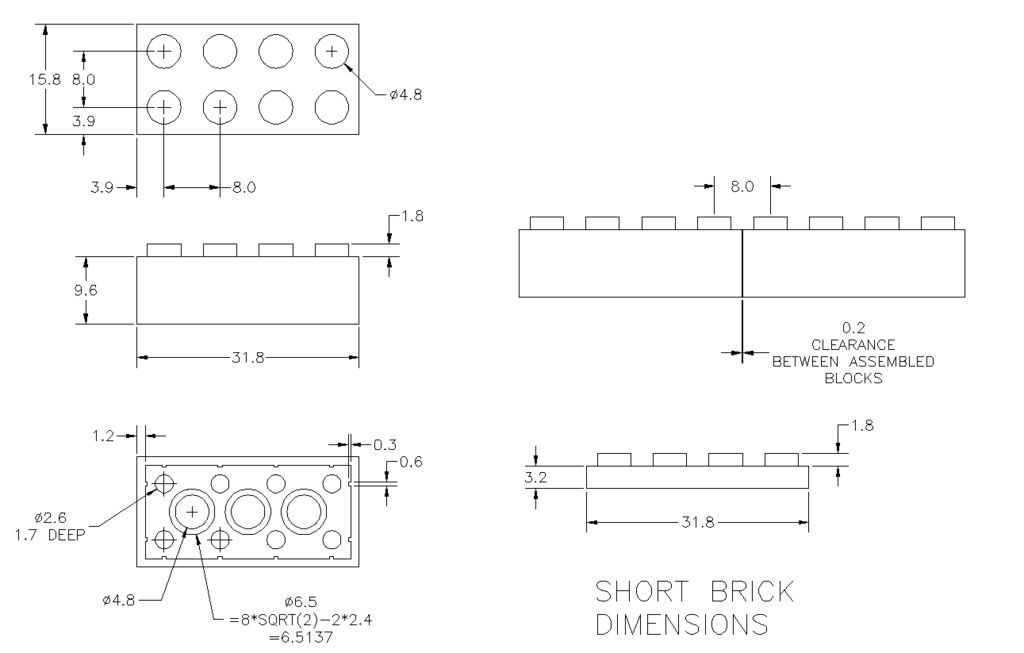 To the actual thing! Based on comments (of my other answer), I'll assume:

That said, about ABS, as given by the OP in the question:

Basically that means, that the lego blocks basically don't deform much, but they soon break: it doesn't stay too much in the linear regime.

Calculating the all materials' data

Where $G$ is the shear modulus (describes what happens when one applies shear stresses), and $K$ is the bulk modulus of the material (proportional to the change in volume of the object under hydrostatic pressures) (we won't use $K$).

$\nu\approx 1$ means the brick will tend to volumetric expand/compress under pressure, instead of giving preference to the direction we're applying the stresses. Also, $G$ and $K$ are close enough to $E$, meaning, it resists shear stresses, tensile stresses and hydrostatic pressures around the same way (or, strain responses are in the same order of magnitude).

All of this data is much less than UTS and Bending strength, meaning, linear analysis is meaningless for pressures in the megapascal range.

All of this, suggests the existence of a critical radius, call it $R_c$, which will aid the transition between an ABS blob, and the bricks itself. When pressures go above 40 MPa, rupture will happen, and the structure will collapse, as the material won't be able to support it, and, the lego blocks will disappear, and all we have is granular ABS under hydro-static pressures.

Below the critical radius

Below the critical radius, we have an ABS blob subject to huge hydrostatic pressures. Our goal is to calculate the density, and that can be done by the very definition of the bulk modulus: $$ K = -V\frac{dp}{dV} = \rho\frac{dp}{d\rho} $$

The critical radius itself is not a region where the thing suddenly change its behaviour. It is a smooth transition. To calculate the exact radial size of the transition region, we would need the Yield Strength Point of the ABS, which is a data that we do not have.

But, it is probably safe to say, under a good approximation, that the size of the transition region will be much less than the radius of the entire planet. With that in mind, we approximate saying that the critical radius is a point of sudden change.

This time, given lego blocks are intact, $\rho$ is assumed to be constant, and the density of the lego bricks. We know from Young's Modulus, the lego won't deform significantly at all, thus, no change is density is good enough approximation.

Where $R$ is the radius of the lego planet.

Finally, calculation of the Critical Radius!

Finally, the thing that we are aiming to calculate!

Radial profile of the pressure

I am too lazy at the moment to plot it. But if anyone want to do that, go ahead and edit my answer. I might do it later (or I might never do).

Let's get out the calculator.

Result 1: Gravity on the surface

On the surface of the planet, the sheer mass of Lego-Earth creates about 1/9th of eath gravity, and as we assume equal density for all of the planet, we get this gravity graph, Y axis in m/s², X in meters: 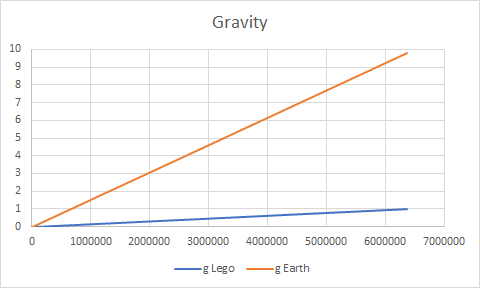 Result 2: The core does not melt.

As we don't have a density gradient to the core made from metal but the same plastic, the core does not melt.

I think that this answer should have been a comment, but it would be too long, thus, an answer. Feel free to remove this answer.

Depends on the construction. Isn't that obvious? If you construct it like a cube, having a cubic world in the end, and remove the legos until you get a sphere.. the cross section will be..... well..... you got it. If you construct a spherical shell at each time.. you will have a different cross section.

At what depth would Lego blocks be welded together by pressure?

Depends on the construction. Resistance of materials is highly dependent on its geometry, and where the forces are being applied. The same amount of material can resist much more or much less, if it is made in a certain shape or geometry.

Each type of construction will yield different types of forces applied under the geometrical form of the lego block. The material response will be different at each of them. For instance, a cube like world, the forces will come at all different shapes and and angles across the lego block, for different positions in the interior (that will create significant shear stresses in almost all blocks).

For a spherical-shell-by-shell world, most of the forces will be radial (thus less shear stresses on the block). And so on. Each of these cases, will have a different response from the lego blocks.

More, if the pressure is too high, it is possible the lego might break, and even granulate, so we will have to look at the responses of the ABS itself (young modulus, bulk modulus, shear modulus, etc).

The maximum I can do, is to calculate the pressure profile assuming the entire thing is a continuum body (no empty spaces), and search if there is an area which surpasses the material properties of ABS itself.

Polymers and plastics can have very high, or very low Young's Modulus, thus, ABS's data is indeed required. And keep in mind our small analysis assumed a continuum: lego blocks has many empty spaces. This further increases the need of the ABS data, and how exactly the lego planet is built, for one to make proper calculations.

What depth would they melt?

Depends on the construction. You can, for instance, do an isothermal quasi-static construction: Put it in contact with a heat reservoir of any chosen temperature, to make sure your entire structure has the same desired temperature $T$, that could be any of your choice. Then construct it quasi-statically: Put the first lego block in place. Wait for thermalization. Slowly, put the second lego block in place, then wait for thermalization. In the end, the entire structure will have the same temperature, and no part of it will melt.

Or perhaps you can do a sudden adiabatic construction: If a cubic lego brick earth-sized of bigger, happen to magically appear in our universe (or, to be 'constructed' extremely quickly), they would suddenly feel gravity and deform (or worse: collapse) under their weight. That elastic energy would cause heating, and then the core probably would reach considerable temperatures in the process (further increasing collapse probability), creating a temperature gradient.

Not the answer you're looking for? Browse other questions tagged planets hard-science alternate-earth .

21
A Decoy Planet made of expanded polystyrene. How big can I make it?

2
What would a default wind current look like?
10
What would it look like inside an Alcubierre field?
1
How long would a day be on two tidally locked earth sized habitable planets?
1
Earth Orbits a K-Type Star. What Would the Visual Scenery Look Like?
10
What would tides look like on a planet with two similarly sized and oppositely places moons?
2
What would an earth-sized world be like if shaped like Ultima Thule?
2
If Earth had a smaller second moon, what would the sky look like?
11
What would a Rainbow look like on an earth-like Planet orbiting a Red Sun?
1
What would be the best material and structure for LEGO bricks to built planet-sized statues of local planetary system leaders?