A reverse centaur walks into a bar - Why the long face?

A centaur as we all know is a horse with a human head (and torso).

I would like to consider a reverse centaur, which, for the purposes of this question, I will define to be a human with a horse's head as shown below: 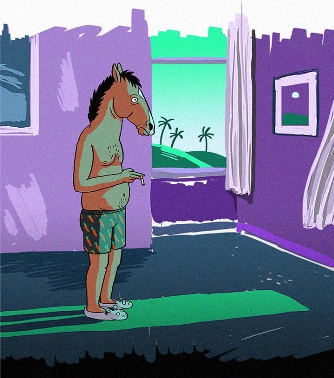 Although the creature (Bojack Horseman) in the picture is completely fictional, let us suppose that a race similar to this evolved from humans on an isolated world.

A horse's head is excellent for horses; they have to eat from the ground and chew grass.

A human's digestive system is excellent for omnivorous humans but near to useless for digesting grass.

How can we account for the evolution of reverse centaurs? What must we suppose about their diet and anatomy for this to make sense?

The first problem is that the size of a human baby's head is one of the biggest issues in reproduction. Even though a horse's head is composed of 34 bones which are not rigidly connected initially, allowing some flexibility during birth, it is still so much larger than a human head that a reverse centaur baby could not be delivered naturally.

The second issue relates to a horse's eyes. Horses have really big eyes designed to give a wide field of monocular vision. These eyes have evolved because horses are:

What these eyes are not good at is getting a good look at things close in front of them. They are also the equivalent of red-green colour-blind. The second quality is a relatively minor disadvantage, but the lack of good binocular vision of close objects to the front is an overwhelming disadvantage for tool users.

Finally, the large jaw and tooth structures are designed for an animal that needs to crop vegetation from the ground. These are an unnecessary biological cost to a tool user with opposable thumbs, that can use its hands to obtain food, prepare it and convey it to its mouth.

In short, this creature would not evolve - the horse characteristics would only be of benefit if the rest of the creature changed so that it was a much faster runner that could not use tools (ie a horse), but the "unable to give birth" characteristic makes it an evolutionary non-starter. Given sufficiently advanced technology it might be possible to genetically engineer such a creature in an artificial womb, but even if a breeding population were established they would not be able to give birth without technological assistance - and as mentioned, their rubbish short-range forward vision would make them poor surgeons when conducting the required C-sections.

Not feasible, unless you handwave the problems away with magic. Centaurs are magical creatures after all.

Diet is not your main problem, although the head of an herbivorous horse isn't exactly well suited for an omnivorous human body. The other way around simply works better. But think about the sheer size of a horse's head.

A horse's head can weigh 15 kg easily. Even if the neck and shoulders can handle that, the rest of the body won't. The reverse centaur would simply keep falling over.

Not the answer you're looking for? Browse other questions tagged science-based internal-consistency evolution anatomy .

7
Ideal Centaurs: A Torso and Four Legs
20
Anatomically Correct: 4-legged sapient creatures (“centaurs” etc.)
13
What would be the proper latin terminology for half-human anatomy configurations?
20
The Centaur--Let's Get Real, Shall We?
16
Centauromorphs: Anatomical terminology for duplicate body regions/parts
4
Could Centaurs Reload Muskets while Marching?
4
How long would it take for a centaur's broken leg to heal?
4
How could a human and a centaur do the do without the human suffering serious injuries?
6
What would be a propitious environment in which centaurs could evolve?