What mechanisms need to be in place for an advanced, peaceful society to retain high testosterone levels?

While by no means a smoking gun, there is still a reasonable amount of empirical evidence on the notion that socialization and testosterone are negatively correlated.

From the archaeological side, Robert Cieri submits that certain skeletal features (heavy brows, upper face) are directly related to testosterone levels. Below is a comparison of an ancient human skull and a near-modern skull. 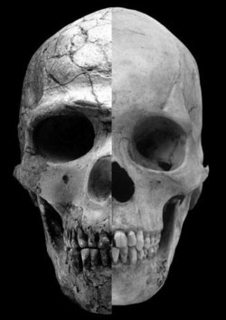 Animal cognition researchers and Brian Hare (Duke) has published a well-received paper that studied Siberian foxes and chimpanzees and noted the degree of socialization and testosterone level respectively. It is thought humans might be able to be analyzed this way as well:

If we're seeing a process that leads to these changes in other animals, it might help explain who we are and how we got to be this way. -- Brian Hare

Moreover, in modern times, due to the welfare state and the enfranchisement of women, the ancient narrative of men as brutal, territorial providers of resources is becoming outdated. I saw a study somewhere showing t-levels falling by 3% with each generation. To me, it begs the question, could it be that modern society and high testosterone levels are diametrically opposed...

Given there is a natural tendency for testosterone levels in humans to decrease as cooperation increases as shown by the scientific findings, what societal mechanisms does my world need to counteract this tendency? This question is particularly intriguing given that the society in my world is a peaceful one. An alternative way of conceptualizing the question is can a peaceful society still retain males with high levels of testosterone (through societal means only)?

What do we mean by "societal mechanisms"?: By this I just mean, limit your answer to known sociology only. This is primarily a society question, and so technology-based, evolution-based or genetic-engineering-based answers are not preferred. Answers that use only sociology would score higher in this quality metric.

Note: Of course I take the point that technology and evolution are important for sociology, but such things should not be the defining characteristic of the answer

A peacock style of courtship.

So we have a society with a next to none hierarchical structure and where wealth distribution makes everyone almost equal. Also education and uprising is focused on making people cooperative, and see the celebrity status as empty and vain. A perfect progressive utopia.

But the same society has a peculiar way of people finding mates. Since exhibition of strength, wealth, and even popularity, is seen as primitive, males compete with each other in who is the most beautiful. And their standards of beauty are a bit different from ours. A male is considered beautiful if he's not only muscular, but also hairy all over the body, has characteristic exaggerated facial features, a musky smell, etc. In order to find a mate, males dress in ways which emphasize those traits, and use makeup to draw attention to their brows and noses. Special penis overlays, which would make them look bigger, are probably also in use. Think glam rock crossed with vikings. On the other hand, baldness is connected to large quantities of testosterone, so a male who can't boast a mane of hair may try to go in the other direction, shave the hair, and cover the skin in tattoos to draw attention to that.

If the premise is true(1), your answer probably lies in widespread competitive sport (and increasing the reproductive success of successful players), driving competition and positively selecting for higher testosterone levels.

Interestingly, according to this study you'd probably need to be pretty selective over which sports you promote (power-lifters, for instance, appear to have surprisingly low testosterone compared to other Olympic sports). It also stops short of mentioning whether the testosterone levels are higher or lower than average in each sport which isn't particularly helpful for us.

There's also an issue of whether the testosterone levels of athletes are causes of their success, or caused by their training regimens. I haven't yet been able to find a study for male athletes, but the key may lie in promoting female sport. This study suggests that naturally produced testosterone provides female athletes with a significant competitive edge, so you can use this to drive selection processes. The issue then becomes trying to get your testosterone-laden athletic women to outbreed the non-testosterone-laden general population which will be hard considering that they will likely be competing through their prime fertility years.

(1) The studies presented are probably enough to formulate a hypothesis for a study rather than suggest evidence, unless Cieri's study presents an average of human skeletal features both modern and ancestral or there are human follow-up studies to Brian Hare's suggestion.

I think you need to clarify what you mean by "peaceful". Do you simply mean that there is no war, or are you going to the extreme of eliminating all violent crime? Christian civilization figured out the answer to this problem somewhere between the fall of Rome and the High Middle Ages: chivalry. To adapt the perhaps overused metaphor, instead of turning wolves into sheep, we learned to turn wolves into sheepdogs. Channel all that male violence into fighting evil and protecting the weak rather than doing evil and victimizing the weak. And if you ever had a surplus of manly adventuresomeness, you might send them on a crusade to risk their lives for glory in a far-off land.

In your world, you need to think of opportunities to channel masculine strength, daring, and independence into productive avenues. Maybe you do away with police and fire departments so that every male citizen plays a regular role in fighting crime and rescuing people from natural disasters. Maybe you come up with a form of "crusade" that makes sense for your context. Maybe you bring back dueling or jousting. Or make it illegal for men to hold "jobs" so every man must start his own business. Or open up a new frontier (a warmer Antarctica maybe?) so that men who want to test themselves can pioneer there.

There's not one single answer to the question, but it obviously relies on a multitude of factors. Among them are the following:

The modern diet is radically different from that of the past, and several groups of food is known to contribute to hormone levels in the body. So dietary guidelines that enable production of testosterone is a good start.

In particular, fasting is shown to increase testosterone and growth hormones, and without reducing muscle mass. Comparably the modern day trend of constant snacking on empty carbs would counter this.

In northern countries, Vitamin D is added to milk in order to counter the lack of sunlight and the natural production. There is also no lack of other supplements in use, ranging from protein powder to Omega 3 fatty acids.

As such artificial means such as medication or supplements should not be excluded. It is not unreasonable to enforce a testosterone supplement to common food groups to combat decreasing testosterone levels.

When competitive Sports are established in your civilization, it could stop or lower the decline of Testosterone in the population. Not only the participants will produce Testosterone, but also the spectators which enables competitive sports to have an impact on a whole civilization. For example a Chariot Race, which is peaceful but dangerous. It requires alot of courage, fitness and assertiveness to win. This could apply to many other competitive sports Side note: Sports that are not team based would rank higher, as they don't require cooperation between the participants.

Make it fashionable for every man to be shaped like a sumo wrestler. They will have to eat like cattle AND go to the gym for lifting and gains. Sumo wrestler are fat but they are also muscular. Make synthetic testodterone legal and over the counter.

Also make sure that guns are banned and everybody has access to cheap or free fast internet. That way males will be just arguing on forums and insulting each other's moms instead of shooting each other in schools and cinemas.

Marijuana and lots of it.

Smoking marijuana depresses testosterone. That T is good for growing your big burly body but on a day to day basis. the gentle herb will keep people peaceable. It works best in the absence of alcohol. Something to consider for our society too.

I saw your answer earlier in the day, and I've been thinking about it all day.

First off, I'll give my answer. I would encourage you to challenge the belief (by finding sources, I don't believe there are many out there) that prove a strict correlation between violence and testosterone (for instance, check out this 2009 University of Munich peer reviewed article: https://www.sciencedaily.com/releases/2009/12/091208132241.htm) as well as this (seemingly less legitimate) article: https://www.psychologytoday.com/us/blog/attraction-evolved/201707/does-testosterone-really-just-make-men-aggressive .

So, to answer your question - males need to DO something. They need a goal and a reason to move and to pick things up and put them down. So their 'aggression' needs to be channeled. I would encourage you as part of your research to look up Jordan Peterson's research and discussion on the matter on YouTube.

As a second point, I would take some time to do research on these responses. Web sites like this (https://www.elitefitness.com/articles/pornography-impact-on-libido-testosterone-potency/) which are cited lack any professional references (or references at all) and THEY ARE SELLING SOMETHING.

As a final thought, I spent a while researching the claim that testosterone is higher in men with more facial hair and found that it did seem to be true - to a limited extent. To assume that a man with less hair, though, is somehow less dominant is surely a preposterous idea!

Simply put, the research is all over the place here. Just give the men something productive to DO.

The answer is actually pretty simple. Provide government subsidized testosterone supplementation along with ad campaigns for moderate usage and the attractiveness of muscular physiques.

We already have synthetic testosterone. It's quite reasonable to assume a fictional civilization has them as well. The benefits are easier gain of muscle mass, improved sex drive and emotional mood.

An idea taken from Traveller's Adventure 10: a social ritual requires an arduous journey with other couples to the "Valley of Memories" and back. The sophont species in the adventure lay eggs which are subsequently fertilized; children that are a product of the voyage are stronger and more likely to survive to adulthood. The voyage was instituted by the inhabitants of the only city on the planet, to simulate conditions of their nomadic past, to aid the survival of said city.

Not the answer you're looking for? Browse other questions tagged reality-check society evolution earth-like near-future .

10
How to justify evolution of a sapient hermaphrodite species
16
Why would the 'Church' be granted the exclusive right of producing alcohol?
2
Gender ratio in a three gender system
9
Why would the males of a species exhibit polymorphism?
3
Social Engineering: Modifying meritocracy and quantifying arrogance
7
Why would males exist in species with hermaphrodites?
0
Would simultaneous hermaphrodites wage war?
24
In what sequence should an advanced civilization teach technology to medieval society to maximize rate of adoption?
6
What would a matriarchal intelligent species look like?