The Galaxy has been colonised but why the big feet?

Far, far into the future, pretty much the entire Milky Way has been colonised by humans. The thing is that now the Empire has fallen, the technology of FTL travel has been lost in most places. Those who still have it are too busy fighting a war amongst themselves to be concerned with far-flung outposts.

Evolution has continued differently on different planets. Humans have evolved to fit the local conditions.

On the planet Schmell, there is a mutation that causes the human inhabitants all to have enormous feet while retaining pretty ordinary human proportions in every other respect.

Typically a six-foot male would have feet that are 2 ft (0.6 meters) in length.

What evolutionary or other pressures could plausibly cause this phenomenon and prevent it from dying out?

Their feet are roughly twice as wide as 'normal' feet as well as twice the length.

The planet has been terraformed and can be considered very similar to Earth in most respects.

With the fall of civilisation on Schmell, the people still have memories and artefacts of the past but they are reduced to a pre-industrial style of living.

While generally similar to Earth, Schmell's biosphere is mainly swampy. Its murky water is packed with organisms similar to phytoplankton, which humans harvest to fill dietary niches previously occupied by grains. There is also an abundance of zooplankton and many other larger species that dine on the phytoplankton.

Aquatic organisms are in such abundance in the nutrient-rich swamp that covers much of the planet that the water is more viscous than average. This confers an advantage to humans with slightly larger feet, who can swim better via biological swim fins. This selective pressure led to humans with much larger feet - thanks to Schmell's lower gravity, they can use the liquid's surface tension to run on water, similar to the way the "jesus lizard" can on Earth.

Schmell gets the snow. Man, does it get the snow. You think it snows where you live? You should see the snow in Schmell!

To walk around on all the deep, white, frozen precipitation, it helps to be able to distribute your weight over a large surface area, that is, to have big feet. Small-footed people sink into the snow and are unable to continue their journey to market. Then they starve and die, and are thus rendered unable to pass along their genes any more. It's sad really, but there you have it.

As usual, let's present some parallels to the Real World (TM). Critters that live in snow tend toward big feet. The Eurasian Lynx comes to mind, along with the Arctic Hare, the Snowy Owl, the Polar Bear, the Adelie Penguin, and Nordic tribes-folk who invented these clever things: 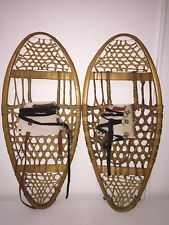 The first colonists to Schmell were extremely conservative, and covered their whole bodies with dense robes to prevent any of their proportions being seen by members of the opposite sex. Moreover, the terraformed plains of Schmell are pliable and perfect for walking barefoot -- the people of Schmell have no need for shoes, and for hygienic purposes tend to go without shoes.

Thus, the only visible feature on any citizen of Schmell is his or her feet, and so it is the only feature by which a person on Schmell may distinguish between physically fit or unfit mates. People with big feet have better balance on the broad planes. Strong, calloused feet indicate a hard-working person, and smooth hairless feet indicate an intellectual. And, well, you know what they say about guys with big feet.

So, big feet won out by natural selection. Nobody on Schmell wants to mate with someone who has small, useless baby-feet.

It could be only a case of genetic drift. When a small fraction of individuals remains far from the main population, a random genetic alteration could become common, even if it gives no advantage whatsoever (of course, it should also provide no disadvantage).
So, when the colony was small (maybe after the collapse of the Empire they had a crisis that left only a few hundreds people on the planet) one or two people had a random genetic alteration that gave them big feet. They transmitted this feature to their offspring (it is not a recessive feature), and in some generations, it became quite common.

Back before the empire collapsed, the citizen of Schmell were a cantankerous bunch. This was partly due to fact that the empire tended to dump off its undesirables and unrepentant political dissenters on the world and forget about them. Often times someone would say something foolish, tactless or offensive. This lead to many conflicts, some expanding into global confrontation. Except for one group on a remote island. They were known to be wise and enjoyed relaxing on the beach or engaging in coastal activities. They were also known for a rather peculiar abnormality - big feet. After a rather devastating war the survivors came looking for these islanders with big feet to help them rebuild and learn wisdom in dealing with each other and accepting or at least tolerating their differences. When asked their secret the islander elders nodded wisely before answering. We islanders have big feet - we have learned to think before opening our mouths. We were forced to learn the hard way that its painful to stick your foot in your mouth. We often hurt ourselves as much as our foolish words harmed others and we concluded it was not safe or wise to continue in such a way. The visiting group were amazed at such profound knowledge and thanking everyone then left the island. But as they learned nothing; they eventually exterminated themselves into extinction leaving the planet Schmell to be repopulated by the big feet islanders.

It could be some kind of food or fruit that have a side effect of making your feet bigger. It kind of tasted good so people still ate that. The first "big-footed" baby is born when the mother ate the fruit but the side effect not only affect her but her baby.

Not the answer you're looking for? Browse other questions tagged biology evolution anatomy terraforming .

6
Biological and ecological considerations for a giant worm
37
Colonizing the galaxy by slow boating reality check
6
Why would a big cat have black fur around its face?
44
Would a horse be sufficient buffer to prevent injury when falling from a great height?
5
How "young" can a non-aging person be and still function?
2
Reasonably tougher humans against falls, concussions etc
2
Viability of polycephalia, but the extra heads aren't intelligent?