So far, I've begun developing a food web for a swampy biome. Currently, the result of this free building is shown in the mess below (built = orange, aquatic = blue, producer = green, not built yet = grey). 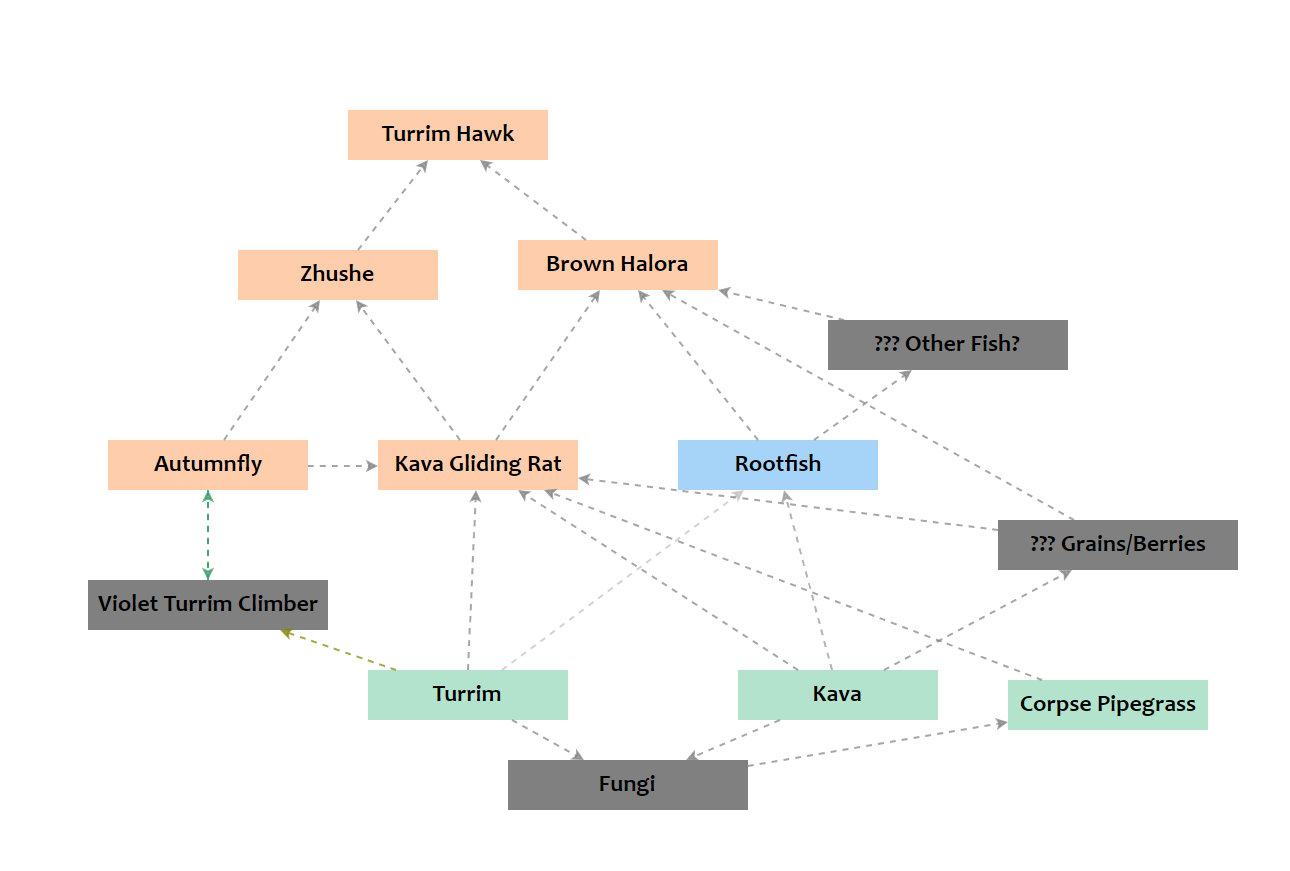 There are certain problems with this ecosystem:

How should I structure my worldbuilding, so that I can build a better food web? Are there any resources that I could consult?

The vast majority of every food web you have ever seen is only a tiny fraction of the real food web for that ecosystem. Most environments have a large number of species in their ecosystems, especially the further down the pyramid you go, you should have dozens of fish for instance, although it is perfectly fine for a few to dominate. A complete food web for any ecosystem is a densely packed interconnected mess, so unless you really want to you don't need to exhaustive. Also its not uncommon to just see something listed as (detritivores) or (marine invertebrates) listing every single species that makes up zooplankton for instance will be pointless for you.

One thing you should ask yourself is, "is my environment created by non-biological feature or some unique producer" examples of one created by a particular producer; mangrove swamps, grasslands, redwood forests, sargasso, coral reefs. Examples of ones created by something else; Fire-forests, flood plains, mountains, deserts, they are not mutually exclusive but it can help you frame your ecosystem in your mind. What foundation makes your ecosystem unique.

Grain and berries are also producers, they are plants.

insects and other detritivores will eat fungus ans well as most everything else. Many live off leaf litter. arthropods, shellfish, and fungi dominate on earth.

Keep in mind an animals growth cycle can effect what it eats, the young of an animal may eat something different than what it eats as an adult, young alligators eat primarily shellfish and insects while adults live off fish, birds, and mammals. So your Zhushe may be fine.

There are often many steps in the size of organisms, I don't know what size your hawks are but if they similar to earth hawks they are unlikely to be the only top predator. Most environments have something in the several hundred pound range. Large size helps conserve resources so some organisms will evolve towards it when possible.

If you look here, you can see that you need far more plants than animals that eat plants. Similarly, you need more small herbivores than carnivores, and on up the chain until you reach the apex predator.

Another good article on food webs can be found at the Khan Academy.
As a general rule, both of these indicate that each higher tier is about 10% of the tier below. So primary producers, like plants, with a population of 10,000 could support a primary consumer population of 1000.

For a freshwater swamp, the highest predators (other than humans), would be large birds, kanine species like wolves and foxes and reptiles like alligators.

You would need to also add everything at the microscopic level, Archea, Bacteria and Prostita.

You know Bacterias and Archeas represent the vast majority of life on earth right?

Not the answer you're looking for? Browse other questions tagged fauna flora worldbuilding-process ecology .

24
Creating a realistic world map - Vegetation/Biomes
9
Which kinds of food would no longer be available if plants stopped producing pollen?
6
Maximum realistic salinity level with thriving aquatic environment?
9
How would a community of people living in densely packed treehouses receive food to their treehouse?
9
Energy in a food web of robots
16
If a creature's best food source was 4,000 feet above it, and only rarely fell from that height, how would it evolve to eat that food?