In the future, rich people live in gated communities with armed guards. They are so concerned that anything bad will happen to their children that they literally wrap them up in cotton wool. 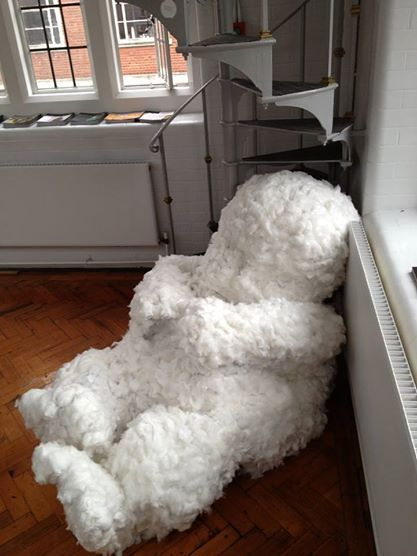 As generations go by, this spreads to adults as well. Eventually no-one ever leaves the community (which grows ever larger) and everybody is wrapped up in cotton wool. All surfaces are rubberised or covered in padding so that no-one can ever get physically hurt in any way. They do of course have servants who do all the difficult tasks but how do they perform practical things like personal hygiene?

What are the major challenges these people will face in everyday life. In particular personal hygiene?

Fire. Cotton wool is extremely flammable unless treated. If treated the chemicals themselves are toxic.

Cotton wool would need to be laundered or changed frequently or it will harbor a large number of pests, and since it traps moisture it will be a breeding ground for microbes, and mold.

Development issues. Children not let out of the house will develop muscular/skeletal issues, since without running around and jumping and falling, bones will be weak. Childhood obesity will be rampant without exercise. Children's eyesight will never develop properly and most if not all children will be nearsighted.

The question has now been edited such that this answer is largly irrelevant, I leave it here as a testiment to a closed time loop.

Being born and dying are the two most traumatic events that a human can undergo.

Reductio ad perfectum all humans should come into being in an dedicated super-womb caring for their every need and shielding them from any possible harm. Death has been outlawed.

Of course, education would be prohibited as the boredom that some might experience could lead to resentment and negative thinking - a form of emotional violence directed against self or others. Of course it might just be best if the individual were not aware of others at all, as this also causes all sorts of annoyance, jealousies, anger and general angst - all emotional-violence and utterly forbidden.

Entertainment would be individualised. A stimulus fed to a neonate (if such a term is applicable), would produce a reaction, closely monitored by learning machines that would apply the most sophisticated heuristics to ensure that the individual had all to please it, and had all negative emotions screened out. The individual would have no need for language or abstract thought or desire or guilt or concepts of love and pain, death and attachment.

All art, science, culture society and history would cease to exist. The machines would tend the great vats of people for thousands of generations - there being no evolutionary pressure to adapt, all mutations that could survive would. The most grotesque monstrosities could be seen floating in their amniotic soup in their mindless artificial dream.

Humanity as we know it would cease, and all that could be heard would be the whining of the life suppport, and the clicking of the mecca in their eternal pointless dance.

The surface of the Earth would become increasingly covered, layer upon layer of the new on the old, till the centre became utterly hollow - and the machines would have no choice but to expand the growth off planet.

This naturally leads to war against other civilisations that either the machines will win - and expand, or lose and ultimatley the travesties of life that was once humanity would finaly be at rest.

So, in answer to your question, the challenges can be ultimatley overcome by utter anihilation of themselves or by conquering the whole universe by proxy and continuing to expand 'till the end.

I don't know about you, but if I was wrapped in that thing, I'd suffocate.

It's a slipping hazard. It would be worse than ice, actually, because the material would stick to the floor, and you would slide inside it, until there wasn't enough material left to keep sliding.

I don't know if this is an outright danger, but the smell would become horrible from sweating and other stray bodily wastes building up and not being properly cleaned off that.

Not the answer you're looking for? Browse other questions tagged society humans protection or ask your own question.

14
How would society be different if humans possesed natural fur covering?
8
What might today's society look like without (addictive) social media?
3
Society of conspiracy
4
Society of Kind, Handsome Geniuses = Dystopia?
3
How can I combat the laziness of the final generation in human society?