Is my fantasy map unrealistic and/or too small?

I've finally drawn out a map of the world in which my fantasy novel (mostly) is set in hopes of creating more countries and deepening political tension between the existing ones through figuring out borders, trade routes etc. But having done that, I feel that it is too small and/or unrealistic. Now I know that the map not finished yet and is merely a layout, but I want to make changes as early as possible.

Any help or opinion would be greatly appreciated! :)

P.S. Details: I feel that the map is too small because of how it looks compared to other fantasy worlds and even our own. Politics look good on a larger scope and I'm worried that this map doesn't convey that - it looks like a fragment, but is meant to be all there is in the populated world. The planet having such a small landmass feels slightly unrealistic, as well, especially if competed to the huge (maybe seemingly so) continents in some other works of the genre. 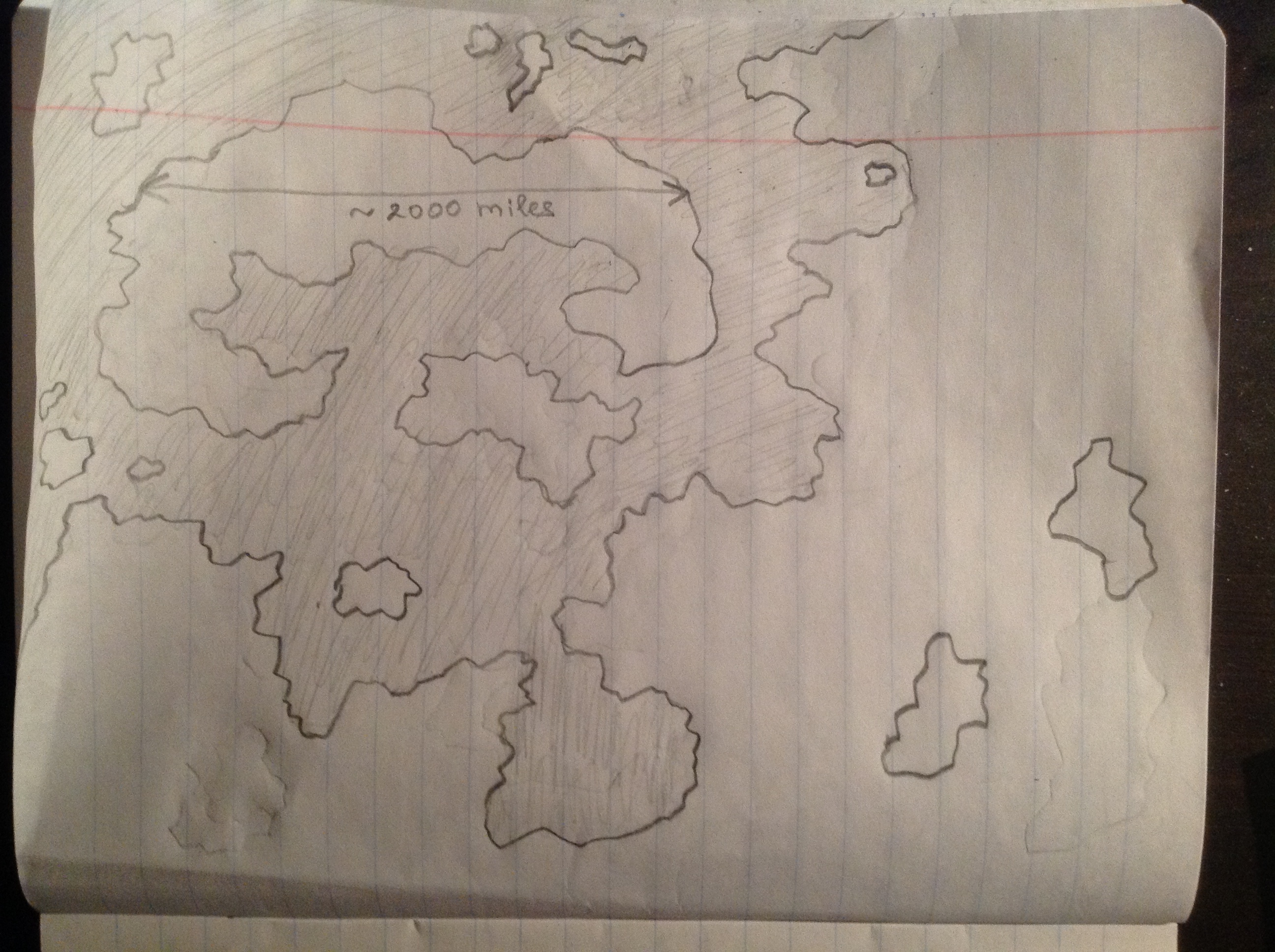 Sorry I couldn't upload the gif -- too big! So I made a series of stills, 45deg apart & rotating Earthwise.

First of all, I don't think your land masses (the plain / white areas) look bad. I mean, if you look at maps of early Earth, you see all kinds of wacky land masses. So, image 1 looks pretty good, actually!

First issue: Way too much land! As you rotate around, the first thing you'll notice is that you've got about 60 to 70% land. You have one medium sized continent and one small continent in a land-locked ocean-sea. This may or may not be intentional! But it is something I want to draw to your attention, as I think this will screw with global climate and weather patterns.

Second Issue: You didn't give me a complete map! If you look on maps 2 and 3, you'll notice a large, dark rift. No, that's not a geological feature your world's Chris Columbus will nosedive into! That's the dark smudge at the left edge of your paper. To the west of that dark chasm is the right edge of your map, which has no coastline! You'll either have to draw a coastline somewhere along the right side of your map, or else add paper and draw a bigger map!

Third Issue: You gave me the wonkiest scale you could possibly do! Your "2000 mi line" is at approximately 55deg north. Earth is about 40075km in circumference at the equator. I plugged some numbers into calculators for determining circle diameter at a given latitude:

At the same latitude, your world is approximately 4100 miles or so (there's about 20deg of longitude error (4000 mi plus whatever distance is equal to 20 deg.))

The circumference of your world at that same latitude is only 6598.31km, so your whole planet is indeed quite small!

Conclusions: Your world is (probably) nòt unrealistic, but its land to water ratio is something you'll have to explore on your own. I've seen "wet Mars" maps that look pretty much like your world: a lot of land, very little sea.

According to your scale, it is small. Whether it is too small, or too big or just right, of course, is going to be up to you!

Suggestions: First thing! Next time you draw a world map, please just put your scale at the equator!! I'm not a maths whiz and using those calculators pretty much caused my brain to crash. Second, if you want a bigger world, you have two options: first, draw more world!; second, multiply that "2000 mile" line by a factor of 2. I thìnk that will give you an Earth sized planet on the cheap. Third, fix the western coastline of the World Sea.

11
Underground Terrain Types / Biomes / Agriculture
22
Is my world map unrealistic?
6
Deciding between two methods of keeping people from using technology in combat in my urban fantasy setting
1
How plausible are the terrain and land-forms on my fantasy map?
50
The magical map - how to stop it being too powerful
3
Where would rivers and lakes make sense on this continent?
8
Are the rivers in my fantasy map accurate?