How to keep a country rigorous when not at war? [closed]

I'm trying to create a world that has a strong military and good citizenship even in times of peace. I'm kind of stuck at the moment, but I have done some research already, so here is a brief case study I have been putting together. I used evidence from a world called: "Earth."

War should be the only study of a prince. He should consider peace only as a breathing-time, which gives him leisure to contrive, and furnishes as ability to execute, military plans.

Machiavelli puts it so eloquently that it sounds self-evident. However, Joe Klein, a political columnist of Time Magazine, submits that even a country as economically developed and militarily powerful as the US actually falls short of the mark:

Since WWII, yes we have had some problems, but [America] has not had any existential wars in which all of our young people have to go out and fight. In the interim, I think that we have lost a lot of the habits of citizenship. In contrast to the men and women in the military, we do not feel as if we are part of something that is larger than ourselves. We have re-tribalized our society.

What is good citizenship?

Notably, in the post-Vietnam era, it has become fashionable to be skeptic of the government. Hollywood often portrays government or deep-state villains. There is an anti-establishment vibe that pervades everywhere from off-shore banking on wall street to the Malthusian moral hazards of exploiting welfare.

If America fails to keep society from being fragmented and tribalized, as per the earlier definition of "good citizenship", how can a fictional state that is similar to America learn from any potential mistakes and do better? Or would any such state be doomed to fail to stay "rigorous" in times of peace? Why or why not?

The problem with the Machiavellian point of view in the modern world is that it was stated in a feudal environment, where it was the role of the serf to defend the state under the leadership of the lord when directed to do so. In all other cases, the serf had domestic duties (farming, smithing, pottery, etc.) that promoted the prosperity of the state instead of the security of the state. In such a world, waging war isn't anywhere near as expensive as it is when you have a standing professional army and the far more sophisticated engines of war such as drones, tanks, aircraft (and their carriers), to name just a few.

In a modern state, war is expensive and only the richest countries can afford to supply their defence forces with all the engines of war that exist; most nations pick and choose according to a strict set of priorities which weapons give them the best chance of defending themselves, based on their strategic geography, resources, and command tactics.

The defence of the state works as a motivator and uniting force within a country because of the sense of purpose that it generates. It makes things clear in the mind of the people. We know who the enemy is. We know what we must do to protect ourselves and defeat that enemy. Black and white, good and bad; there's no room for grey in the country if it wants to survive.

You actually see the same thing happening in countries where massive natural disasters have occurred. Australians (and Americans) all rally behind their firefighters when those terrible firestorms happen over summer. I've seen Australians unite behind their farmers in times of great drought, and in many Asian countries people just pull together when tsunamis, earthquakes and other disasters strike. Even the rescue of the miners in Chile several years back generated some sense of national purpose and to a lesser degree, pride.

I'm not suggesting that in order to keep your people invested in the state you need to have a good old-fashioned natural disaster once every 18 months, but the examples above do show that it's not all about the power of war to unite, it's the sense of purpose underlying it that really counts.

So the real question becomes; How do you maintain the sense of purpose without existential threats?

Arguably, the most compelling case of a positive sense of purpose being generated in recent history was the Apollo missions out of the USA. Forget the reasons why it was done; that's not as important as the fact that it was a chance to focus the nation on something that was going to drive scientific learning and engineering know-how for at least one more generation after it was done. The tax increases were significant for the average American at the time to do it, but everyone did it just the same. The sense of purpose behind doing it was there and once it was done, the USA could justifiably lead the world celebrations in achieving it.

After it was achieved though, the need to keep doing it seemed to collapse.

The point being, people will find it easier to invest their time, energy and hearts in the state if they have a reason to do so; a sense of purpose that they can't achieve by themselves and if they see the benefit to themselves as a member of that state in doing so. Making these goals sustainable over a long period; that's the real trick.

To summarise, I think that war is probably one of the worst reasons behind which a nation unites, especially wars of conquest, like those of Rome back in the day. Disasters should be minimised, but when they do occur they provide incentive for the people to get behind their nation and support their fellow citizens however they can.

Ideally, have a series of goals lined up that the people can get behind that generate a sense of pride within the citizenry. Don't make the cost prohibitive, but make them impressive enough that people don't get distracted with daily squabbles in order to achieve them.

There are enough examples out there. So long as your populace can see the benefit to being a part of a nation that does this grand thing, you'll find that material and emotional investment in the state will increase. Just make sure that you don't overwork them in the process, that they have enough to feed their families and keep them in good health, and the focus will stay on what you put in front of them if you're a good enough leader.

The Italian term fascismo is derived from fascio meaning a bundle of rods, ultimately from the Latin word fasces. The symbolism of the fasces suggested strength through unity: a single rod is easily broken, while the bundle is difficult to break. (Wikipedia)

The bundle of rods with a embedded axe head symbolized a Roman magistrate's imperium, the power to command. It was widely used symbolically, from France to the U.S.A., to denote strength through unity. The (oficious) national emblem of France uses it to this day.

"Fascism is for the only liberty which can be a serious thing, the liberty of the state and of the individual in the state. Therefore for the fascist, everything is in the state, and no human or spiritual thing exists, or has any sort of value, outside the state. In this sense fascism is totalitarian, and the fascist state which is the synthesis and unity of every value, interprets, develops and strengthens the entire life of the people."

Benito Mussolini and Giovanni Gentile, The Doctrine of Fascism (1932), as quoted by Wikipedia.

The fascist organization of the state was supported by heavy use of propaganda, directed by a specially constituted Ministry of Popular Culture (comparable with the Reich Ministry of Public Enlightenment and Propaganda in National-Socialst Germany). 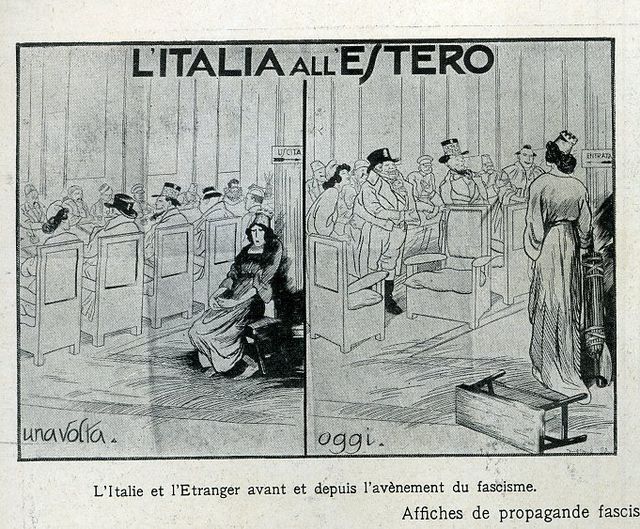 Italian Fascist propaganda cartoon. Title: Italy [as seen] abroad. Left, labelled "some time ago": Italy shown as a woman dressed in rags and barefoot, sitting alone while the foreigners discuss a the table ignoring her. Right, labelled "today": Italy shown as a richly dressed woman with the Fascist bundle of rods ("fasces"), while the foreigners turn to salute her. Published in the French news magazine L'Illustration in 1924. Public domain. Available on Wikimedia.

Fascist propagnda made heavy use of militaristic images, with ordinary economic issues being presented in a heroic and miliaristic fashion ("Battle of the Wheat"). Fascist propaganda emphasized the importance of political myths, which *"were true not as empirical facts, but as ‘metareality’" (Wikipedia, quoting Stanley G. Payne, A History of Fascism, 1914–1945, 1996). (Compare with the modern "post-truth" social environment.)

Fascists opposed both international socialism and free market capitalism, arguing that their views represented a third position. They claimed to provide a realistic economic alternative that was neither laissez-faire capitalism nor communism. They favored corporatism and class collaboration, believing that the existence of inequality and social hierarchy was beneficial (contrary to the views of socialists), while also arguing that the state had a role in mediating relations between classes (contrary to the views of liberal capitalists). (Wikipedia, quoting Calvin B. Hoover, "The Paths of Economic Change: Contrasting Tendencies in the Modern World", 1935.)

In most cases, fascists discouraged or banned foreign trade, supporting protectionism. Fascists believed that too much international trade would make the national economy dependent on international capital and therefore vulnerable to international economic sanctions. Under Fascist leadership, Italy embarked on massive public works programs, such as the draining of the Pontine Marshes, hydroelectricity development, railway improvement and rearmament. A special state organization, the Institute for Industrial Reconstruction was set up to rescue, restructure and finance banks and private companies. (Italy kept it operating after the war; it was dissolved in 2002.)

Not the answer you're looking for? Browse other questions tagged warfare earth-like government or ask your own question.

8
How can a dynasty of immortals be overthrown?
3
How might a Government subdue a rebellious state without armed conflict?
3
global government will improve life on earth by reducing arms budget and spreading peace?
3
Could organised crime gangs have ever usurped government in the United States of America?
6
How to regulate the expected result of fights between hired mercenaries?