How long would it take a body to decay and the bones to fall to the ground from a tree?

Death occurs in extremely high humidity and an average temperature of 23 C (~75 F), both of which continue for six weeks.

At that time, temperature begins to fall over the course of eight weeks to an average of 5 C (~40 F). At the beginning of these weeks humidity decreases sharply, though the air is still quite humid.

The next three months are cold, averaging 0 C (32 F) and with moderate levels of humidity.

This is followed by eight weeks of warming and then a hot, humid summer of two months with temperatures as high as 40 C (~105 F).

A dry season follows for six weeks and then the cycle repeats.

All this time the body is clothed (clothing composed primarily of cotton), open to the environment and can be accessed by insects and scavengers.

In this weather cycle, about how long would it take for the body to be skeletonized?

Also, how long would it take for the bones to separate from each other and fall from the tree assuming it starts securely wedged between two branches?

Probably not too long. There are a number of variables and it is necessary to know the precise trajectory of those conditions to exactly determine the actual decomposition.

The speed at which decomposition occurs varies greatly. Factors such as temperature, humidity, and the season of death all determine how fast a fresh body will skeletonize or mummify. A basic guide for the effect of environment on decomposition is given as Casper's Law (or Ratio): if all other factors are equal, then, when there is free access of air a body decomposes twice as fast than if immersed in water and eight times faster than if buried in earth. Ultimately, the rate of bacterial decomposition acting on the tissue will depend upon the temperature of the surroundings. Colder temperatures decrease the rate of decomposition while warmer temperatures increase it. A dry body will not decompose efficiently. Moisture helps the growth of microorganisms that decompose the organic matter, but too much moisture could lead to anaerobic conditions slowing down the decomposition process.

At a guesstimate the body will have completed its major decomposition during the initial six weeks of high temperature and humidity. The time for it to be reduced to a skeleton may take longer. A hot humid summer will go a long way to finishing this part of the process.

While the question mentions weather conditions, the role of scavengers and insects will also play a major role, these factors are lightly touched on in the question.

The probable sequence of decomposition would major decomposition during the first six weeks. During the cooling period, decomposition will continue for the eight weeks. The cold three months will slow down decomposition. The eight week warming phase should almost complete the decomposition and once the hot humid summer arrives the body is likely to be reduced to a skeleton. Insects and scavengers will obviously accelerate this process.

In fact, in an environment with high numbers of scavengers and insect infestations this could greatly facilitate the decomposition and result in a skeleton much earlier.

These are very ball park estimates.

It won't last a week.

You are basically providing an ideal environment for normal decay. It takes less than 7 days for insects (mostly maggots) to basically skeletonize a human body (not counting some stringy bits), with the presence of larger scavengers it is unlikely to last even that long. On a normal tree it is unlikely to still be on the tree within a day or two, scavengers even insects can move a body around a lot, as will bloat and rigor. Without knowing the exact environment and wildlife it is hard to say exactly , but in a warm humid environment bodies do not last long. 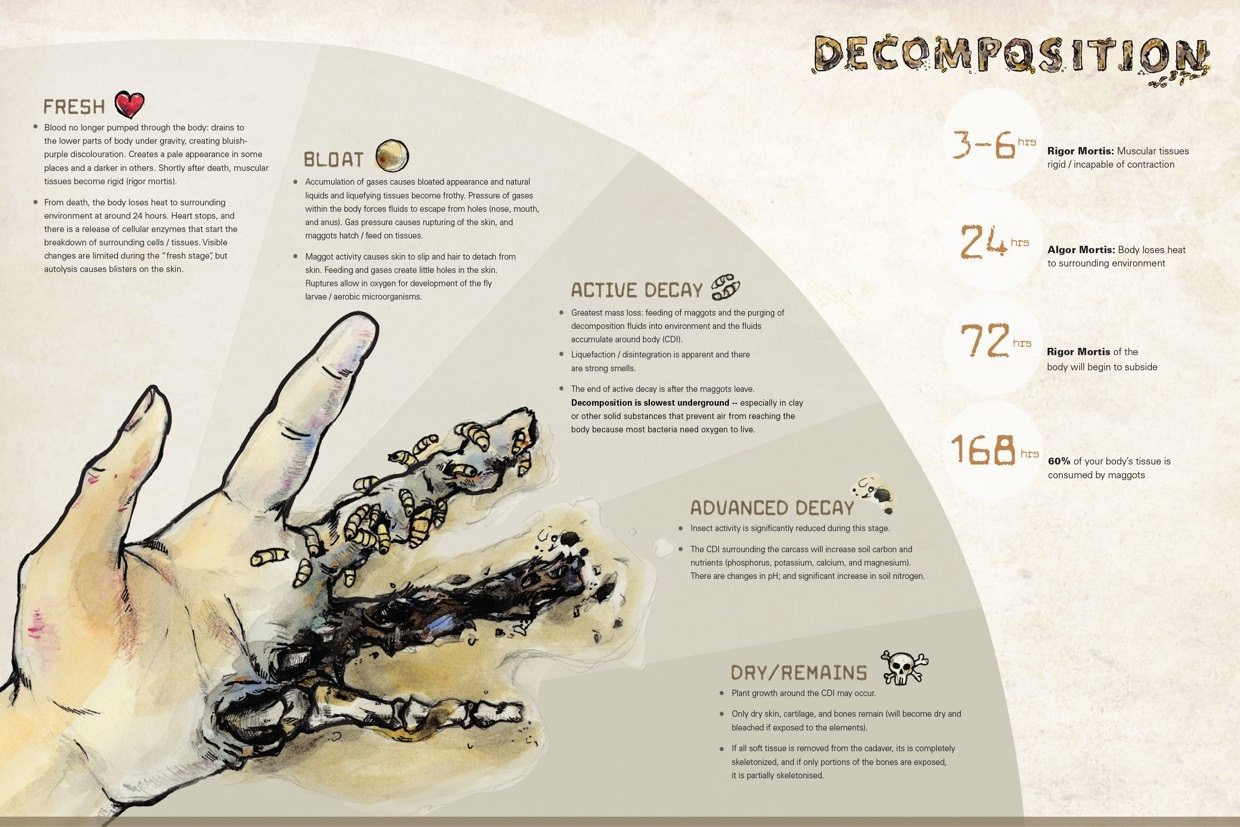 People sometimes climb up into trees and kill themselves. I remember reading about one such that winter hikers spotted. The body had been up there for years. I could not find that one again but here are others.

Her body was up in the tree for 2 weeks. It was a populated area and people smelled it.

This body was in the tree for three years. In a park!

This body was a skeleton, found after 29 years.

Summary - if you want it to fall out after 3 days, fine. But decomposition is a lot slower up off the ground. Ants, worms and beetles access the body from the ground and a body on the ground will also stay moist which facilitates decomposition. Coyotes, armadillos and the like will not be able to get a body in a tree and depending how deep in the branches it is, vultures might not either. It is those big animals that pull a corpse apart.

What is left is insects and they will leave the skeleton intact. In your scenario, I suspect fly maggots will eliminate the soft parts while it is summer; that will also eliminate much of the ability of the corpse to hang on to moisture. Once the weather cools the insects die off and then what is left will desiccate in the dry cool winter. The desiccated sinews and muscles will hold the skeleton together and are not very attractive to scavengers. If you need it to stay up there lodged in the branches for decades, that can happen.

Europe used the gibbet as a deterrent for various crimes, generally those which opposed the state or religious authority. Depending on how firmly your body is wedged in the tree, this may give a useful parallel with plenty of documented evidence.

Most of central and northern Europe will fall below zero in winter, and will not normally be so hot in summer. Still, it is worth noting one example of gibbetting where the remains of the body survived in its cage for 6 years. Most likely it would have been fully skeletonised by then, of course.

There are also a large number of cases of slaves and pirates gibbetted in the Caribbean, and these are more likely to be comparable to your temperatures. I don't have the time to research these, but I'm sure you can find some fairly easily.

As Sledge remembers: “It was gruesome to see the stages of decay proceed from just killed, to bloated, to maggot-infested rotting, to partially exposed bones — like some biological clock marking the inexorable passage of time.” – artofmanliness.com On the 70th Anniversary of VJ Day, Eugene B. Sledge Puts Your First World Problems Into Perspective

My grandfather was only on Peleliu for two weeks before his amphtrack broke, and was from there after a stretcher bearer until he was wounded. He had similar anecdotes about 'explosive decomposition'.

That would bring the duration down to about eight weeks; your temperatures allow for six. I deem it extremely implausible that they would be, a) still in a tree, and b) recognizable.

Not the answer you're looking for? Browse other questions tagged science-based chemistry death skeletons bones .

11
How long would the hell of reincarnation last?
4
How long does it take bones to decay? Above Ground, Inside, Humid Environment
42
How long would it take until we realise that people stopped dying from natural causes?
4
How much metal could a humanoid safely have in its skin and bones and be functional?
5
How long does it take for biological matter to decay in space?
6
How long would a creature the size of an argentinosaurus' bones last in a scrubland?
11
What would be the condition of a wood cottage that has been abandoned for ~20 years?
14
How would a society like Europe in the 11th century clean bones for burial?