What practical forms can a "branch-tailed" organism have?

So, I made the slight mistake of worldbuilding by starting off with just a planet's local sentient species and working from there.

This species, the Trillek, have a more or less theropod appearance with some minor anatomical differences, the most jarring being a prehensile tail with two additional opposable appendages that can form a hand.

Initially, this was just going to be a trait unique to their immediate order, the appendages something like fleshy tentacles, but I've started bumping the trait even further back, potentially as bony limbs.

It made sense for the Trillek, needing high prehensility for their dense jungle origins. But I have a hard time making this feature make sense in other animals.

I drew up two basal lizard-form, one with a hand-tail and one with the appendages forming a new set of legs, making it a hexapod.

One useful form I made for the tail-appendages was also a pterosaur-like hexapedal configuration: they form landing legs in place of the main legs, which function as a massive soaring wing, and the forelegs potentially functioning as a flapping wing.

For the terrestrial herbivores, I'm afraid I've had a lapse in creativity. I've gone for standard quadrupedal herbivore shapes, but with more substantial tails that are good muscle attachments to the legs. The appendages on the larger animal I made has solidified into horn, and the appendages on the smaller one form part of a membrane that runs from the tail tip, to the ends of the tailbranch, to the base of the tail as a signalling mechanism.

Other than that, I have trouble figuring out why this part of anatomy would be kept beyond its basal function for grabbing a hold of branches or tunnel walls. Should I go back to having it be unique to one order? Or potentially just make everything a hexapod and the tail-branches vestigial rear limbs? Or are there ways I can actually make this work in a general sense?

More to the point, I'm trying to figure out if tail appendages are useful and versatile enough that they can appear in a wide variety of species, if not be a standard trait for all the planet's vertebrates.

Here are some sketches for the general concept: 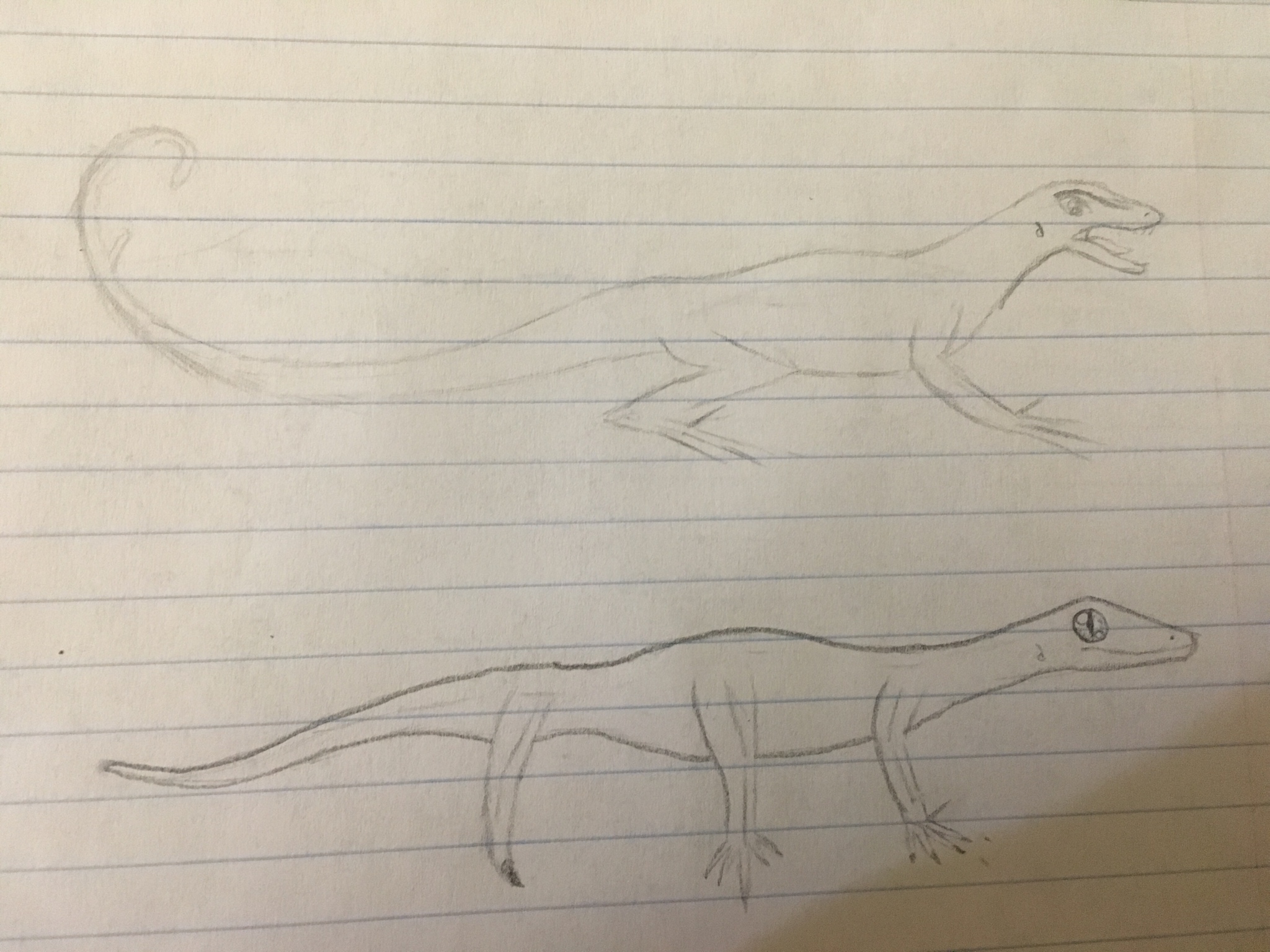 Basal conceptuals. Top is a basic lizzurr with a grasping branchtail. Probably works okay for climbing. Wrestling competitors. Mating? Maybe. Doesn't like having his picture drawn.

Bottom: Hexagekko. Branch tail makes a primitive extra limb pair. Why? Well, maybe you just need some extra spring in your step. Or an anchor point. 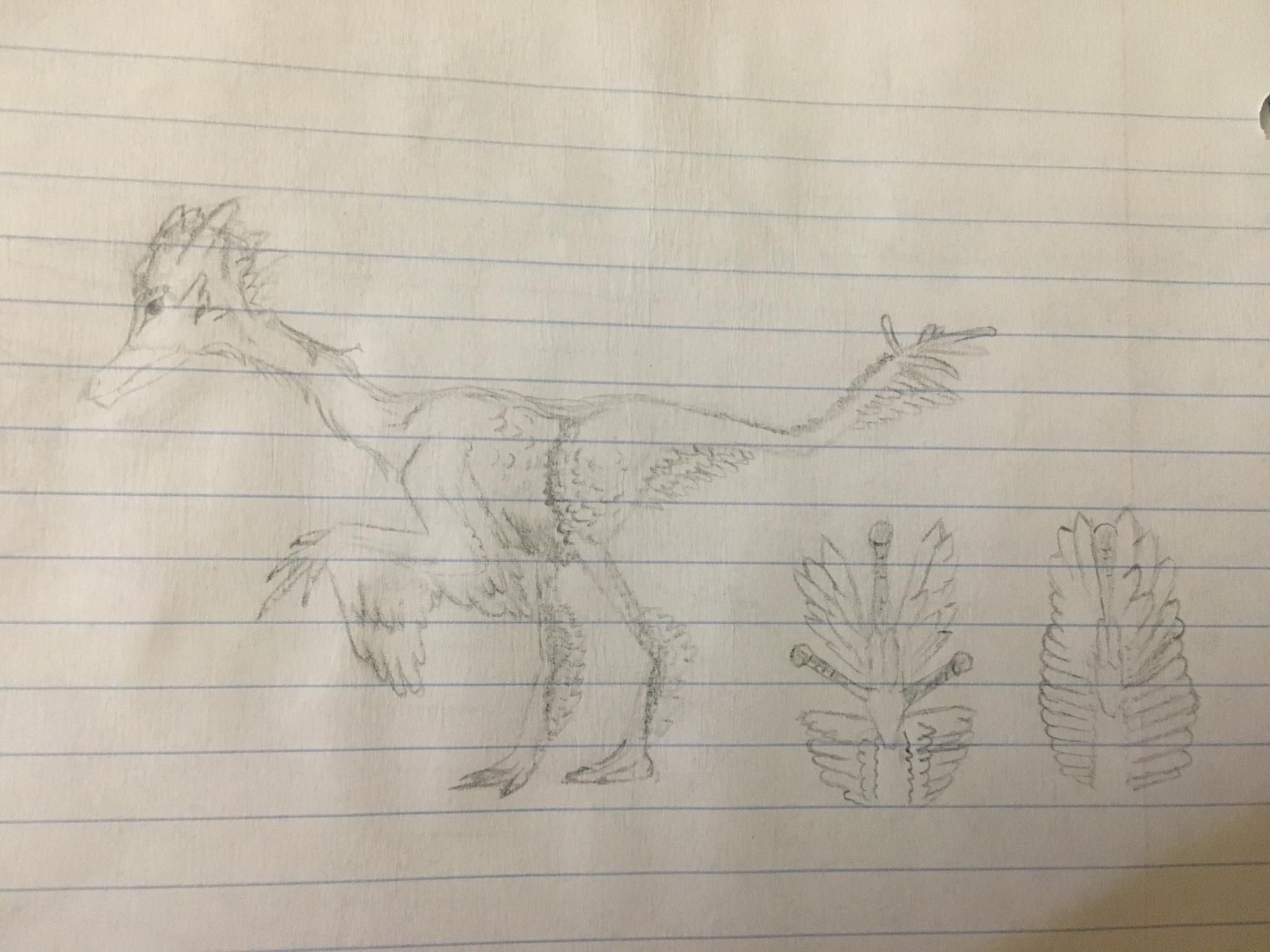 Trillek, the dinosauroid boogers whose anatomy has accidentally thrown me into a loop.

Bottom right is the well-developed tail-hand. The feathers can open up to allow for the appendages to curl (up or down!) or close to form a display fan. Provocative. 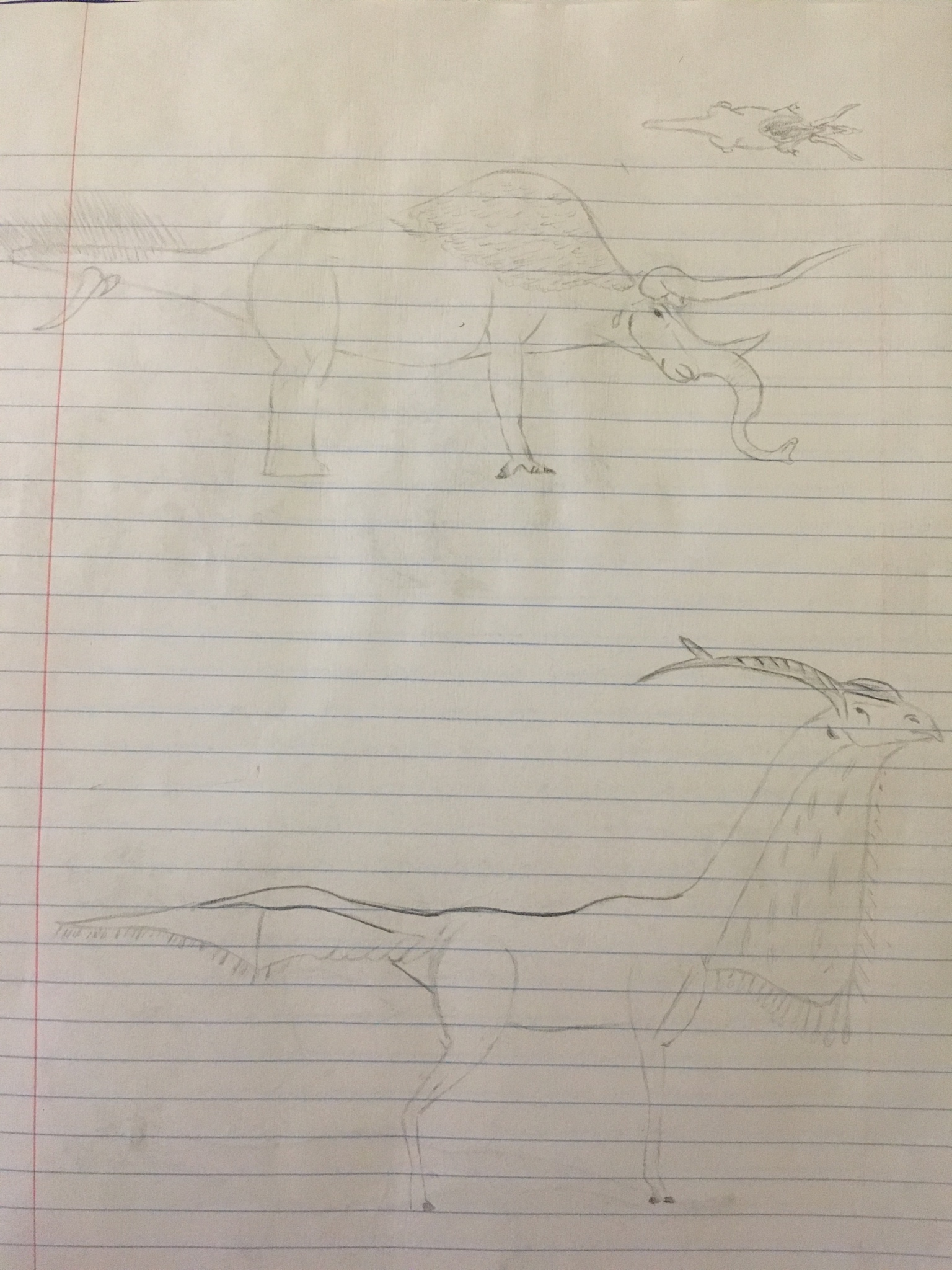 Beastie Boys from the cave painting. Dewlap antelope's branchtail can move the attached membrane up, down, or fold shut to communicate. Could also work as a radiator?

Tricerobuffalant's tail branches, however, are covered in horn and immobile :( 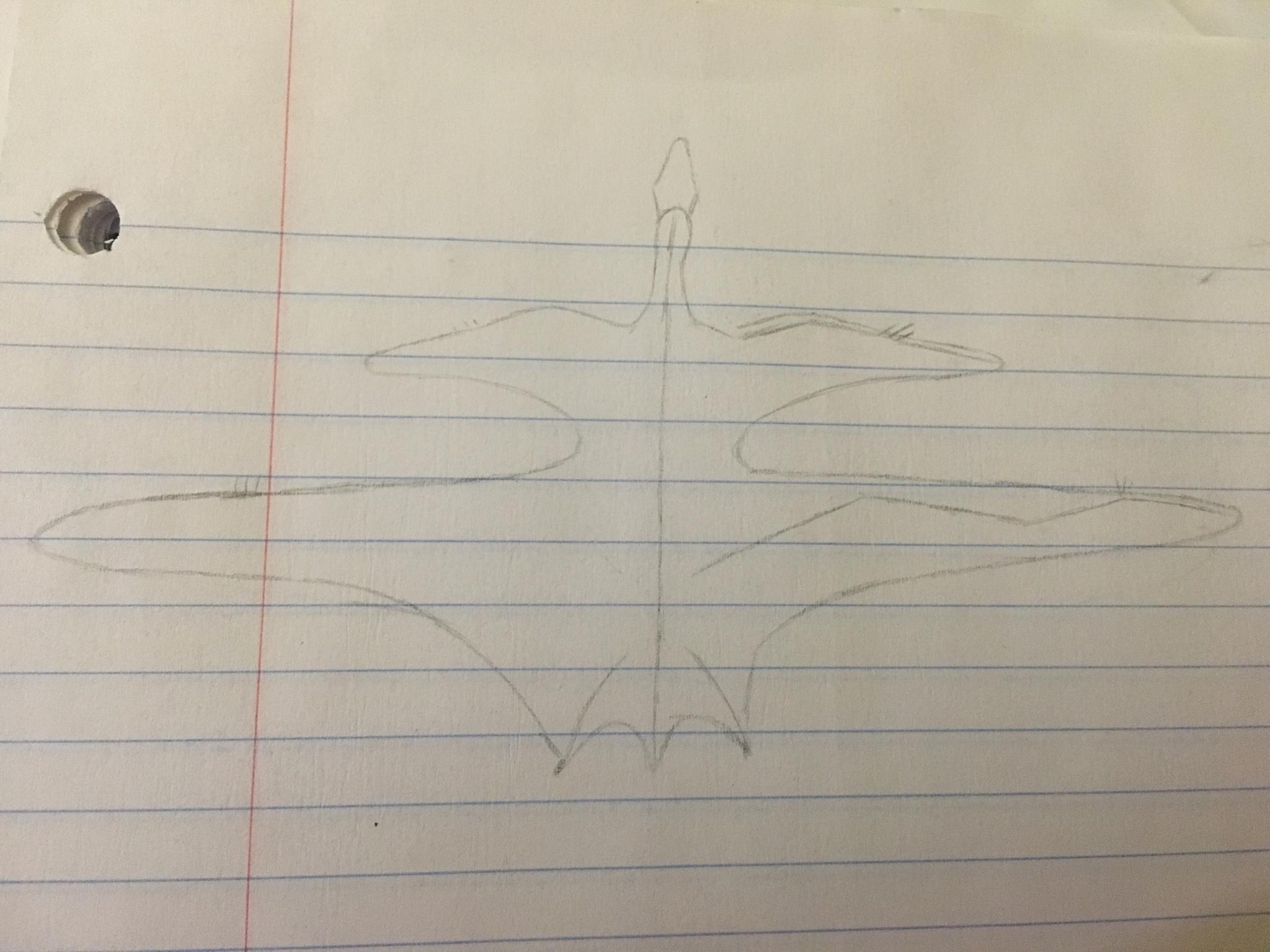 Some of the uses a water-dwelling ancestor could have for such a tail:

To answer your question regarding the usefulness and versatility of tail appendages,I will give a few examples. They can act as hands for gripping,aiding mobility for arboreal creatures,aid in balance,act as a safety net when climbing,can be used for tool manipulation (think of the damage they could do with a blade using their body as a pivot point). More muscular varieties could act as an extra leg or to help propel the creatures forward; they can also be used similarly to an elephants trunk,used to hurl projectiles,be equipped with sharp spines to act as a sort of gripping mace (smash it into the target,does them with venom,the backside of the tail has bony plating to protect it from the creature trying to dislodge it).

In short this could be a very useful adaptation,especially in creatures which originally had prehensile tails. It also can grant winged creatures a means of roosting upside down and the tail can be stuck inside of narrow gaps (into tree trunks,crevasses,holes) to search/reach for food. All in all I say this is a good idea.

As for whether this would be common everywhere well.... Really that is up to you. Parallel evolution is not that uncommon in real-life;and in a highly competitive environment (or one where a few common ancestral species diversified into the current ones following an extinction event) many creatures would develop shared traits related to obtaining food sources. If the common ancestral species had hand tails,then the descendants probably have them but for very different reasons barring them losing their usefulness.

Take a look at the following diagram from Wikipedia, which outlines the interbreeding and genetic mixing of different 'human' species over time: 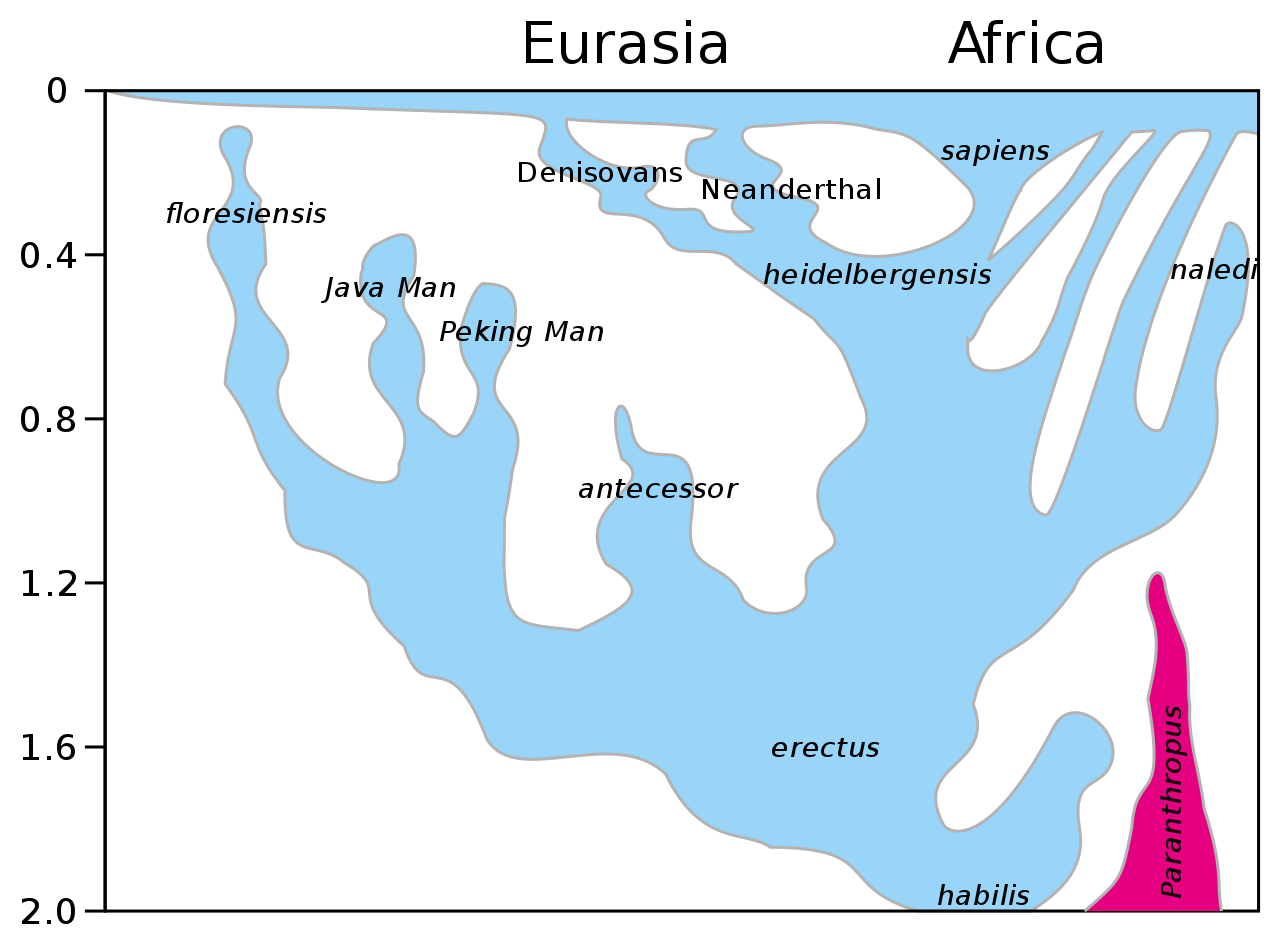 Now ask yourself this - why did Denisovans, Neanderthals and Homo Sapiens look so similar? Why did they have such common traits; enough that they could actually interbreed?

The answer is that they had a common ancestor (namely Heidelbergensis). This meant they came from the same genetic source and as such, had a lot of overlap between each other.

How is this relevant?

I think instead of worrying about why all the species on your planet have the same type of tail, you can just think about why one of them did - the common ancestor. If the common ancestor between a lot of these large vertebrates had this prehensile tail, it makes sense that unless there was a good reason not to have it, its ancestors should also have it.

While I'm not sure what environmental pressures would cause selection for those types of tails (aside from the reasons you outlined already), I think that you could use the idea of an ancestral species passing on traits widely in order to narrow it down. That way you don't have to justify it for all species, instead just for one or two

Not the answer you're looking for? Browse other questions tagged creature-design science-fiction evolution anatomy .

10
Alien Griffin Design
8
Can a feathered wing be also compliant?
7
Anthropomorphic flying squirrel, gliding capability
2
Wings going from locomotive purposes in juveniles to sexual purposes in adults, plausible?
6
Bee-like vertebrate flight surface
5
Dragon with pseudo-wings, is this viable?
3
Could the Classic Wyvern exist as a Tetrapod?
1
Might this animal be able to fly?
3
Anatomically Correct Winged Scarab
7
Expected limits of adapting wings for burrowing