Why would a drider lay only a small clutch of eggs?

In a very soft-science world, in a lush forest far away from civilization and their laws, especially the one about squares and cubes, lives a young, female drider. One day, while hunting for dire-boar at the far end of her territory, she meets a handsome young male of her species. He proves to be witty and charming, as well as a hunter almost as good as she is. Together they spend the evening having a feast, which turns into a night of romance. Not too much later she finds that her appetite is increasing and her abdomen feels strangely full... There's only one conclusion - she's pregnant!

This character's world is decidedly soft on science. There is a lot of magic that works just because it would be fun if it did. However, for our spider heroine I'm trying to stick very close to the feel of her being a spider, only scaled up. For example, if she goes too deeply underwater her spider body's book lungs will not work. Since her human lungs do not provide enough oxygen on their own she'll grow short of breath and eventually drown if she doesn't get out. Her legs also work using the hydrostatic pressure of her 'blood', meaning she has to rest every so often to rebuild pressure. She also needs to capture big prey to satisfy the enormous energy requirements of her metabolism.

In case it is relevant, her spider body is based on the Antilles pinktoe tarantula. She is also a young and healthy individual, living a lone hunter-gatherer lifestyle.

A drider is essentially a spider with a human torso in place of the head. They are sometimes known as 'spider-taurs'. 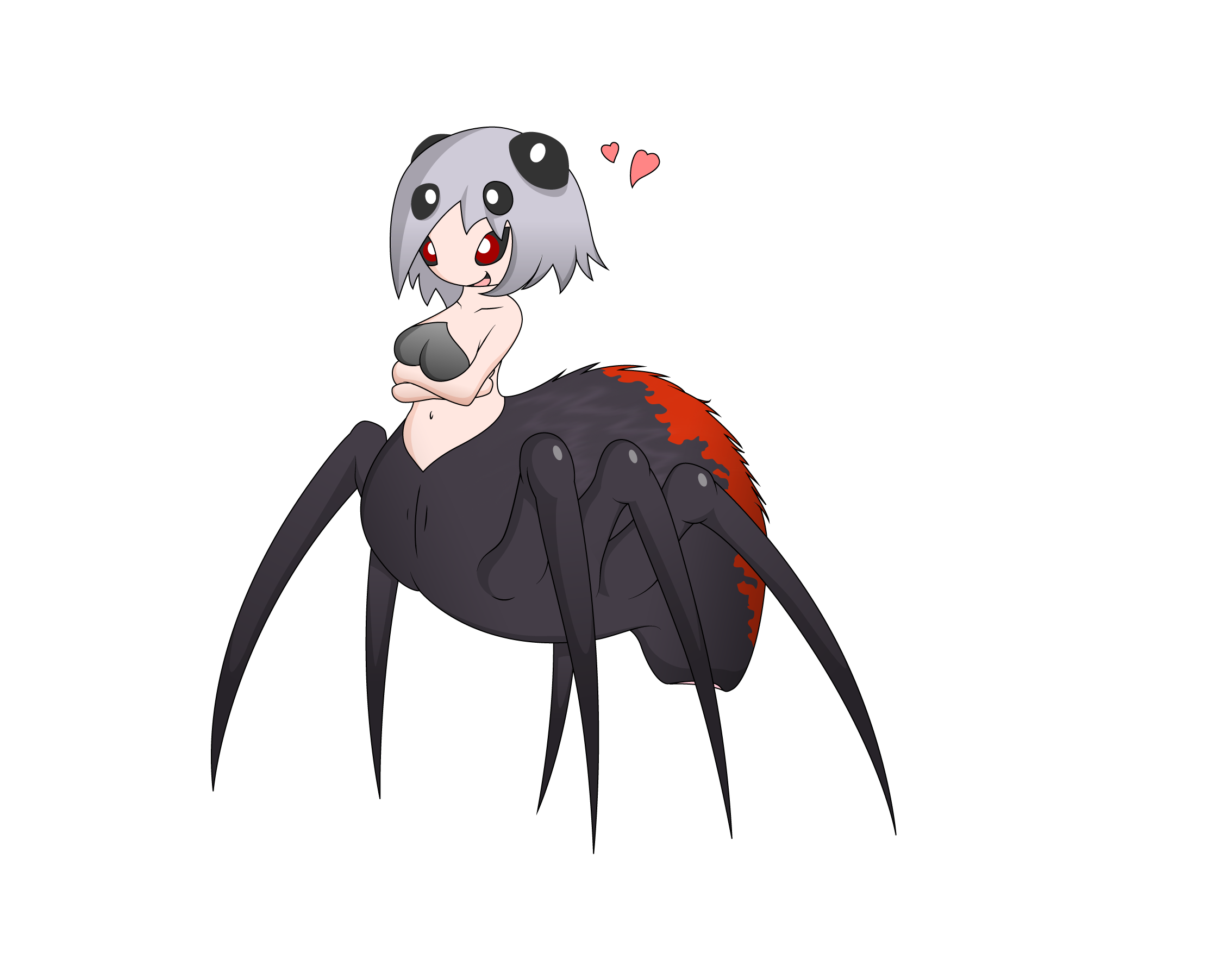 In our reality her spider species apparently produces clutches of at least dozens up to a few hundred eggs. While it would definitely be a lot of fun to write about a spider family taking over and webbing up the entire forest, that would derail the current direction of the story. I would like to keep the feel of 'spiders lay a lot of eggs', without having to introduce dozens of new characters.

This is why I'm looking for a justification for having her produce about 7 to 12 eggs.

I would prefer to avoid having the eggs and/or hatchlings die, to keep the tone of the story lighthearted. I would also prefer a biology-based answer over a magic-based one, since for the latter I would then have to justify why the magic works that way.

In case this bears repeating, I am aware that a drider (or any human sized spider) simply cannot exist based on the laws of nature of our world and that is not what this question is about.

Why am I looking for a justification when a simple 'it just works that way' would probably do? Because misaimed realism in fantasy stories is fun, of course!

Have you hear of r/K Selection Theory? (Wikipedia) Basically, when reproducing, there is a trade-off between quantity (r) and quality(K). You can make 5,000 eggs and lay them... if they are "low-quality," so low investment in energy into them, and low chance of survival per egg. If you only have one offspring at a time, you want to make sure that it survives, so you spend extra energy on protecting them and feeding them (both before and after birth.)

Humans, if you haven't guessed, are K-strategists. We put a lot of resources (time, energy, food) into each offspring. Most large animals are K-strategists as well. Making big babies requires lots of time and energy by default.

Your driders are also K-strategists, putting lots of resources into few children.

Maybe we can deduce the reason from drider anatomy. Myself not that familiar with driders, I googled up some images. Depictions of drider females are very consistent. 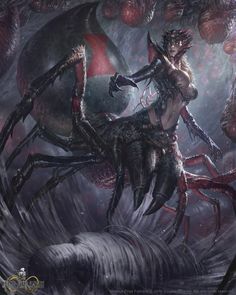 They are hard to miss in (every single one of) these pictures. Breasts means the drider nurses her young. Two means able to nurse twins at the same time, but even that can be a struggle - this was covered in an earlier question about number of nipples / number of offspring; generally # of offspring is half the # of nipples. Presumably that is because competition for food (here nipples) limits the number which can be successfully nursed to weaning, and so it makes more sense for the female to concentrate resources in a smaller # of young.

Thinking about egg laying creatures, they not infrequently lay more eggs than can be expected to survive to reproductive age. Eggs are eaten and young are eaten, especially when there is no maternal care as is the case for most invertebrates. Maternal care from something like a drider would be like maternal care from a rock python or crocodile - not as much opportunity for the sorts of predators that want to eat eggs or young.

But why 7 or 8, not one? Birds provide parental care and in many species, the 4 or 5 young that hatch compete with each other while in the nest until they are down to 1 or 2 left. Some mammals (armadillos, I think?) do that too. That seems a driderish hard-bitten sort of thing to have happen and that could account for your handful of eggs.

Since the Drider is still half human, it makes sense that at lease some human traits would carry through to the birthing process. 7-12 eggs is a reasonable average between human offspring (1) and spider offspring (dozens to hundreds), especially on a log scale.

A related topic is size. In general, litter size scales inversely with creature size. Small animals can have hundreds of offspring, larger animals generally have less. If the Drider is a large size, potentially even bigger than a human, then numerous biological and physical forces (i.e square-cube law) would encourage it to have less offspring.

As noted by others, the Dryder as described looks like a K-strategy species, a species that produces a small number of young that it cares for.

But you want lots of eggs.

This is a hybrid creature. What if we had hybrid reproduction?

Have her lay lots of eggs. But only 0-2 of them become Dryders.

The remaining dozen(s?) become normal spiders (or maybe huge spiders, or small spiders that eventually can grow to be huge).

Now, as a hybrid creature, we could add a means for the egg to develop be chosen that is less brutal than "the hatchlings eat each other" or "random chance".

The mother places the chosen egg within a "pouch", like a kangaroo. The egg within the pouch develops something like a placenta, and the egg-shell dissolves (maybe turning into an amniotic sac?), and then it develops in a mammal-like way until it is larger, and then comes out of the mother in a mammal (or pseudo-marsupial-like) birth.

In the animal world, large litters are laid by prey animals because a great deal of the eggs are eaten before hatching, or the newborns are eaten shortly after birth, by predatory animals. So they need to lay a lot of them, so that at least some survive. It's why introducing such animals to areas where they have no predators is catastrophic to the bio-system. ALL the babies survive, and the population explodes.

If Driders can defend themselves from birth (not unlikely) and if the eggs are well protected, then there's less of a need to lay a great many of them. This is in comparison to actual spiders, whose egg sacs can contain hundreds of baby spiders, only some of which survive.

Food. Small spiders have far more types and quantity of prey walking around to feed from. Driders do not. Laying 100+ eggs wastes energy as it means many of them will eat some animals but starve anyway, wasting precious food in the process.

Also smaller creatures get lots of kiddo's to make sure enough survive to adulthood. Small spiders are eaten by birds and other small animals before they get children, so you need lots and lots of small spiders to get by. Driders do not have this problem, so they can go @Itmauve his solution of more qualitative children.

Perhaps driders are a lot more complex than regular spiders, and so they require more resources to successfully develop while in the egg. This can lead to smaller brood sizes through ordinary selection pressures, as it's simply not feasible for driders to reliably secure enough food to produce larger numbers of offspring per pregnancy.

Not the answer you're looking for? Browse other questions tagged fantasy-races reproduction spiders or ask your own question.

12
Would female humans have more breasts if they had bigger litters?

36
Anatomically correct Arachne
16
The Centaur--Let's Get Real, Shall We?
20
If angels and devils are the same species, why would their mortal offspring appear physically different?
18
Why would merpeople let people ride them?
17
Explaining why dragons leave eggs for their slayers