Asking this for a more realistic view for ''rising of the shield hero' and possible uses in future writings. A shield is not a weapon, it is basically armor, that's why heavy armored knights rarely used shield and that's why hoplites didn't wear armor on their torso and upper legs, because the shield was just enough to cover almost the entire body.

When compared to body armor shields have advantages and also disadvantages, they are usually too heavy to be held on one arm by the average unfit person and soldiers were trained for tactics on how to kill and how to stay alive, not for strength but this had the advantages of lower cost when compared to armor and the ability to be moved around.

But so far I can't find a possible, hypothetical real life situation where wielding nothing but a shield as weapon is a good strategy.

Contrary to a lot of people's belief, shields were used as both an offensive and defensive weapon. 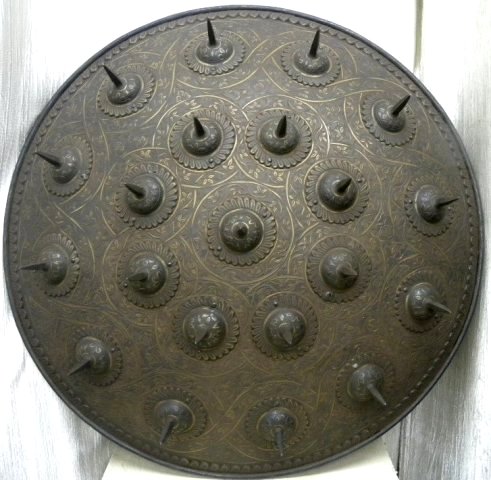 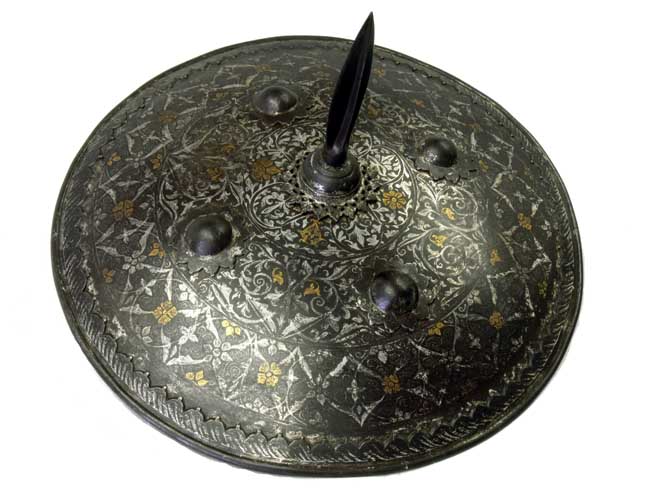 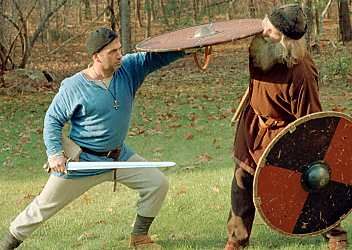 However your problem is reach and penetration. You can bash an unarmored opponent with a shield fairly effectively or just barge into them with it. However a sword or mace will have more reach and penetrating power than your shield, and a spear or pole arm will be massively more.

There's a reason shield-only fighting was never really a thing. You want your weapon to have some combination of reach, speed, precision and penetrating power. Shields are not good at many of those things.

While this might sound offensive (believe me, it's not), try watching the Marvel movies that feature Captain America:

I love watching his action scenes. They're actually quite creative as to what one can do with a shield. Of course we're both talking about an indestructible shield and basically a super human - but this is fiction. Why not, right?

Here's a link to a 12 minute video that shows him in action.

Additionally to Tim B.'s very good answer about 'usual' and JGreenwell's covering of 'not-so-usual' shields there is a third category: duel shields!. 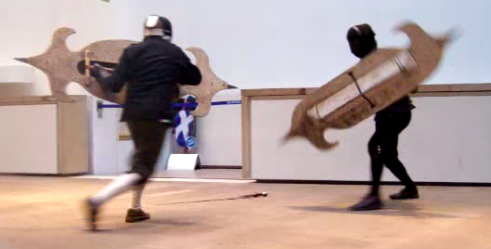 They were made for and used as weapons in duels and a form of martial arts was formed around their usage.

On the other hand there was also a wide variety of weapons (mostly daggers) for the explicit purpose of parrying attacks.

In other words: What is a "shield" and what is a "weapon" strongly depends on the context.

I think it certainly is possible to design combat around shields. But keep in mind that the "weapon + shield" combat or the "weapon + defensive weapon" or even a "one weapons suits it all" approach is the result of centuries of developement. Many lost their lives trying something new...

Thanks to JGreenwell! for posting this link: dueling shield manual

It gives a great insight in how dueling shields were used.

I've seen others comment on how the shield was used as an effective secondary weapon (and it was and would still be). However, since the question is "how can shield only combat be a good idea?" - I will add some real-life historical examples of how people tried (and in one case kinda succeeded) in using the "shield" as both weapon and defense:

These we know were real and actually used in at least one duel/street fight using the standard sword & buckler style. The fighter in the linked articles describes the shield & their usage:

[Shields] whose light was cast only forwards by their being made with an iron plate on that side towards the holders, so that their bodies remained in darkness, had not only the advantage of seeing him when he could not see them, but also dazzled and offended his eyes with the many near lights, which made him mistake those objects that dimly he discerned.

However, there are some weird combinations of these that not only had a place for a lantern but were covered in blades:

The above is a real piece from the 16th century, currently at the Kunsthistorisches Museum, Vienna

Yeah, why use a sword and shield when you can have both in one convenient package:

yes the blade is extendable. yes, this means that the weapon in assasin's creed actually has some basis in reality

Okay, there was a point in history where it seemed like they were trying to put a gun in everything. The odd part is though this one "failed" as a hand-held weapon, sources vary but most describe it as too hard/cumbersome to hold & aim by hand. It did have success when mounted as anti-personnel weapons on ships and was a precursor to some modern riot shields and our modern mounted gun shields: 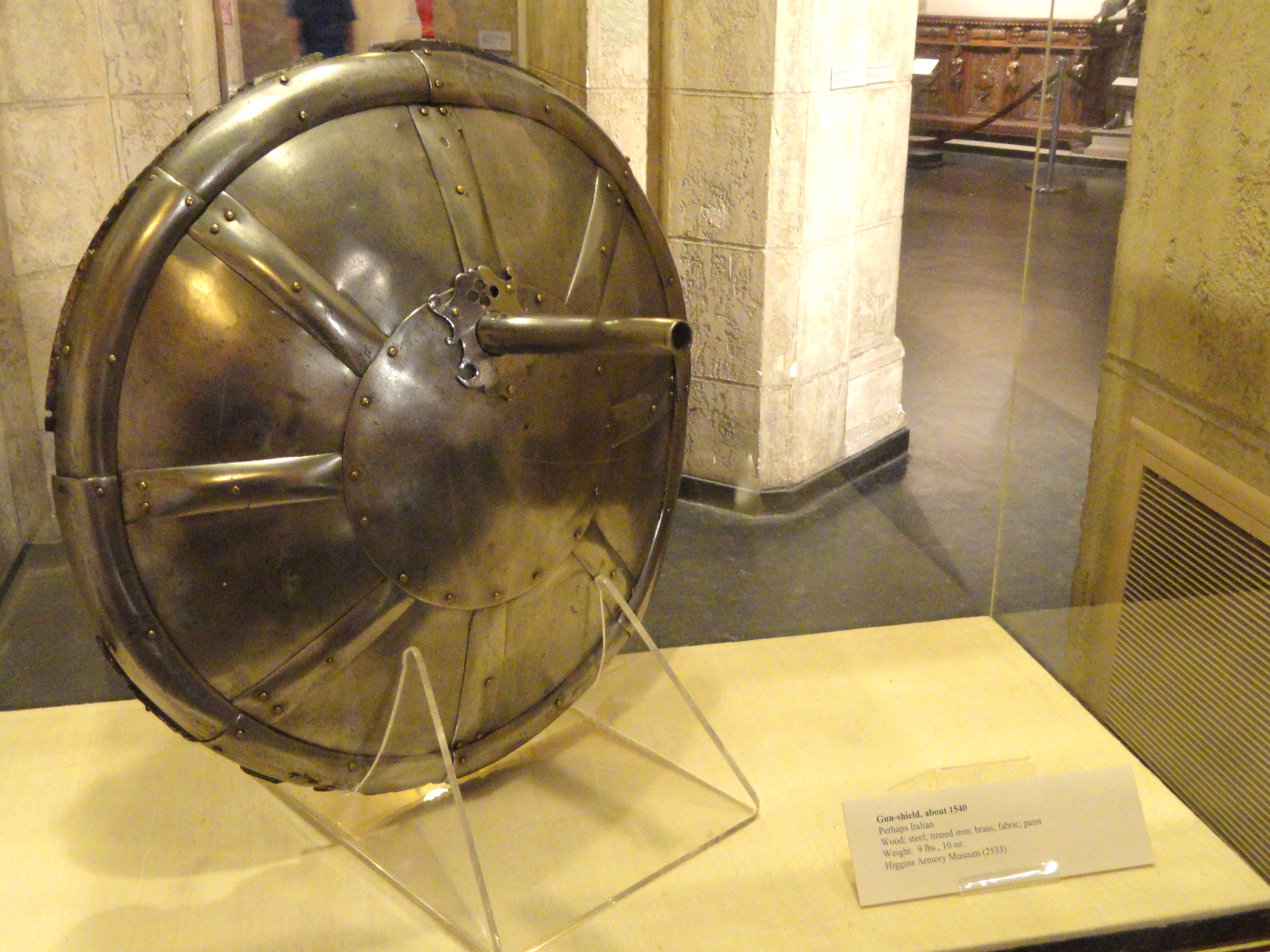 To add to the idea of gun shields, though modern versions are more a shield with a gun mounted behind it. At least one science fiction show, about a mad man in a blue box, has thought of how it could be adapted in the future to actually be more like its 15-16th century ancestor: 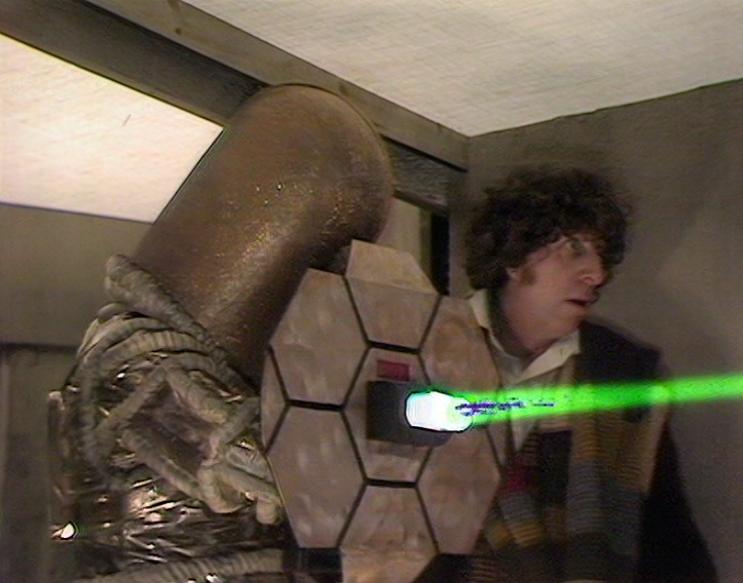 It's all about the combinations

A shield isn't just armour. The shield boss is a big lump of metal that can be used for bludgeoning. It's also for shoving while in a shield wall.

Your primary use would be riot and general crowd control, rather than combat. Situations where you don't actually want a bloodbath.

Unlike in Holywood movies, melee weapons break when they get banged against other weapons and shields. Fight a long enough battle and you will be left without a weapon, not due to choice but because that's the reality of combat.

Until you can get a weapon from someone else who's out of combat, you will probably have only a shield. If you happen to face an enemy in such a situation, you have no other option but to use the shield.

Here is an example of how to use a shield as a weapon, taken from a famous TV show (warning graphic violence):

You mean like dual-wielding shield? Or One Shield only?

There is no place in history evidencing dual wielding shield or shield only warfare. Someone with a sword (wich wasn't as used as one might think) spears were the most efficient and used weapon, cheaper, VERY effective, you would kill someone with a shield before the shield wilder could even reach you, yeah he may be able to defend against your spear, but for how long? Most people would have a buckler instead of a big shield, than buckler and sword, would be good for moving around on a daily bases.

There is a reason we have swords, shields, spears in most cultures.

I don't know of any historical combat scenarios, but this is Worldbuilding, so:

Shield-only combat facilitates nonlethal combat, which could be used for ceremonious combat, such as challenges for leadership, et cetera. I imagine also it could be similar to types of wrestling, where the shields are used to knock opponents off their feet. It could be useful, as others have mentioned, when there is no other option in real combat. And using only a shield does allow one to carry a second shield for extra defense. Or both hands to increase movement potential.

Possibly, the wielder believes lethal force is immoral and as such only uses the weapon of defense. Also possible would be that the shield needs two hands to operate.

It appears from your question, you are focusing on only single combat even if those singles are in a group. Carrying only a shield or only a weapon was a strong tactic of groups, but in single combat, one usually held one of each for good reason.

While it is possible and is historically proven by several answers here, it is ill advised. If you lose your shield due to damage or disarming, you've lost both your offense and defense.

Back in the day, there wasn't a Stack Exchange so folks had to try to build the one-offs in the hope of gaining an advantage or at least providing a distraction with the novelty.

Shield only, single combat? No, that's like playing a life-gaining deck in MTG: there's no way for you to win except by concession of your opponent; lame.

Spears poke anyone too close. Get closer and the shields part so the swords can cut you down. Re-close shield wall. All advance one step. Repeat.

To see this in action go watch the first battle (~45min) in the movie 300. Those shields are too small; imagine them full body size and you probably would need to use both hands. You'd likely have at least a dagger, but your only job is to literally hold the line. If you go down, so do the two others behind you.

Using a shield VS a two handed weapon is a trade off between better reach and offence, and more balanced offence/defence.

Your shield-hero could be someone who cares mainly about defence. Huge, pavise-like shields that an ally could hide behind too might develop in an open world that favours ranged encounters, where you can probably see the enemy long before getting the chance to get in mêlée range; in which case missile protection is your biggest concern.

Their offensive capability, then, would rely on moving in a testudo-like formation to advance under fire. If/when they get close, these are going to be your biggest strongest troops so would likely be able to push back enemy lines, or force a breach.

Either way you'd require a counterpart troop, either a shooter or long-pointy-stick-stabber. While your shield-warriors are great at protection, they would lack the actual damage output capability to be effective alone.

Brave are those who charge to the fore with their fortress shields, claiming ground in enemy range.

Strong are those who push back the tide of flesh.

Revered are those who make the ultimate sacrifice, holding until death so that many can flee

Let me offer a more informative take on this by first delving into the details on 'The Four Cardinal Heroes' - Sword, Spear, Bow and the titular Shield. The conditional restrictions being:

That being said, The Shield will obviously have the hardest circumstances, plot detraction aside, as they have little to no offensive ability. Naofumi picked the obvious choice of recruiting a party (in his case, slaves with a slave crest of loyalty engraved on them) to do the attacking, while he played his strengths, which are:

With all the informative exposition aside, the realistic approach would be to do what Naofumi did, and rely on teammates to do the attacking and damage while the shield wielder performs defense, logistics and support roles. Wielding a shield alone as only one person is rather difficult and more or less will depend on whether it is capable of dealing damage; there are methods and ways to do so, but it will more or less be on the level of 'difficult' and 'barely passable' - unless one possessed a shield with magical prowess similar to the Cardinal Shield, with all its potential for support skills and utilities - and even then, one would still need others to perform the offense roles.

Not the answer you're looking for? Browse other questions tagged reality-check warfare combat armors or ask your own question.

34
Wearing a cape during combat?
11
Mermaid Land (and Sea?) Combat
6
Help me Explain this Alien's Traits
10
Knights vs elvish guerillas
1
Would ai surpass humans in bipedal combat?
4
How could a medieval army only use unarmed combat and still be effective?
15
How can I protect witches in combat who wear limited clothing?
28
Would dual wielding daggers be a viable choice for a covert bodyguard?