This question about genetics (not required reading) contains the phrase "science of a Type II civilization." This got me to thinking: although we intuitively know what this means, does this actually tell us anything? After all, the only requirement to advance on the Kardashev scale is to have the capability to harness a particular amount of energy. What does that tell us about their medical or fundamental physics knowledge?

What level of development is required to reach Type $n\in\left\{1,2,3\right\}$ on the Kardashev scale (using Sagan's definition)? Put another way, what knowledge is absolutely necessary to harness the requisite amounts of power? Areas of knowledge that you may consider include, but are not limited to:

You can also discuss knowledge that may not be necessary to harness planetary/stellar/galactic amounts of energy, but must, or will almost certainly be learned beforehand. (For example, perhaps a certain knowledge of sociology would be gained in the course of coordinating a project on such a large scale.)

I've spent a good deal of time thinking about this and related problems. The puzzle caused by the multidimensional linkages between growth and technological progress has been a difficult one to crack. You can look up the giants in the field of growth, such as Solow, Ramsey, Simon, Harrod, as well as the New Growth Theory.

I have come to think that the best framework to start thinking about this issue is through the use of an expanding production possibilities frontier (also PPC).

I chose this because it illustrates beautifully the difference between efficiency improvements of existing technology (which, at best, can get you to the PPC) and the shift to new PPFs through the discovery and implementation of new technology. 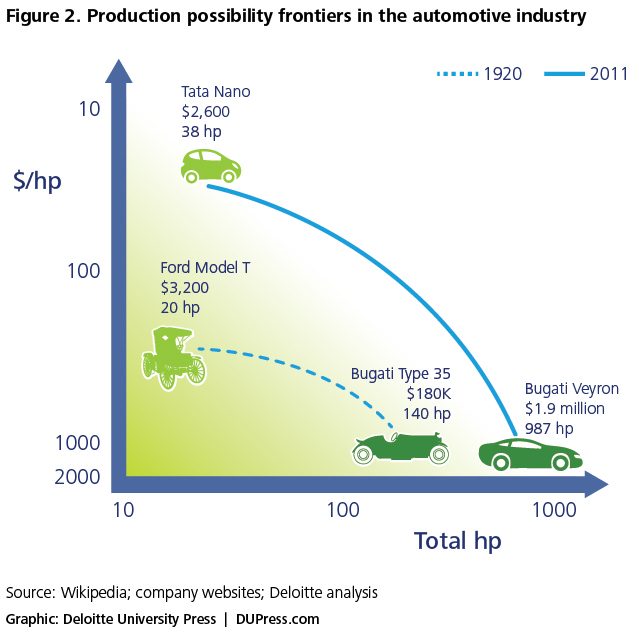 Even more interestingly, one such gamechanger can open the path towards another. Combustion engines were used to generate cheap electricity, and eventually cheap electricity was used to construct delicate electrical equipment, such as computers. Computers then were used to design better combustion engines, power distribution grids, better computers etc.

The fundamental question is whether there will ever be diminishing marginal returns to new technological research.

In other words, was it just blind luck that each gamechanger opened the PPF towards accessing the next PPF-expanding gamechanger, or is this reinforcing nature a fixture of human progress? In other words, is it possible that we'll reach an area where the next gamechanger is forever out of reach of our most advanced PPF, say in the way Fusion power always seems to be 50 years away? This could be the case if some technological insight requires, say, an IQ beyond the reach of humans, or energy density levels unattainable with the most advanced technology.

Our history so far seems to indicate that if there are diminishing returns, we are far, far from reaching them. The key concept here is the visibility of new technologies. For instance, consider the brilliant leaps of insight achievable by genius: Leonardo Da Vinci could use concepts extant in his world to imagine flying machines and tanks, concepts centuries beyond his society's energy-wise capability to implement. Despite that, these were visible to Da Vinci. 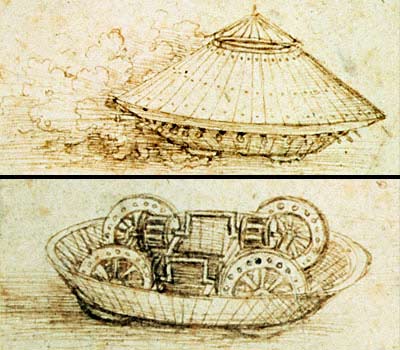 By contrast, no matter how brilliant Da Vinci was, he literally had no chance of inventing quantum chromodynamics, because the prerequisite nearby intellectual assets were outside of his PPF. It was only through the employment of more energy-intensive means of reality manipulation and measurement that the discovery of the subtle aspects of reality embodied in QCD literally became conceivable. QCD was invisible to Da Vinci. This finally puts us in a position where we can answer your question.

Reaching Kardashev Type I (10¹⁶W) is a hugely ambitious goal, since it would mean boosting our current energy resources by a factor of about 10,000. This is already so far outside our PPF that it is hard to even imagine. How would the world look like if, ceteris paribus, instead of an average US power consumption of 10.0 kW (which is essentially at the current frontier), we would average 100.0 MW? Essentially, you'd have the power of a Nimitz-class aircraft carrier in the hands of Joe Everybody, and that's not taking into account future efficiency gains, which are likely to be considerable as well. Think about it, the power that the most powerful nation on the planet wields (there's only a dozen or so of these behemoths in the world), would be at the fingertips of your average Joe.

This itself would be a greater leap than we've made in all history so far: from a basal metabolic rate of 100W, we got to 10,000 W at the frontier, most of it used to power industrial machines and robotic helpers. In reality, ceteris paribus would not hold, of course, so for instance human population will likely increase greatly before we reach Kardashev I, so the the per capita amount will likely be lower when we reach that threshold, although inequalities in distribution might mean that individuals might have access to levels far above that sooner.

Currently, there is an exploding PPF dimension, where expansion has not slowed for decades: 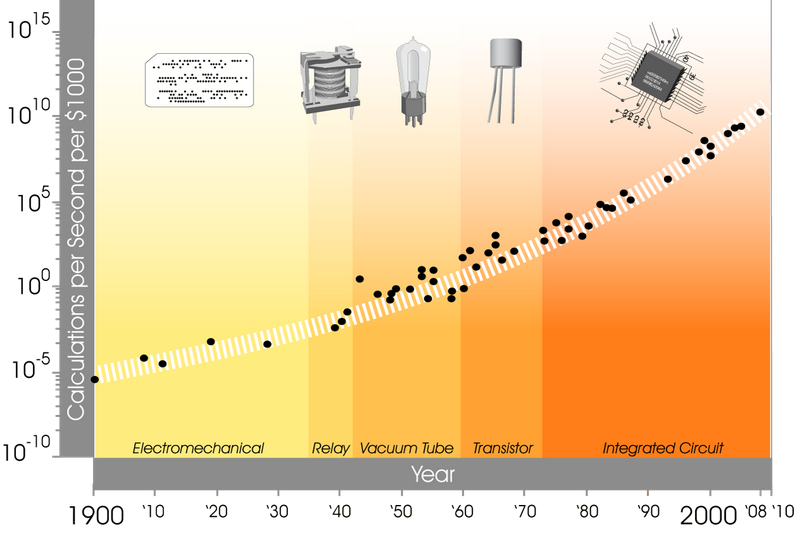 The implications of this relentless progress in the most scarce resource of all, namely intelligence, are surely vast yet their true scale and the new vantage points sure to be opened by them remain unfathomable. Even a marginally human-like special-purpose artificial intellect would change everything, probably more so than all the previous revolutions combined.

So, even on the path to K-I, there are gamechanging future technologies that we have visibility of, such as fusion power, competent dedicated as well as general purpose AIs, and full-blown nanotechnology. All three are massive game-changers in the energy, knowledge and manufacturing dimensions, which might help explain their relatively easy visibility from our vantage. There are sure to be countless others that remain invisible, some among them gamechangers.

None of these technologies are literally required for attaining Kardashev-I (as the OP mentions, in theory we could reach it with something much like current technology), but it is extremely unlikely that with massive boosts in available energy and the new vantages that opens such innovations will not be pursued, as they will appear as low-hanging fruit in that new context. Having been pursued, they will open a virtuous cycle of making new gains in energy harvesting possible, better computation etc., in turn making yet other potential technologies appear as low hanging fruit, and so ad infinitum or until the marginal rate of return becomes 0.

The scales are fairly similar for each component you mention: simply, as you have a greater understanding of all of those fields, you are able to harness more and more energy.

To put that another way, you can have Einstein and Newton and all the famous physicists and combine their brains, but unless you also have some mathematicians working out their principles, your scientists can't do anything significant.

To me, the "soft" sciences aren't so necessary here. Power is all about physics, not people: knowing how someone's brain understands and remembers all the physics isn't going to help you build a giant star-generator. The rest will develop at a similar rate, but with the more specialized/less fundamental fields lagging behind a bit. Adding to that, since power harnessing relies on engineering, power harnessing ability can never rise above the level of engineering, and will probably follow the pattern of lagging behind a bit. For your convenience, I shall provide a bar chart:

If we put some lines across that to represent Kardashev levels, we can see that it is even possible for a civilization to have mathematics one or conceivably even two levels above their civilization's level:

This does explain your Star Trek point: perhaps the technologies that enable them to zip across the universe so quickly have been refined through physics and engineering so they don't actually use that much power: thus, the power required is still in their power available to harvest. They have been able to refine this technology because they have knowledge of physics and engineering more advanced than their ability to harness power. Probably they set their scientists onto developing interstellar travel instead of power generation.

And yes, I am proud of my ASCII bar charts.

Many structures do not scale very well. One of the most classic issues is the square-cubed law which limits the ability for an entity to grow past a certain size. It if wants to be larger, it needs to have less density. However, lower density makes one unacceptable to all sorts of physics (like sandstorms).

Differing in opinion from ArtOfCode's answer, I would argue that the larger a society gets, the more its soft and hard sciences become harder to distinguish. The soft sciences have to be more codified (like hard sciences) to ensure the messages of the soft sciences do not get distorted with the weaker connections associated with lower density. Meanwhile, the hard sciences have to get more and more complicated, until they start looking like soft sciences. For a comparison, take a look at a naive CFD application which uses Navier-Stokes on a fixed grid. It is a very hard-science style approach. Now look at a modern high performance CFD designed to answer real questions about air flow through turbines. They often use things like Vortex Energy models which, when you read about them, start to look more like a soft science (particularly regarding transitions between where more traditional models do a better job and where the Vortex Energy approaches do a better job).

As an example, consider one facet of a civilization: composites:

Who needs advanced development? Establish loads of bases at Type 1.5-2 level in solar systems and keep establishing them and you can get a type 2-2.5 society. And also, in the Kardashev scale, the energy harnessed should be multiplied by how efficiently they use the energy (i.e. how much work they can do), so high-tech, low power equipment contributes significantly.

Not the answer you're looking for? Browse other questions tagged technological-development civilization energy scientific-development kardashev-scale .

21
Would a Type 2 Kardashev Civilization really build a Dyson Sphere around their own sun?
8
How could a civilization trigger star formation?
3
What could exist inside and between the walls of a Dyson Sphere?
6
Can my advanced civilization halt the expansion of the universe?
4
Minimum energy Kardashev scale
3
Hypothetical energy sources for a picotech utility fog civilzation?