Could a ~150 mile impact basin form from a small object imact?

Could a ~150 mile (240 kilometers) crater form from a small object impact?

So the object impacting the site of the crater is a human shape and not able to be destroyed. The location of the impact is in an ocean which is on average 1000 feet (304 meters) deep with the ocean floor made of mostly granite. The atmosphere is also similar to earths. The gravity is half that of earth.

The impactor can be as dense as you like and go from a human foot sized object to a refrigerator if that helps.

I used Down2Earth's impact calculator to try and find out what it would take to get what you want.

The only parameter I could get even close to what you want was the target site: the bed of a 300m deep water body, on an Earth-like planet. I used the densest projectile and the smallest available size: a 100m wide piece of iron. The angle with the widest crater is that of a head-on crash. 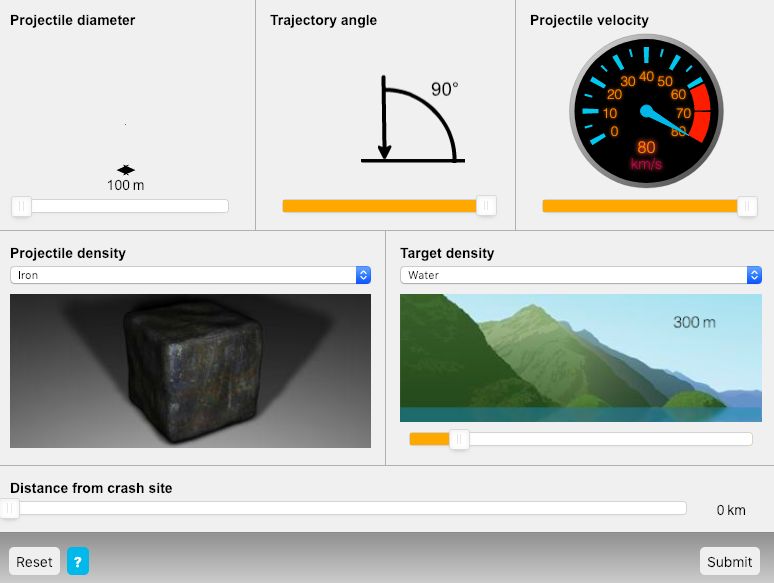 This is what we get: 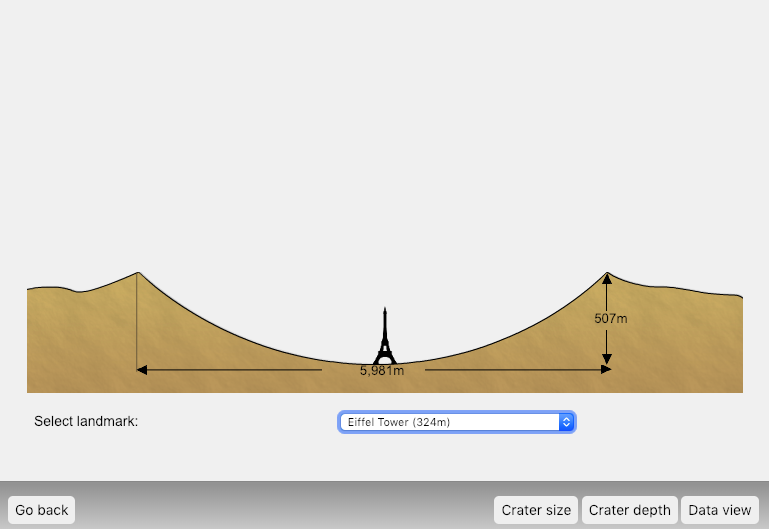 If instead of Iron we used uranium, or even osmium (the densest element), we would get approximately thrice the energy on the impact. The crater would still be one or two orders of magnitude smaller than what you want. But that's with the 100m wide impactor.

As you can see, for even an osmium man-sized projectile to give you the juice you need, it will need to impact at a considerable fraction of the speed of light. It will open a hole in whatever tectonic plate it hits, besides melting most of the crust around the impact, triggering a new Hadean era. If the planet has an atmosphere, it will evaporate into space. Gasified rocks will form a new, venusian atmosphere that may last a billion years. The debris from the impact will form a new Moon; the planet will have its mass reduced due to losing that debris to form the Moon, so the planet will have a smaller gravity after the impact. Also, its orbit will probably change excentricity around the sun.

If the solar system is already depleted of icy bodies (i.e.: comets) going around the orbit of that planet, it will never get enough water to develop life again. Otherwise give it a billion years for the crust to cool off and the atmosphere to renew itself, and maybe some microbial life will appear. Billions of years later, any intelligent life will never be able to tell that the impact happened.

To figure out how fast a body would have to travel to impart that energy the equation is $E=(1/2)mv^2$.

To scale that out to 150 mile wide crater would be far beyond anything even worth mentioning. Now if this god being were super massively dense, maybe the math would work out.

Not the answer you're looking for? Browse other questions tagged science-based asteroids cataclysms or ask your own question.

26
Could life form in outer space?
1
Post apocalyptic science based story
6
Can a 25 mile high volcano form naturally on a desiccated desert earth planet?
3
Could a giant asteroid impact break off to form a new, habitable moon while leaving the original planet in ruins?
1
Destruction of modern suburbia by railgun
36
Is there a liquid that could protect a human inside it from impact?
11
Could an object from space crash into Earth and set off a majority of the nuclear bombs created?
12
Shatoum: The Granite Citadel
5
How could someone ground a breathable synthetic atmosphere onto a small asteroid?
6
How long would it take for water vapor from an ocean asteroid impact to rain back down?