Plausible reasons for multiple hot seasons in one solar year

A planet generally with an earthlike climate, although slightly wetter and warmer as a general rule, with a little more oxygen in the atmosphere, but habitable by unmodified humans. Still has equatorial and polar variation.

Stable enough long enough to have evolved a sapient species with an adequate level of technology to completely contain expansion of a refugee colony of humans of mildly (but nonspecified) post-modern tech.

What good reasons could there be for this planet to have, multiple times per year, on either a completely or semi predictable schedule, extended periods of hot, dry, dusty winds that cause native life to generally close up and hide? This does NOT have to be planetwide, but does have to be prevalent enough that the sapient species and most others have evolved strongly adapted to it. By extended, I mean at least long enough for a caterpillar like metamorphasis of several hundred pound creatures to occur.

Solar year can be significantly longer than earth's, and the dry winds don't necessarily have to be connected to any other function of regular seasonality, ie not necessarily during a 'summer' or whatever. They should be predictable by at least several days however.

Edits: There is no need for the planet to be based in any particular kind of orbit as long as it meets the rules. The setting is more science fantasy than hard science fiction, so answers don't have to be super strict on hard science, as long as they make general sense.

The best answer will incorporate either an irregular cycle, or a cycle that is regular on such a long timeline that it is difficult to perceive, or a regular cycle with potential for intermittent irregularity. These periods would typically occur no less than 2-3 times in a solar year. The hot dry spells would not be so extreme as to be immediately dangerous to most creatures, but would be a severe stress over time if not protected/sheltered from in some way (ie walking around the Sahara unprepared)

Not very stable star could provide the answer, but the planet would have to have fairly strong magnetosphere which would present other problems.

Other solution might be multiple star system as mentioned in one of the previous answers.

Since the planet does not have to be a planet but can be a moon (by your specifications) I would imagine that if it was a moon of hot Jupiter on a fairly elliptical orbit. Depending on the exact orientation of the moon's orbit, its speed and eccentricity these changes in temperature can be caused by varying distance from both the sun and the parent planet with strong tidal heating in the perigee and then strong influence of the star in the planets perihelion.

Example: The Planet is elliptical orbit around its parent Binary star while remaining in the habitable zone. The varying distance of the planet from each of the stars would cause different temperature on both the planet and its moons across multiple orbits. The Moon orbits the planet in its own elliptical orbit, heating up in the perigee, cooling down in the apogee - this would cause periodic temperature changes during the year, while changes caused by planet's orbit around the parent stars would cause temperature changes with a longer period, making them seem "random". ... How stable such a system would be - that's a different question.

Edit: After some fidgeting in Universe Sandbox 2 I have been able to find a fairly stable system that somewhat matched the specifications.

If you have considerably longer days, then it's possible that those days become seasons. Let's say your planet rotates 3 times per 'year'. Sure, your days and nights are much longer and that's going to cause all sorts of havoc on your ecosystem (although it would go a long way to explaining the constant winds), but it also means that the day and night cycle would factor in to your seasons by virtue of the axial tilt.

If you're in daytime in the Northern Hemisphere while the tilt means that you're at a normal summer period, you have an intense summer. By the time it goes to night, you have a relatively moderate 'winter' insofar as you're closer to the light horizon.

In other words, a slow rotation means that your days and nights occur at different phases in the axial tilt, causing different degrees of intensity during your year.

Wind in general is caused by temperature variances in an atmosphere, and constant wind could possibly be caused by a sun that shines unevenly, with spikes in heat and light. In fact, uneven radiation or perhaps solar flares could result in periods of heat. Perhaps the sun darkens slightly before it flares, and that's how native fauna know to metamorphose?

Some other body would have to impart heat for only a portion of the year. I could imagine some sub stellar mass black hole out at ~10-100 AU away evaporating, giving off energy. Being a black hole, which at this point in its life does not have an accretion disc, would not be necessarily visible from the planet.

As the planet orbits, once a year, it would come closer to this object, causing a planet wide temperature increase. Now, depending on the planets axis tilt and which part of the sky this object is in, potentially one half of the planet would effectively have 2 summers, even though the actual day is shorter in its second summer, and the other half would have a scorching summer and a cooler winter. Now if the object is >100 AU and in alignment with the equinox, than it would not give you this double summer effect, just a warm spring/fall.

At this object (or the parent star) orbited, this double summer would shift year by year from the above "scorching summer" to a warm equinox and back to a double summer. all depends on the second objects orbital period.

A planet orbiting around a binary star system could have multiple warm periods as its orbit takes it closer to each star. Each star orbits the common center of gravity faster than the planet, resulting in multiple summers.

I have been mulling over the comments and answers and other astophysical speculation off and on since I asked this question, and I think I have a workable answer:

The habitable body is a moon of a gas giant. it has a decent magnetosphere and protective atmosphere and orbits in a timely fashion to cause a relatively earth-similar day and night (albeit with an enormous extremely bright "moon")

Sometimes, other bodies orbiting the gas giant come close enough to interfere with the magnetosphere and it flexes and causes gaps/thin spots in the protective layer, which allow an extra dose of radiation from the gas giant to get through (but not with a big enough affect as to cause massively dangerous conditions).

This is a pretty flexible answer as it could be one body in particular with a regular cycle of arrival or a variety of other bodies with varying orbital periods. Also would allow a layer of natives' prediction (The Harbinger moon comes! we must prepare!)

The world is flat*

*Full credit to the great Sir Terry Pratchett for his observations on this particular matter. 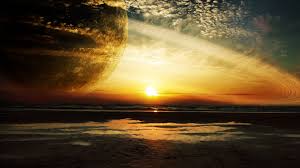 Your world's moon is close to it. Our moon is close enough to pull on the oceans and cause tides. Your moon is much closer. It pulls on the atmosphere enough to produce wind, and the gravitational interaction together with frictional interactions of the gases in motion heats the wind. This wave of wind tide circumnavigates your world, trailing below the moon and carrying with it dust and debris.

Tides are predictable. So too your wind tides. They would track with the movements of your moon.

I don't have much knowlege in this particular area but I think maybe a star or something that comes near enough to the planet to raise the temperature might be plausible. Or possibly a relatively quick " wobble " of the planets axis?

It's just IMPOSSIBLE without invok one (minimum) other star...

You can along hot season like you want, but the planet are in orbit and this fact imposes constraints : cycle. you can change day rotation duration, or planete rotation duration but you can't take season where and when you want ^^

Not the answer you're looking for? Browse other questions tagged planets xenobiology astronomy seasons .

7
Would a planet with a 4 year solar orbit have differing seasons?
4
What would allow a livable planet to have an always-night area, an always-day area and a day&night cycling area?
8
What's the longest plausible orbital period for a habitable planet with a 3:2 spin-orbit resonance?
4
How extreme can I make an altered solar cycle without destroying an inhabited world?
9
How do I design the solar transit of a hot Jupiter?
8
How can I make a planet covered in ice with an ocean beneath the surface?
9
A Planet Where The Four Seasons Occur Multiple Times In One Year?
7
Realistic ways a Planet or Large Moon could have Variable Day/Night periods
3
Climate on a slow spinning planet