Technology to produce food without land, what will happen with the land next?

Let's say we have the technology to produce all of the human food in factories without the need for land (i.e. Solarfood, Memphis Meats). Right now, there is about 50% of all habitable land use for agriculture. Also, let's assume we have more advanced technologies to produce our energy needs (fusion reactors + renewables) so we don't need to "cultivate fuel" as we are doing right now with corn and rapeseed.

It would be great if most of this land would be protected to reduce mass species extinctions. However, humanity is often foolish and it would certainly go in another direction. Landowners would still own their land and would certainly try to make a living out of it in a different manner and I don't see governments agreeing on a world protection program.

Anyway, what would happen with the freed land??

Thanks for your feedback!

It will go wild. 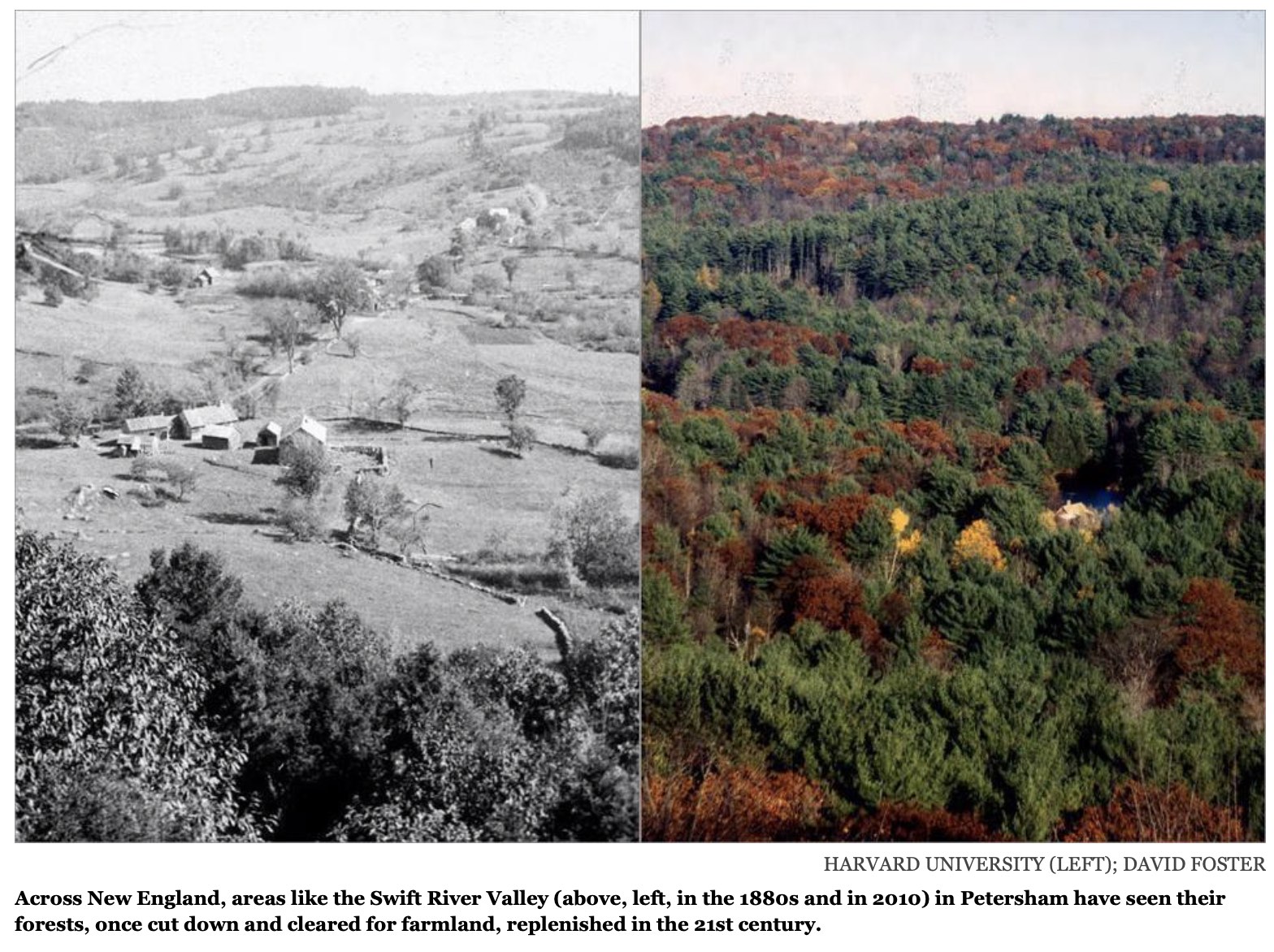 In 1850, when only about 28 percent of the land in Massachusetts remained in forest, the population of New England was about 4.8 million. The region’s population has since tripled, to about 14.4 million. But even as cities and suburbs swelled, rural regions were abandoned — and nature famously abhors a vacuum.

“It is very difficult to keep trees out of the New England landscape,’’ Foster said.

New England used to be farmland. It was outcompeted by the Midwest and New England farms were left to revert to forest. Not everyone likes that; there are programs in a lot of eastern states to encourage people to keep farmland as farmland - both to avoid development and also to preserve the heritage of these states.

So too your society. Farmlands will go back to whatever they were before. I suspect that some of these New England forests are occasionally logged by their owners but you can only do that once a generation.

Eventually civilization would relocate to the oceans (where it's safer and more efficient).

Humans are descended from hunter/gatherers. Those two activities required large expanses of land so we were inextricably tied to it. Eventually humanity domesticated land and the required expanses became much smaller but they still performed hunting and gathering on it -- and called it farming. If food production could be completely industrialized to the point where there was no dependency on land at all, then the value of land for the sole purpose of habitation would diminish greatly when occupying the surface of the oceans is a viable alternative.

Consider this. Cities are effectively artificial islands. The UN estimates 68% of the world population will be urbanized by 2050, up from 55% today. In North America the number is 82% today. This works because to city-dwellers food production and distribution are already industrialized. It demonstrates the proclivity of humans to be drawn to concentrated urban centers when food supply is no longer an issue.

Also according to the UN, 8 of the top 10 largest cities of the world are located by the coast, and 40% of the world's population lives within 60 miles of the coast. Yet the coastlines account for only 10% of the Earth's land surface. Humans are drawn to living near the oceans. Why? It is a source of food sure, but importantly because the oceans are efficiently navigable it is a source of efficiently harvested food, as opposed to the energy it takes to farm the equivalent amount of edible biomass. For the same reason, trade with other population centers is more efficient over the oceans than it is over land. Every great modern city on the coast started as a sea port for trade.

Finally, consider the natural hazards of large population centers located on land. Earthquakes, cyclones and hurricanes, floods and tsunamis, wildfires, dust storms and winter storms constantly plague the inhabitants of land-borne cities and occasionally destroy them. Indeed, land of Earth is not a particularly hospitable place for large human civilizations. But as long as we have a dependency on it for food production we will be stuck there.

With completely industrialized food production it would be much smarter for civilization to migrate to living on the ocean surface on floating urban areas. Land-borne hazards would no longer be a threat. There are areas of the world's oceans where violent storms rarely occur, and without the threat of inland flooding just become wind events. Cities could easily occupy climate zones where energy use is optimized -- no extreme heating or cooling necessary. They could also be relocated over time as needed, perhaps on a seasonal basis. Trade between floating urban areas would be as efficient as possible occurring over water. Population growth would also be more easily accommodated. Habitats would not necessarily have to grow upwards from the surface towards the sky, they could grow downwards into the depths, ultimately helping to float and stabilize the entire constructs. Cities could effectively resemble giant artificial icebergs.

Were this to occur, the abandoned land would return to nature as another poster has commented. The pockets of land-based civilization left would be the crews of mineral extraction operations, the ideological holdouts, the vacationers and adventure-seekers, and the romantics.

It may also be how humanity might survive an extinction-level meteor strike.

They paved paradise and put up a parking lot.

(What do you mean it's not really unlimited? Shush, you're harshing my feel, or whatever the kids say these days.)

Look at that piece of flat perfect land over there. No rocks, no trees, no muddy swamps. Let's turn it into more housing. We need more housing, now that we have unlimited food and energy, people are having more babies. We gotta put them somewhere.

That field behind it is a school. Oh and over there, the new shopping center. Unlimited fuel (fusion, wind, geothermal, solar) means all those fossil fuels we used to burn for food are available cheap for plastic! And now we have space for the factories, people who need jobs, and unlimited fuel!

We need tons and tons of parking lots. With all that cheap and environmentally safe fuel, we can drive anywhere. Who needs public transport or even taxis? Autonomous driving means even the kids get their own car.

So build all that new housing with extra parking spaces, and charging spaces. And some tracks to have fun. Parking by every school and store. And big wide roads. Asphalt used to cost something but now it's super cheap because we don't need all that petroleum for fuel.

Oh hey there are some old fields by that parkland. More room for parking lots! Gotta get out and see nature, right?

You want the old farmland to go wild you say? Sure, let's find some fields where no one wants to live. Birds are good. Deer are good. As long as they're not in my flower garden ya-know-what-I-mean. And as long as it's not my old field you're taking over. Unless you want to buy it. Same price as a parking lot.

Not the answer you're looking for? Browse other questions tagged science-based environment food agriculture extinction or ask your own question.

35
What is the next dominant species?
4
What average percentage of settlers is required to ensure the supply of food?
4
How long diversified food can be stored with early Middle Ages technology?
5
What is the highest quality method to produce steel with late medieval technology?
35
What's the smallest patch of land a single person could be food-sufficient on indefinitely, in a temperate climate?
17
Will food logistics limit the population of a civilization of obligate carnivores with modern technology?
7
What's the minimal space/mass required to feed a human indefinitely with advanced technology?