The last time I checked ASIMO's battery pack only had enough juice for something like 30 minutes of continuous operation & then it has to plug in & recharge which isn't really that useful.

I'd like my free range robots to have a little more up-time, somewhat less down-time & not have to worry so much about staying close to a suitable power socket.

So taking a page out of (the original box set) Gamma World's book I'm thinking of broadcast power.

Assuming a suitable frequency is given over to this & ignoring existing international agreements & national laws regarding radio transmissions.

A subsidiary question would be what sort of range would a transmitter have within which adequate power would be received.

*We want some space for a battery as well so up to half the size of ASIMO's current battery.

This is something us humans are exploring today, however instead of radio waves we move along the electromagnetic spectrum to microwaves. Using microwaves you can remotely passalong power with efficiencies up to 95% (which is pretty amazing, all things considered). However this comes with a few complications.

I probably wouldn't advise it for your robots.

What you need is induction coils

This is a bit of a hybrid technology but should suit your purposes. It's considered on and off as one of the options for the future of electric vehicles. Induction loop in the road charging via loop in the car. It's been rattling around for years as a viable technology, including now for charging phones and powering rfid systems.

It's that use for charging cars that you're more interested in though. Your robots have independent power from their batteries, but most of the time they're likely to be performing routine tasks in predictable areas. You can lay induction coils in those areas, allowing your robots unlimited uptime on regular tasks while their batteries allow limited free roaming for exceptional requirements.

In the early days of radio, people made homemade radios. These used a radiosensitive detector and could convert the energy fo the signal into audible noise - no battery required. The article is super interesting; I did not know that WWII GIs made their own crystal radios in the field using things like lead from pencils and razor blades.

As a crystal radio has no power supply, the sound power produced by the earphone comes solely from the transmitter of the radio station being received, via the radio waves captured by the antenna. The power available to a receiving antenna decreases with the square of its distance from the radio transmitter. Even for a powerful commercial broadcasting station, if it is more than a few miles from the receiver the power received by the antenna is very small, typically measured in microwatts or nanowatts.

So here is a (century old!) precedent for powering a device with broadcast power. I wondered: could someone use that same power gathering technique to, say, light an LED. Yes! 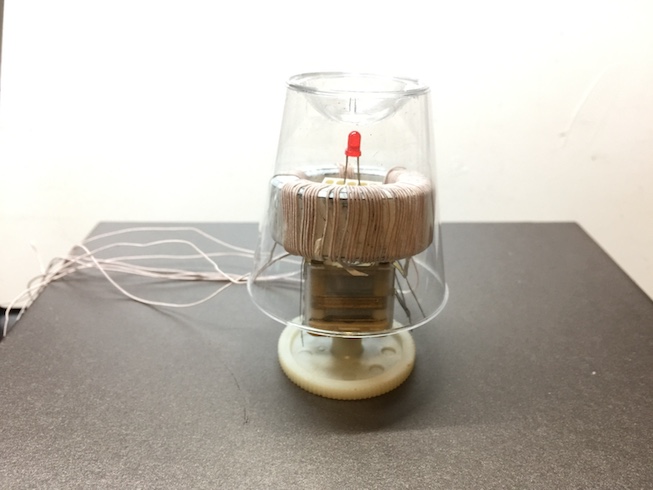 My home is on the 56/F of an apartment. I have a 30 meter antenna hanging out of my window at night when I need to test, I push it out using a fishing rod so it is 1.5 to 2 meter away from the wall of the building. My building is located on on the coast facing a transmission status 10KM away on the island called Peng Chau. There is no obstruction from my building to the transmission station unless there are huge cargo ships on the waters. There is another transmission station on the shore 10kM over a hill called "Golden Hill" with lots of obstruction.

I think the LED guy is so awesome!! So - it is possible to power small devices with radio waves. It is not new technology. People in the area do not explode into flames.

How much radio wave energy can you pump into an area before people explode into flames? I have looked for reports of accidents with radio waves but no luck - it would seem radio waves are pretty low toxicity for life. You can see loads of healthy vegetation growing right next to powerful radio towers.

For your story you could pump loads of energy into the area and let the robots harvest wherever they are. Maybe it could actually be radio waves carrying popular music which other other characters listen to on their crystal radios. Another alternative - the robots might be far away but if you can hit them with broadcast power the reverse is true. They can tell you where they are. If you know where they are, you can train a dish on them from your tower and broadcast power right at them. That would be way more economical.

Current wireless charging technology, is all near field, not broadcast.

The only type of practical broadcast power is that used by bumper cars - a metal floor and electrified ceiling. (but this is not a wireless broadcast)

everything else, is mis-representation or a toy

The sun is a big ball of flaming hot stuff that radiates power in all directions. By the time it gets to earth and filters through our atmosphere, you're left with around 300 watts per meter squared of area. So while you can't have an antenna due to the dominant wavelengths being much higher, you can have a receiving panel. If you have a 10% efficient panel of 50cm each side (0.25m2), you can get a theoretical 7.5 watts. Not really enough for a robot mobile, but if you pretend to have better solar panels you could get up to 75 watts, which is enough for some moderately energy efficient systems (a laptop charger is about 75 watts, the curiosity rover's RTG outputs about 100W).

Going through your requirements:

No, transmitting towers aren't good enough
Let's say that the sun isn't good enough for you and you have to have a transmitting tower. It's going to have to be a powerful transmitting tower. Lets say you want to get that 300W/m2 at 1km radius. The inverse square law is the killer. If you're 1 meter away and receive 1W/m2 of energy, then being 2m away gives you 0.25m2 of energy. By the time you're 1km away, you're receiving 0.000001 W/m2 of energy. Reversing this tells us that to get 300W/m2 of energy at 1km requires a power output of something like 300,000,000 W/m2 at 1m radius distance. For reference, if you switched on all the backup transmitters of the most powerful transmitter in the world while it was operating, it would only output about 3MW, still 100 times too low.

Because we've gone with the same power output as the sun at 1km range, we meed all the power requirements from your question. However we now have:

The Asimo Robot draws a huge amount of power
The asimo robot has a lithium battery that weighs about 13 pounds (5.8kg). Most lithium chemistries have a power density of about 100-200 Wh/kg. This means the robot has about 600-1200 Wh of energy, which it drains in half-an-hour which results in an average power draw of 1.2-2.4kw.

Summary
Powering the Asimo robot via broadcast power is not feasible. The Sun is the most powerful thing you will find that is "safe" and omnidirectional, and it's around 20 times too weak. As it turns out, there are reasons why we don't power robots via broadcast power anywhere other than micro robots on laboratory tables.

"The transmission must be omnidirectional."

This is the primary impediment to using this as an efficient means of transmitting power. By its very nature, it will limit the power received, by the SQUARE of the distance from the transmitter. (a factor of 1/r^2)

Consider a spherical shell of photons/fields/particles moving outward. As the radius increases, the same amount of original stuff, must now be spread out over a greater and greater area. The result is that a given square meter of the shells surface area will contain less and less stuff and the shell expands. This is called the "inverse square law" and wikipedia has a great image that displays this well.

The end result is that, unless your power recievers are very large, or very close to the power source, most of your output power will be lost to space.

One possible workaround for this would be to change the requirement of "omnidirectional" to "multi-directional".

[Another, more complete, answer mentions this, but I wanted to provide some more details than a comment affords.] 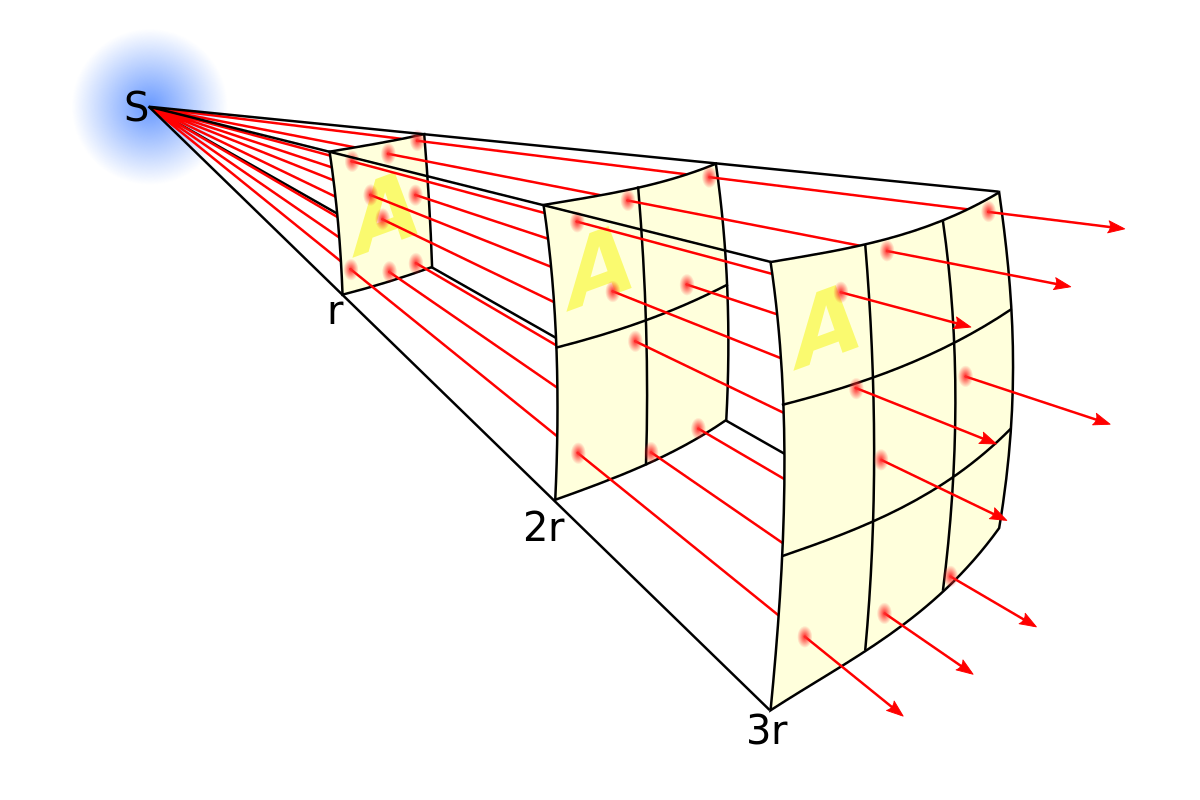 As an example: consider a robot 1 cubic meter in size, that is 2 km from your power source. The robot has a cross section of 1 square meter, the sphere at 2km has a surface area of about 50 MILLION square meters. So, if the robot requires 1 watt of power to get out from under a tree. Your omnidirectional transmission source will need to put out: 50 Megawatts of power.

Nikolai Tesla invented something he claimed delivered power through airwaves. Too bad nobody understood how it worked. But yes it should be possible.

Not the answer you're looking for? Browse other questions tagged science-based reality-check robots power-sources or ask your own question.

3
How can i get around power limitations due to battery size?

14
What are the power options for intelligent humanoid robots?
2
Power Source For Gauss Gyrojet
1
Portable, high-output power generator?
2
Can a high power EMP generator keeps killer robots at bay?
16
What problems would arise for the human species making itself into robots