Could one make a smaller eclipse kept stationary on the surface of the earth in order that one may be able to see the stars 24/7 from one site?

How could this be achieved?

Geostationary satellite with a heap of fuel to steer it keeping the shadow path on the one point?

To generate an eclipse the satellite should have at least the same angular size of the Sun, which is about 0.5 degree. The relation between dimension, distance and angular size are expressed according to the formula $\alpha=2 \cdot arctg$$D \over L$. 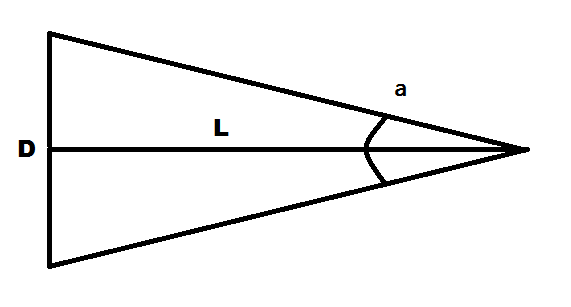 Considering that the geostationary orbit is at 35786 km above the surface of Earth, this gives us a transverse dimension for the satellite of at least 333 km.

A structure of that size could be built with something similar to a solar sail, a thin and opaque foil kept in position by a frame, and it would be a challenge to balance it against the pressure of the solar wind and solar light. Not even mentioning the need to repair it against any hole created by micrometeorites.

Last but not least, the Sun is not at the same azimuth around the year. I am not a pro in orbital mechanics, but I am pretty sure that there is no way to keep a satellite geostationary while chasing the Sun along its walk across the ecliptic around the year.

Summarizing, a geostationary satellite would not be feasible: too large for our current technology level and not able to chase the Sun year round. To quote what AlexP stated in a comment to the question:

A stationary eclipse requires an object which sits always on the line between the Sun and Earth. Such an object revolves around the Earth with a period of one year. The radius of an Earth orbit with a period of one year is exactly the same as the radius of the orbit of the Earth; the problem is that there already is another object there, namely, the Sun

A much cheaper way to create an eclipse like effect is a coronagraph.

A coronagraph is a telescopic attachment designed to block out the direct light from a star so that nearby objects – which otherwise would be hidden in the star's bright glare – can be resolved. Most coronagraphs are intended to view the corona of the Sun, but a new class of conceptually similar instruments (called stellar coronagraphs to distinguish them from solar coronagraphs) are being used to find extrasolar planets and circumstellar disks around nearby stars.

The coronagraph was introduced in 1931 by the French astronomer Bernard Lyot;

Of course coronagrphs only work for observations through the telescope they are attached to and thus do not make it possible to see ordinary stars with the naked eye during daytime. However, the brighter stars can be seen in telescopes during daylight if aimed at the calculated position. And daytime air is usually more turbulent than night air making observations less useful.

As far as I know, nobody has yet invented a method of making the stars visible during daytime for people using the naked eye.

You can put your umbrella in the Lagrange point between earth and sun (there are a few satellites positioned there observing the sun), trouble is L1 is 1.5 million kilometers away, so your umbrella needs to be tremendously (5 times our moon) large, and you need to move it forth and back by ~12000 km per day. (Side note: your town has to be somewhat close to the equator, because otherwise you need constant additional propulsion to keep the shadow from moving towards the equator.)

(Also you wouldn't be making friends with your neighbours, because a terribly large area around your town, much larger than with an ordinary solar eclipse, would not see much of the sun either. The way weather works, everybody in the vincinity will get a severe temperature depression from not getting much sun plus a constant downstream of cold and dry air from the upper atmosphere. Freakin' cold, no snow.)

If you have steady enough wind, you might just build an oversized airplane and let if hover over your town. It's huge, lightweight, and flying very slowly, so it won't need much energy. You could probably power it with photovoltaics. Much friendlier than my other proposal above.

Of course you need to ground it overnight. Where do you land with a plane that is several kilometers large?

Not the answer you're looking for? Browse other questions tagged astronomy engineering eclipses or ask your own question.

21
How big would a satellite need to be to block out the sun?

6
A villain with a system (located on ground) that has created a catalog of earth orbit satellites
12
Could life evolve in the degenerate era of the universe?
23
Can you replace a sun with a burning moon?
6
Please help me calculate acceptable planet sizes & eclipse shadows cast by my binary planet system
2
How long is a solar-solar eclipse in a Binary Star System?
6
Could [life on] Earth Survive a Gamma Ray Burst?
6
Does my plot point centered around eclipses make sense?
26
How can a planet have a deadly eclipse-like “spotlight”?
1
Longest possible eclipse in double star system
2
Calendar-Worthy Events on a no-axial spin distant future Earth