On a distant planet covered mostly by water a species of highly intelligence cephalopods have evolved and even developed space travel. The problem?

Most other species are land dwellers and the cephalopods need a means to traverse their space stations and cities. Without a skeleton of their own their land travel is limited to an undignified and uncomfortable crawl that is entirely unbecoming of the most ingenious species in the galaxy.

The solution? Build their own skeleton. An exoskeleton specifically. Ideally one that can be powered by the cephalopod's own muscle strength.

So my question is; Would it be feasible for a cephalopod to move on land by inhabiting a non-powered exoskeleton and moving the limbs with their tentacles. In my mind it works by the cephalopod entering the tightly fit exoskeleton, which provides the creature support enough to not collapse under gravity, and use their own flesh in place of the muscle tissue normally used to move the skeleton around.

If this combination wouldn't be functional what would be a way to make it functional? Preferably keeping with the non-powered artificial exoskeleton concept.

The problem lies in how and what to build the exoskeleton out of.

Cephalopods are not really as dexterous as humans are; they might use something like chopsticks, made of crab's claws or something similar, for the fine manipulation.

Underwater, no metallurgy is possible, and very little chemistry, since water is so good a solvent.

Once they realise they need the exoskeleton trick, or the necessity of some kind of artificial implements, I think the best route left to our cephalopods might be to breed clams to produce mother-of-pearl and aragonite shapes, and others to dissolve them or weld them together. Then, they can start making exoskeletons out of interlocking, welded mother-of-pearl parts.

I fear it will be a long and frustrating road.

Then, they meet the land-dwelling species and basically breed and enhance them, until they discover fire. And, after long experimentations (cephalopods are fascinated by fire), they discover metals. Tin, copper, bronze, iron.

At this point the exoskeletons will be made of metal struts and mother-of-pearl, and by the time they discover space travel, chances are that they're mostly using battery-powered exoskeletons.

Unless there is some non-technological way of achieving space travel, I'd expect exoskeletons to pre-date space travels by a very large margin.

I don't see why this wouldn't be feasible. The simplest incarnation of some sort of exoskeleton would probably just be a few strong sticks that the cephalopod grasps with its tentacles. It wouldn't be that different from how we use crutches or stilts to lift ourselves. If the cephalopods are anything like what we have on Earth they should have no trouble wrapping their tentacles around a piece of wood or metal and lifting their own body weight without any additional mechanical help. Using four tentacles to grab four walking sticks would still leave an eight-tentacled cephalopod with plenty of appendages for holding and grabbing and manipulating its surroundings.

I am surprised that no one has suggested this yet. If your cephalopods can build interplanetary travelling ships, they can build mechas. 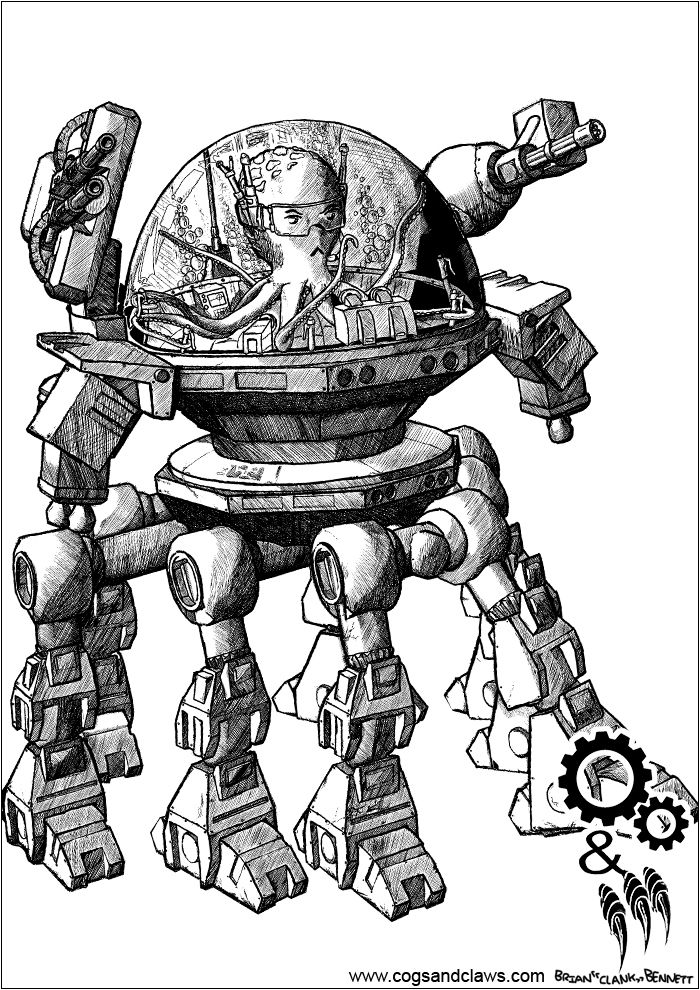 Yes it would work with three things to consider:

This species, early in their history, would have to develop an understanding that their advancement is limited by their environment. By saying the world is mostly covered in oceans, I would assume that there is some dry land somewhere. Around that dry land, a branch of this species would develop a form of amphibious abilities or tactics to crawl on land to develop the technologies to gain an advantage over other species or their own kind. This would be metallurgy and chemistry as others have pointed out that would be difficult (not necessarily impossible) to develop. They may have got an understanding of metallurgy around geothermal vents. needing a safer place to advance this ideas, the land and air would be the solution. The race that either develops the strength to crawl on land or develop a crude tool to assist them, such as an exoskeleton or crutches. The race that manage to get on shore would become the dominate society and what ever method they used to accomplish this would be further developed and improved on over t

Give your exoskeleton hydraulics

Cephalopodes are squishy. Like, really squishy. That's how they're able to squeeze through just about any hole. Because of this, a cephalopod isn't really well suited for a rigid exoskeleton.

However, they are well suited for a hydraulic suit. Besides, what better way to direct energy for a sea-dwelling creature than water? Since hydraulics are pretty robust, there isn't necessarily a shape the suit has to be, but for familiarity's sake lets make it humanoid. For this, the best design is what we know best: humans. The suit would need some sort of internal skeleton for support, and each muscle could be replicated with a hydraulic cylinder.

Wrap the whole thing up in a flexible outer layer aaaaand, that's pretty much it!

Octopodes are unexpectedly strong (see #4). That means your octopode could control the entire suit from just one small area; it doesn't matter where. It could be the torso, the head, it could even be an arm! The most ingenious species in the galaxy certainly could work out the hydraulics from any point in the suit. For example's sake, lets use the head. Your octopode's entire body will be there. Then, attach a hydraulic hose from each cylinder to a connection at the head, and your octopode should be able to control their entire suit from their dark, damp, enclosed area. Any octopode's dream home!

If your octopode wanted to straighten their arm, all they'd have to do is extend their "bicep" cylinder and retract their "tricep" cylinder. That's how we do it, after all; we just have fibers transferring the energy instead of water. Retracting cylinders shouldn't be any more difficult than extending for them, because their suckers are pretty darn strong too.

In addition to being strong, octopodes can control their individual suckers with remarkable precision. That lets them make large movements with their tentacles, while fine movements (such as fingers) could be powered with their suckers.

Lastly, since the octopode isn't actually in most of the suit, it's got a great escape mechanism: if a limb is threatened, just lose it! In our example, if the threat was big enough, our octopode could even just pop the head off the suit and scamper away.

This is not natural for cephalopodes. Wikipedia said they have no conception of form. They like to hide in spots, liquidly filling them. The idea of becaming connected rigidly to some carcass should probably sound horryfying to them. Cephalopode in exoskeleton is a crucified cephalopode.

They also have taste organs in their tentacles. I don't think they'll like to always taste their exoskeletons.

Also I believe the muscles in their tentacles should work in some other way. They are not adopted to the kind of work needed to move the skeleton.

In principle, they could evolve to live with an exoskeleton, but it should require a lot of effort and time.

Not the answer you're looking for? Browse other questions tagged science-based reality-check xenobiology or ask your own question.

4
Cephalopods Inherit the World
10
How large a bioengineered mobile lifeform could exist on Earth?
26
How to make the development and use of Steam Engines preferred over that of Combustion Engines?
7
The plausibility of a mind-controlling and genome-altering pentastomid
5
What would the size constraints on my creature be?
74
What (modern) weapons could be used to destroy skeletal enemies as completely as possible?
10
What metals other than calcium can be used to create alien bones that won't also engender a human-toxic environment?
21
Are dragons useless when there are guns?
5
How light can a quadruped's legs and relevant muscles be in proportion to their body without losing function?