In a land similar to the Roman Empire, slaves are used to drive machinery. Mostly this is a matter of getting them to pull carts or wind handles.

The Emperor wants a clock that is accurate to the minute, powered by slaves.

With the technology of Ancient Rome and unlimited slave-power, how can such a clock be accurately regulated?

Let us suppose that the clock has a face similar to a modern-day analog clock.

The clock cannot be regulated by referring to another clock. It must be self-regulating.

Water power, sand-timers, wound-springs etc. are not to be used directly to power the clock - just slave manual power. However an (unpowered?) mechanism will be need to regulate the machine.

One possibility would be this set-up, all components being available to your parallel world Roman Imperials:

Component I: is the temporal regulation mechanism. Deep within the works of the Horologon, is a water cistern that is kept full from municipal water supplies (the Aqueduct). Pipes bring water down to a valve that is set by the engineers to flow at a certain rate. The water itself is brought up into a marble statue of a water nymph and is ejected from her left nipple at a constant rate. The water so ejected squirts onto a small water wheel which thus rotates at a constant rate. Two of the water wheel's buckets have projections that strike a small brass chime held by a bronze satyr at the wheel's base.

Component II: is the slave regulating mechanism. This component consists of a slave, two wooden mallets and two bronze nakers (a kind of drum). The slave, taking his cues from the satyr's chime, beats out a lively rhythm on the nakers which will regulate the slaves that actually operate the horologon itself. The rhythms vary by the hour, and close attention paid by passersby will immediately tell them, just by listening, what the hour is, even if they don't look up at the horologon's clever display.

Component III: are the slave tableaus. This is all part of the magic of Romanesque time keeping: the day being divided into fifteen hours of the clock, based on the calculated number of chime beats on Midsummer's day, there are therefore fifteen tableaux visible on the horologon's portico. The figures in each tableau are dressed in characteristic fashion of a particular region of the Empire and the slaves in each tableau dance in a fashion characteristic of that region. Other slaves, the tempora magistri, or "conductors", beat time along with the nakers by tapping their feet and striking the floor of the portico with their batons. Baton strikes are carefully counted and choreographed with the rhythms of the nakers to occur every half minute, first one strike then a double-strike. Every minute, or every double-strike of the conductors' baton therefore denotes one minute. At this moment, the tableau advances slightly around the portico.

Component IIIJ: is the horologon's display. Resting upon a great toothed rondel of hard wood at the centre of the tableau is a similarly toothed rondel from which radiates fifteen long spars with red legionary shields at the end of each, upon which are painted large numbers: J, IJ, IIJ, IIIJ, etc. up to XV.

Component V: is the housing. Naturally, the Emperor wishes to help the people of the Eternal City tell time, else why build a public horologon at all? But more importantly, he wishes to make a grand and opulent public display of the whole matter. Sure, any Marcus Aurelius in the street can look up at the Sun and say, oh, it's a little after noon. But the Emperor wants to make sure that not only his own subjects, but also traders from distant lands and embassies from rival empires and visiting dignitaries alike are awed by the cunning engineering and obviously vast wealth of the Empire. To do this, the entire horologon is housed within a marble temple like building, perhaps on the end of one of the basilicas. The beauty of its painted statuary and mythological stonework is a feast for the eyes; and all eyes will be drawn to the huge arched skene, the stage where the tableaux play out.

Component VJ: is the general orchestration of the horologon. All well and good, but how does one actually tell time? Quite simply, if one is sufficiently literate, one can simply read the numbers on the dial. As the big XIJ moves across the stage, you know it's twelve o'clock. If you're clever and you notice the evenly spaced markings along the base of the stage, you'll see that each time the conductor double-strikes his baton, the cartouche moves from one marking to the next. And, again, if you're literate, you'll notice that these markings are labelled: prima, secunda, tertia, etc. The big numbers indicate hours of the clock, the small numbers indicate minutes.

But the wise observer will note the horologon does much more than count minutes and hours. Indeed, the wise Emperor has devised the tableaux in such a way that each set of costumes and each set of dances is constantly changed over the course of time. Every day, the timed syllable chanting of the slaves, with its calculated number of syllables per line & strophe, corresponding to the passage of minutes, changes -- one day, hymns to the Moon or the Stars or to Istar or Ares; every two weeks, the dances change slightly and every month the costumes change as well. Every three months, the over-arching theme changes. Thus, the observant student of the imperial horologon can tell you what day, what hour and minute and in what fortnight and season you are currently in, all by observing and listening to what the horlogon of Emperor Minimus is telling!

The quirk being that neither the pendulum nor the need for accurate time keeping had been invented in the period you're asking for, but gearing was already in use, the basic physics of a pendulum regulator could follow well enough.

With the mention of the analogue face, I'm going to assume they have a decent grasp of gearing. From there you need to control the speed that the slaves are rotating, for that you can use a simplified centrifuge governor. 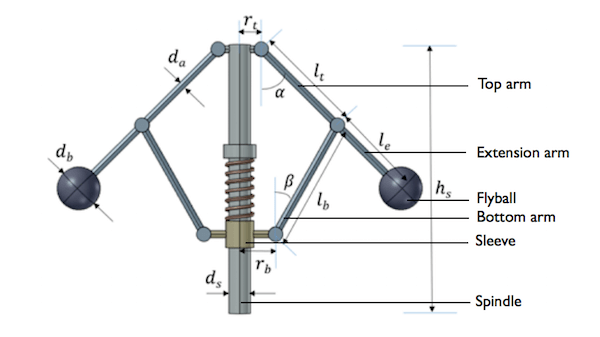 Attach an arrow to the flyweights and have them point to a sweetspot chart and you could maintain a somewhat accurate fixed rotation speed.

You build a release for polished, uniform stones on the top of a slope or fall, which is triggered by the stones hitting the ground.

Not the answer you're looking for? Browse other questions tagged technology ancient-history time-keeping or ask your own question.

13
If all our technology disappeared, how long would it take to make a smart phone?
15
How can a floral clock be made accurate enough to replace normal timekeeping?
71
How do I make an alien technology feel alien?
4
How would early and unlimited access to gunpowder change bronze age warfare and technology?
6
How would Zeus throw thunderbolts if Zeus were actually using technology?
11
How can my ancient Roman civilization develop effective steam power for use in ships?
4
How would you make a universal measurement of time?
12
How to make FTL-technology an narratively interesting suicide-pact-technology?