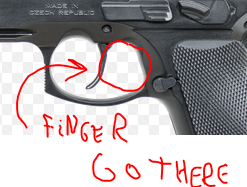 13
Supersonic bow and its wielder
8
Is it realistic or possible to implement the loading mechanism of a shotgun into a crossbow?
2
Creating a steampunk-esque/cybernetic "Big Iron" revolver
24
How to build a Blood Gun?
38
In modern day combat, what would warrant singing during battle?
5
Feasibility of (very?) low altitude ground attack aircraft
9
Zodiac eugenics
2
Would this giant rotating shotgun weapon be effective?