Recently, pictures taken by the New Horizons space probe were released depicting the unusually-shaped object Ultima Thule. Now, suppose there was an world the size of the Earth, but in the shape of Ultima Thule. What would the gravity be like, and if there were oceans, how would the water be distributed?

Also, this is assuming that this world were somehow able to maintain its shape instead of collapsing into itself. 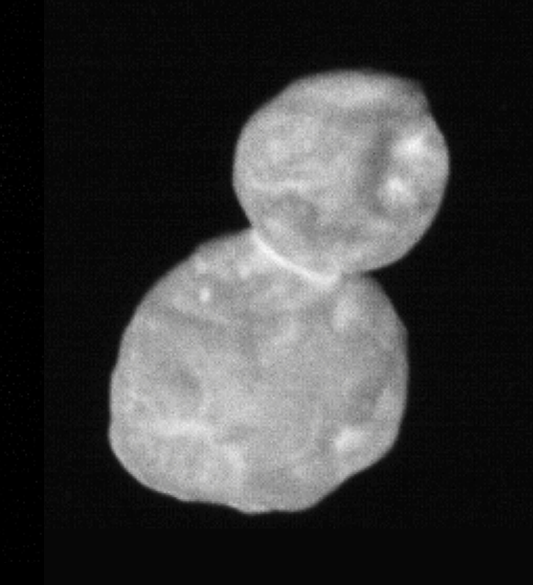 This question is strongly related to this other , therefore I will reuse the answer I posted there:

Even assuming that the above could be avoided, the potatoid resulting from joining the Moon and the Earth would put the rotation of Earth off balance, resulting in quite some vibration while the system rearrange in a new equilibrium position.

Both of the above are highly unpleasant for those thiny things on Earth which we call "life forms", which, being close to the Moon, fall under your question

Summarizing, the gravity will prevent the thing to be stable, and will crumble it into a spheroid. The resulting heating will evaporate any water that should have the fortune of being present on the bodies. 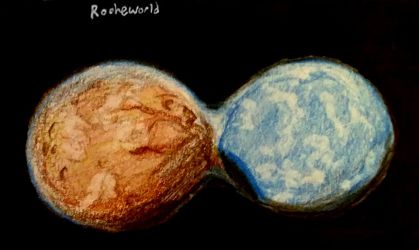 Such a planetary system would be double locked and can share an atmosphere. Eventually they'll end up sharing ocean and land and over the course of geo-theiological time will form a peanut shaped roche world (such as Ultima Thule seems to be) and will eventually collapse into a larger single planet.

Nice views while it lasts!

Double Planets and Roche Worlds: cue it up to about 10:01 to get to the roche world description.

This is with an awful lot of assumptions which are not really viable by any science.

Assumption 2: When scaled up Everything thats effecting the shape ignores the shape but works outside of it as if nothing changed (not feasible to any extend in the real world)

Would change dramatically depending on how far away you are from the Merge as long as you are the same distance away from the merging point Gravity is consistent. (Assuming even density through out the Object)

The lowest gravity is a little north of the Merge as the smaller part is closer and thereby pulls stronger per kg on the observer than the bigger part and can because of that cancel more force from the larger object out. It also could be that there is a point between the two parts where the gravitational pull is not towards the ground but to the left or the right of the observer. (Assuming left or right are defined by where the ground is and not where the gravitational pull pulls you toward)

Water would pile up a bit to the south of the Merge. Anywhere else you would find only very small pockets of water (pond size) if at all.

Atmosphere would behave similar to water with the difference being that you would probably find everywhere at least a little bit of atmosphere gases. Because of the uneven amount of atmosphere around the object pressure near the Merge would be way higher than anywhere else. (This would be counteracted to a degree by the lower gravitational pull near the Merge)

The rings we see on our own earth because of difference in surface temperature would be way thinner and not only caused by the temperature difference but by the differences in atmospheric pressure and gravity.

When given rotation (and rotation speed) and distance from the star as well as star type (and age) I could give basic predictions about weather and flora/fauna.

Not the answer you're looking for? Browse other questions tagged planets physics gravity weather or ask your own question.

6
What would happen to the Moon if it was lowered onto the Earth?

11
A world with a moon orbiting much closer than ours
3
Carbon-based life planet with a plenitude of infinite energy crystals. Could it exist?
9
How fast would a planet have to be spinning for the centrifugal/centripetal force to cancel out the force of gravity near the equator?
4
Planet with Titanic tectonic plate
3
Terraforming an Earth-like Planet
4
Getting energy in the oceans
8
Magic: Reality check of effects of mass-altering magic
35
How Would Civilisations on Different Planes of a Cube Planet Interact?