Let's plot a course between Earth and Gor

We know that Gor, or Counter-Earth, is not stable in a long-term sense. Let's handwave that away, or assume that we are dealing with a temporary span of time in which the instability is immaterial.

Mid-20th to early 21st century Gor and Earth have finally discovered each other and made contact. An alliance of nations on Gor have succeeded in building a space station in Low Gor Orbit (LGO) and are very interested in starting regular passenger/cargo shuttle flights to Earth's International Space Station.

What trajectory would a more-or-less contemporary crewed spaceship use to travel between Earth orbit and Counter-Earth orbit? We are dealing with civilizations that are, technologically, more or less anywhere between Earth's mid 20th century and a few decades from now. That is, incremental advances in technology (e.g. slightly more accurate thrusters, 10% more effective radiation shielding, or tastier meals-in-a-pill) are fine, but no Stargates or Millenium Falcons. The trip should be as short as reasonably possible, but should keep the persons on board reasonably safe. Spaceman Thumper reminds you that if you fly directly into the Sun, you are going to have a bad time.

I'm imagining that ships would simply drop into an elliptical orbit that would put them onto a trajectory to intercept the other Earth, but what would that look like? Would such an orbit be quick and reasonably achievable, or are our hypothetical cross-world pioneers going to be wandering around the Solar System like Odysseus?

Economic issues (exactly who pays for what, who gets to purchase the first interplanetary tickets, etc.) are out of scope for this question unless there is a particular reason they need to be included. Assume that governments on both planets are treating this as a high priority project and are able to provide at least as much funding as modern-day space programs receive.

As for spacecraft design, I am imagining something reasonably similar to modern designs, with the obvious caveat that such an interplanetary shuttle won't need to take off or land and so could forgo much of the equipment found on, e.g., the Space Shuttle or Soyuz. Instead, such a ship could that space for whatever it needs to maneuver in space or keep the occupants alive. Modern designs for non-atmospheric craft that have never been built but appear spaceworthy are obviously acceptable.

In astrodynamics, orbit phasing is the adjustment of the time-position of spacecraft along its orbit, usually described as adjusting the orbiting spacecraft's true anomaly. Orbital phasing is primarily used in scenarios where a spacecraft in a given orbit must be moved to a different location within the same orbit.

You have two points in the same orbit and you're trying to transfer from one to the other. Normally this procedure applies to objects in Earth orbits and hence the phase angle refers to the position of the object relative to Earth and the Sun. In this case you're looking at the Solar orbit but the principle is the same. 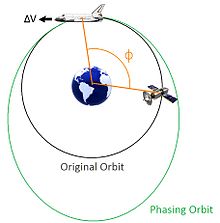 These kinds of questions are fun. 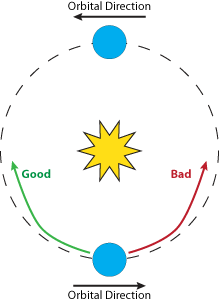 In this case we have the most fuel efficient solution because all we need is to get the ship out of our atmosphere. If all it did was sit there with a relative velocity of zero, 180 days later it would collide with Gor. However, cheap as it may be, time is money! We need a faster solution, but preferrably one that doesn't cost us a mint. 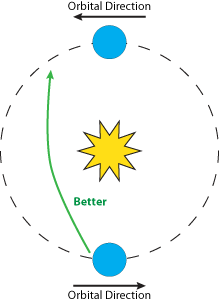 Let's use some real data to ship some cargo. Humans will be slower because, well, we hate being squished. Therefore, let's use New Horizons as our benchmark. It left the Earth at a screaming 16.26 Km/s and passed the moon's orbit in just 8.5 hours. Smokin'! But the moon's a kicked can compared to Gor.

Now, here's where I'm very happy you didn't include the hard-science tag. I stink at orbital mechanics. I'm slowly working through a textbook on it, but I'm not to the point I can just pull the math out of my head. Not by a long shot. But, here's the gist.

What would be the actual shortest path given all of the above? Well, you need the circumference of the orbit (940x106 Km) and you need the effect of the Sun's gravity (274 m/s2) and you need our reference intial velocity (V0 = 16.26 Km/s) and then [magic happens here].

What can I say. I'm not to that point in the book, yet.

If HDE 226868 or Kingledion answer, be sure to upvote them. They are initiates of the inner circle and know the correct incantations and which Demon to invoke to provide an actual, numerical answer.

The travel time is dependent on your $\Delta v$ budget. More $\Delta v$, the quicker you go.

The bare minimum (least fuel costly) you can do is a $\Delta v$ burn arbitrarily close to Earth's escape velocity (about $11.2 km/s$) where you could slowly inch ahead of the Earth on a slightly faster orbit until you reached the L3 Lagrange point (the position of Gor), where you would perform a near-zero $\Delta v$ burn to slow to a stop relative to Gor. This approach necessitates very, very long travel times, which we do not want, yet, it is the most fuel efficient. This approach also gets you at L3, but you could just as easily carry the fuel instead to inject into a circular orbit around Gor (for LEO, a $\Delta v$ of $3.4 km/s$).

This trajectory would take you $38,700,000 km$ from the Sun, still a greater distance from the Sun than Mercury, so you probably don't have to worry about the whole solar atmosphere thing. However, $18.3 km/s$ is quite a lot of $\Delta v$. For perspective, the multi-stage Saturn V had a total $\Delta v$ of about $17.9 km/s$ (if launched from rest in empty space).

Not the answer you're looking for? Browse other questions tagged science-based space-travel orbital-mechanics modern-age counter-earth or ask your own question.

23
What are the possibilities of a dwarf planet orbiting opposite Earth's orbit?
9
If there was a Counter-Earth on the other side of the Sun, when would it have been discovered?

20
Traffic in Space (a traffic controller for low earth orbit)
7
Making a Counter-Earth
6
How powerful does an orbital laser cannon need to be?
58
Is space piracy orbitally practical?
23
How can I prevent Kessler Syndrome among space stations?
9
Satellite salvaging: safely de-orbit and retrieve spacecraft or other objects
0
What materials would be useful in constructing a Space Station?
4
How could you tell if someone was messing around with your gravity?
17
Software that shows space travel accurately in 3d from a physics point of view
0
Fuel for a commercial space shuttle