Can planets collide and not melt together?

Ok so I've been going around on the internet trying to figure out whether or not when 2 earth like planets of similar densities and makeup collide is it possible for them to bounce off of each other or would they just smash into each other or tear each other apart?

It was pretty hard for me to find surfing the web how that would play out. (If there's a way for a crater to form from the collision on like a continent sized scale that'd be great)

If your goal is to have two planets that have collided in the past and still exist, you can make a "grazing" collision between two planets that had very different relative velocities. Basically your planet was "clipped" by a high-speed object in the past that was already moving at a high enough speed to continue on its current path without becoming gravitationally bound.

Such an impact will naturally be cataclysmic (no way is anything on the surface surviving the event) and can indeed result in a continent-sized "crater", though keep in mind that a crater of this size will not retain its "bowl" shape, but will instead fill with molten rock and solidify into a more-or-less flat "plain". The lunar "seas" are essentially continent-sized craters if you want an idea of how this will look. There is also a high chance that the collision will throw "shrapnel" all over the place and one or both planets may well wind up with a ring of ejected material.

Let's take two twin Earths. Escape velocity from Earth is 11 km/s, which means that the same velocity is what at least you can expect from an object being captured by Earth gravitational field.

This is bad news for your impact: there is no way a body the size and mass of Earth, impacting another Earth at 11 km/s, could make a gentle impact.

It is believed that the impact which generated the Moon, with a body the size of Mars, pumped so much energy into Earth to smelt once more its entire surface. And here we are talking about an even bigger body.

A molten surface is also warranty for no crater to form: any structure created by the impact will flatten out under gravity, more or less what happen to anything you do with molten chocolate.

If the density of the two bodies are different, you can have the remaining of the lightest one floating on the densest one.

Gravity is a very weak force, but planets are very big. When the two planets come within close physical proximity to each other, they will begin affecting each other gravitationally - in basically exactly the same way that the moon causes the tides. Except that the moon is about 2% the size of the Earth.

So your Earth-like planet that comes in for a collision will - when it is at lunar-orbit range - produce tidal forces approx. 50x larger than the tides today. But the distance between the Earth and the Moon is 240-ish thousand miles. The radius of the Earth itself is about 4 thousand-ish miles.

Even a near miss, where the planets never actually collide, will still have a tidal force roughly 3000 times stronger than the one we know. I'm not a geophysicist, so I can't say what exactly that will do. In general, it will not be pretty.

The collision will likely be inelastic

The large tidal force will probably be significant enough to affect the elasticity of the collision. Another thing that will affect it will be the tendency of whatever material is involved in the collision to deform, melt, and basically do a bunch of things will turn kinetic energy from the collision into something else. When that happens, it becomes much less likely that the collision will be elastic ("elastic" meaning "bouncing off like a billiary ball" in a physics context).

The International Astronomical Union (IAU) defined in August 2006 that, in the Solar System, a planet is a celestial body which:

This last requirement makes it difficult, if not impossible, for planets to collide.

Some planets are gaseous/fluid (e.g. Jupiter) and don't have anything solid to melt.

I suspect that any body large enough to meet the second requirement of the IAU definition, colliding at a closing speed anywhere near planetary orbital speeds, is very likely to involve energies easily large enough to convert any solid matter to a fluid of some sort.

If you look at smaller events such as the hypothetical collision between Earth and Theia, there is a fairly thorough coalescence of matter from both bodies.

in the aftermath of the giant impact, while the Earth and the proto-lunar disk were molten and vaporized, 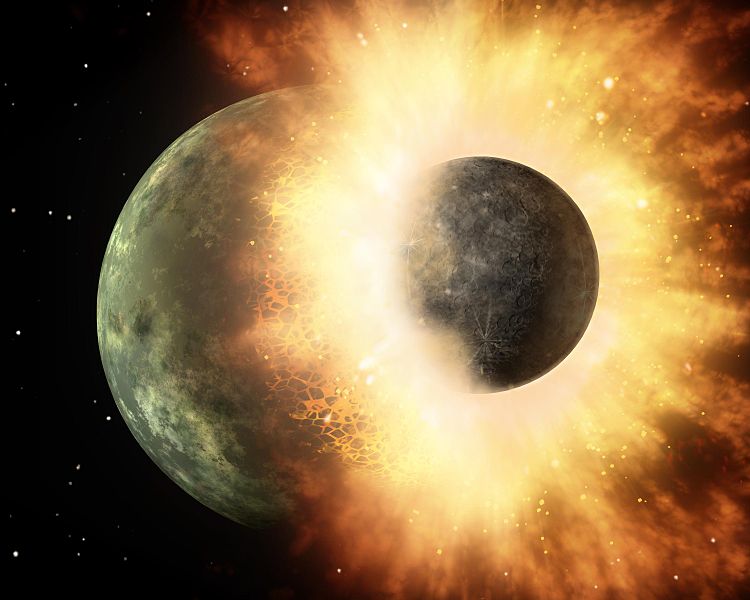 Not the answer you're looking for? Browse other questions tagged planets astrophysics or ask your own question.

14
Could it be possible for two planets to collide and not kill everything?
1
Can you destroy a planet by poking a hole in it?
6
Is it possible to have two or three planets in a stable orbit together?
6
Please help me calculate acceptable planet sizes & eclipse shadows cast by my binary planet system
3
Are my planets too close together?
6
How To Make an Earth with 27 Suns Work, Attempt Two: Orbital Stability