In my fictional world I would like to have something similar to modern optical sensors for things such as aiming systems, night-vision goggles and automaton vision.

The main problem I face is developing an interface between optics and the algorithms to evaluate them.

In modern technology one would have an optical sensor, consisting of multiple components that produce an electrical signal representing the vision. This electrical representation can then be fed into a 'black box that figures it all out'.

In my world however electric circuits are effectively non-existent due to a lack of research and expertise, while mechanical computation (similar to the Analytical Engine) has successfully been miniaturised and optimised to be small, fast and complex enough to support an effective AI-ruler with a mere dozen cathedral-sized halls filled with calculation banks and stores.

The size or cost of the contraptions required is not important.

The usage of biological components (such as real eyes or well-trained dogs) could be begrudgingly accepted, as long as the systems result in a mechanical output.

PS: The things I would like to use this for are (with real-life examples in brackets):

Let's have some fun with this. Now, disclaimer, I'm going to utterly ignore vision replacement, image analysis, and object recognition because I frankly don't believe there's a path from here to there. Hopefully smarter people than I can come up with a believable solution for those, but I can't.

And the idea of putting a key in your prosthetic eye to wind a spring... and then the awful tinnitus you'd experience from the whirring machinery... and your vision would jiggle...

The rest, I believe, is just a matter of creative chemistry.

Light enhancement When I lived in New Mexico, I had a friend in the military who explained the night vision (infrared) goggles he was using. He was no engineer, and so couldn't explain the chemistry involved, but the goggles were entirely passive. They acted as both enhancers and discriminators. The goggles were multi-layered. Some layers filtered out the ambient "we don't want to see that" light while others shifted the frequency of the "light we want to see" into the visible spectrum. Were they as useful/good/efficient as powered goggles? Absolutely not! But they worked....

There are a number of light-sensitive chemicals in the world. If you had a thin enough layer of a sensitive-enough chemical, it would be believable that the layer would illuminate somewhat like the electron-sensitive cathode-ray tubes of yesteryear (the electrons would impact on phosphorous and make it glow). If you had an initial layer that acted as a collimator to focus the light into narrow patches of that sensitive layer, then you'd get crude "dots." If you consider this, there are fluorescent collimators used for overhead lighting. They are covers, divided into grids, and often laminated with a lightly reflective material. The result is light focused more directly downward while blocking acute-angle observation of the source. (Granted, applying the word "collimator" to that description is a bit of a flourish... but it works.)

So, no sensor required for light enhancement.

Object tracking is a bit more complex, but not impossible. Unfortunately, you're in a mechanical and chemical world, which means you have no way to create a reference of your target in software. But, what you could do is use some refracting mirrors that reflect the image "seen" by the turrent onto what at the moment we'll call a piece of paper. You can do this with simple optics and artists have been doing it for a honking long time. There are actually "projectors" that people use to do this very thing — but I can't find a link with a quick Google search because projectors have become such a ubiquitous part of our lives they overwhelm the search. I haven't used one since grade school, cumbersome beasties.

Anyway, once you have the image someplace useful, we're back to chemistry. There is no way on earth that you can process 3D imagery using Victorian tech. Therefore, we're working with blobs, and the goal is to keep the blob in the center of the aiming reticle.

Here's where I wish I was a chemical engineer. Think of the old silver oxide photographic tech. You're going to get light and dark images. so, rather than having a piece of photo paper, you have some of that light-sensitive chemical in a grid where the piece of paper once resided. And below it, something that reacts to the presence of the light-sensitive chemical, only it's blocked by half. (hold your breath...) once someone screams "Mark!", the gunner shifts a lever that allows these chemicals to start "tracking."

What's really happening is that as the ratio of light-vs-dark changes on the half-plate below the gridded top-plate, the chemical reaction pulls or pushes (an incredibly light) lever, which trips gears to cause forward/reverse rotation. They'll jiggle back and forth with the shift in the light/dark pattern and, basically (and very roughly) hold the reticle "on target."

OBVIOUSLY there are tremendous real-life weaknesses with this.

The problem with actual patten matching is that every time you change your angle of approach to the target, you're changing the reference image. In other words, you can't simply use a cutout as the reference. That would only work if the two of you were standing still — and you wouldn't need target tracking for that.

Last, but not least, is auto-focus. This one might actually be the simplest of the three... at least until you need to convert the results to mechanical action. There are several ways to achieve passive autofocus. I think the one that will work best is phase detection. We want to use a couple of pinholes (like the old artists used to capture an image to pain, earlier link). 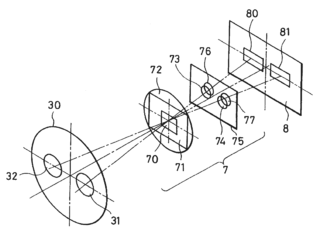 Image care of the earlier Wiki link. Simplifying this something awful, you're trying to get only one glowing dot on your light-sensitive chemical, not two. But, think of it this way, if you have two small pools of chemical separated by a very thin barrier such that when you're in focus there is no dot, then all we need is a simple auger gear to move the focusing lense back and forth until the dot is gone. And that brings us back to the featherlight lever that warps with the chemical as the chemical reacts to light that I described for the turret.

But what about my computers?

OK, I'm having a bit of trouble working in the difference engines because I know what they are and how they work. They are NOT direct replacements for modern computers. Not by any stretch of the imagination. Did you ever see the movie Hidden Figures? That big-old honking IBM was basically a difference engine running ballistic math problems, and look at its size and complexity just to read punch cards. If you want a better example, watch The Imitation Game. Yeah, that big brick of an object running on a bazzilion electric motors that was parametrically programmable but not actually programmable? That's a modern babbage engine. Today a single microchip is many orders of magnitude more powerful — and we need multiple cores for decent image recognition. I, personally, can't choke down treating babbage engines as actual computers. They were large and complicated adding machines. Basically cash registers. Sorry. But that's why I haven't described how to create "software" for difference engines that would make your steampunk story look a bit more modern.

I think a believable set of solutions for the three desired outcomes I mention are obtainable. You'd need an actual Chem-E to work out the details — and it would be dog-slow and fragile! but it would work.

And once you have a believable solution, it's only a process of glass-blowing and a bit of handwaving to create working scenarios.

As far as I understand, you are quite out of luck with optical sensors in the Victorian era.

So, tubes are probably our best bet.

The problem with tubes in the Victorian era is that tubes are pretty much hardcore hightech. (Semiconductors are even more hightech, search for the purity of silicium for P- and N-doping.)

My verdict: It's so far from then-current state of the art, so esoteric, and so resource-hungry that you'd fail to convince anyone to invest money in such a project.

Not the answer you're looking for? Browse other questions tagged vision victorian-era or ask your own question.

6
What is the earliest time a pulsejet could be built?

28
Victorian Ship Weighing
4
How much to charge for fictional substances in Victorian England setting?
2
What economic effects would magically-enforced isolation have on the Victorian age British Empire?
11
Victorian CCTV?
10
Could 'robotic' prostheses be possible in the victorian era?
4
Victorian long-distance express transport?
6
Smallest possible Victorian cogwheel size
5
Storm-proofing Late-Victorian Aircraft
39
What is the highest level of accuracy in motion control a Victorian society could achieve?