Why do witches have non-magical bodyguards?

Witches exist at all levels of society, including the top echelons. These individuals summon the orgone within themselves to perform various feats of magic through invocations. One brand of magic revolves around battle. These attacks can be very powerful, and consist of magical attacks and defenses. Some are designed to focus on a particular opponent, such as fireballs and beams of energy. Others are geared toward an entire area, such as lightning storms or small tornadoes, which can kill dozens if not hundreds of people. Still others focus completely on defending the user, such as magically generated shields or protective spells. Battle magic is powerful, and can turn the tide in war. However, they have some limitations which can effect their success.

Basically, witches can be walking, fleshy tanks, and are very valuable to their societies. However, they can also be targets for assassination or sabotage by other rival covens or states. Therefore, they are often heavily protected by shield guards. The job of these guards is to keep their witch alive, and protect them while they are performing their invocations. They can range from one to several, depending on the importance and wealth of the witch.

It would be common sense for witches to use other witches to guard them, as one can focus on defense while the other on attacks. This would provide for an impenetrable combination. However, shield guards are always magic less. Instead, they use regular weapons to protect their wards.

Why would witches not use lower-tier witches to defend them and entrust their safety to non-magic users?

Range of regular 9mm pistol: from 50 (effective) to 100 meters, according to Wikipedia. A rifle can do a few hundred meters for effective range, and kilometers for maximum range.

Range of a mage:

I don't know how much "a few dozen feet" is for most people, but for example five dozen feet are a little less than 19 meters.

People in your world probably say things like "Don't bring spells to a gunfight".

Ammo for guns is only ever spent when you fire the gun. The ammo for spells, though, is mana (called orgone in your world), which is spent when you cast. A mage may find theirself out of mana to cast a fireball because they had been repeatedly casting non-combat spells, such as Mine Manacoin or Naruto's spell Sexy no Jutsu.

Witches exist at the top echelons of society.

But regular bodyguards don't. I am quite sure the salary of a gun-bearing goon is orders of magnitude smaller than that of a witch. 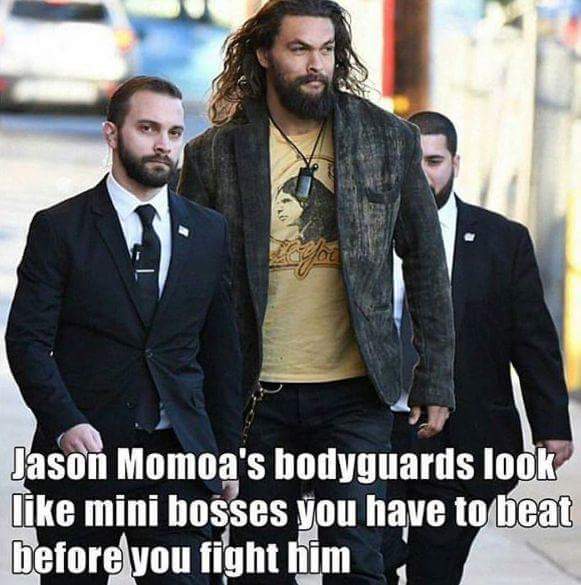 Sure, they are less muscle than Momoa himself in a fight. But I bet their salary is less than, say, Terry Crews's and The Rock's.

Body guards are supposed to cover the weak points of the target.

Invocations can last anywhere from 30 seconds to 5 minutes depending on the type and Power of the attack.

Imagine how nice would it be that while the primary target is busy buzzing the main invocation, also the bodyguards start buzzing some other invocations. This would leave at least 5 seconds of vulnerability to a non magic attacker, or, even worse, would be totally useless against a ranged attack (an arrow takes less than 5 seconds to hit).

Therefore the bodyguards need to make a living testudo around their protegee, protecting the openings which are not well protected by magic.

Two witches performing magic in very close proximity to each other cause interference to each others magical "field".
This causes spells to have reduced effect or even total misfires (possibly causing harm to their own side or even themselves).
Additionally the witches have to pour more orgone into each spell to overcome the disturbance. This in turn causes more interference, etc. It also means the witch gets exhausted quicker.

So it is best to use non-magical guards as body-guard/flesh-shields. Especially as (non-magical) flesh also serves as a damper on the interference itself. This allows for some cooperation between witches, but doesn't let them work closely enough together that they can be effectively be guarding each other.

If a witch can draw orgone from other people (non-magical) the body-guard can also serve as an additional power-source for the witch.

If two witches are casting spells one near the other, their magical energies start disturbing and causing an error in their spells. This disturbing in the magical field can increase the casting time, decrease the power of the spell, their accuracy or even make them untestable and explode. That is why witches use non-magical bodyguards.

They are "very valuable" for society. Too much

As you said, they are very valuable, that means expensive. Hire a witch as a bodyguard is very expensive, you could hire a dozen magicless bodyguards.

Witches use to envy and hate other witches, all of them want to be the most famous and powerful, and so they can't have another witch as a friend, one of them would backstab the other at some time.

Magics takes time and energy to cast. If two witches were casting a spell at the same time, during a few seconds they would be vulnerable. Magicless bodyguards don't cast magic, and so they can protect witches while they cast magic.

Even more, what if a powerful rival witch cast anti-magic? Both the witch and his witch bodyguard would be useless. Having a bodyguard which doesn't relieve on magic is can literally save your life.

Witches coordinating and protecting each other

While it is not plausible to have Witches protecting each other outside of battlefield, coordinating Witches IS a plausible battlefield tactic. One Witch could shield against attacks, while another is summoning up a powerful lightning bolt. And each Witch could take turns attacking and defending, without any of them being of a lower rank.

Why this tactic is rarely used

Note: some of this answer is based on more recent developments in your magic system, that do not appear to have been established at the time this question was asked.

Limited resources
Eventually the defensive and offensive casters will run out of orgone, and then they're toast. A non-magical body-guard is able to continue fighting and protecting for much longer than the casters orgone supply will last. When they run out, their body-guard will keep them save until they can get to a safe place to recharge.

Additional resources
If the caster's body-guard is capable of storing orgone and allowing the caster to channel it, they not only gain protection, but also access to far more resources. This greatly extends their spell casting ability in ways that another caster cannot.

Vulnerability while defending another
It may be possible to target multiple entities simultaneously, but it is extremely difficult and requires immense focus. This is especially prominent when channeling defensive magic because the effects are only active while being channeled. You cannot just put a shield around someone and go back to other things, you must actively maintain the shield without losing focus. This means the caster can effectively focus on defending them self OR another, but not both (at least not with significant weakening of the effects). So, if they are focused on defending another caster, they are left extremely vulnerable themselves. This tactic is not uncommon, with certain casters specializing in defense magic, but it is only workable if there is also a body-guard (or multiple in some cases), trained in advanced physical combat, as it is not possible for them to defend the caster without also defending them self.

47
What can be used as a money in a high-fantasy magic world where noble metals are in practical use?
16
How can I protect witches in combat who wear limited clothing?

15
How to realistically implement magic-users in medieval warfare?
8
how can warlocks be prevented from taking over a coven?
16
How can I protect witches in combat who wear limited clothing?
3
how can non-magical soldiers gain power from a magic ritual without making its participants weaker?
4
How can witches combine their power without disrupting each other's magical field?
4
How can an individual provide a higher quality of energy the more depleted it becomes?
7
Why would witches be incapable of using wands?